Did Valerie Jarrett secretly leak the details of former Secretary of State Hillary Clinton’s private email account to the media? 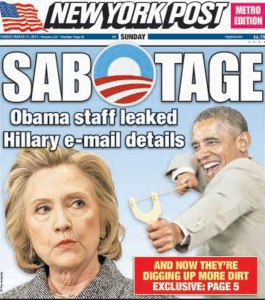 That’s “nonsense” and “utter baloney” according to the White House.

The New York Post story by Edward Klein cites anonymous sources suggesting that Jarrett not only leaked the details of Hillary Clinton’s use of a private email address, but pushed six separate State Department probes into her behavior.

Klein also cited sources that Jarrett “put out word” to reporters that the White House would look on with favor if they “gave Monica Lewinsky some ink and airtime” and was holding “secret meetings” with former Maryland Gov. Martin O’Malley and Sen. Elizabeth Warren of Massachusetts.

“These uncorroborated, third-hand allegations are not only nonsense, they are simply not true,” she said in an email.

A senior White House official emailed a Washington Post roundup of both conservative and liberal critics who roundly criticized Klein’s book – a sign that the Obama administration had no intention of taking his report seriously.