LYNCHBURG, Virginia — Inside the Carter Glass Mansion on the campus of Liberty University here, Sen. Ted Cruz (R-TX) was gracious enough to allow Breitbart News to capture some photos of him and his family—wife Heidi and daughters Caroline and Catherine—as the potential first family got ready for bed ahead of the senator’s big speech on Monday morning.

The Cruz family, and the senator’s campaign staff, stayed there on Sunday evening before Cruz’s speech to Liberty University’s convocation on Monday morning. Just hours after these pictures were taken, Cruz announced his campaign for the presidency of the United States via Twitter. He’s set to make a speech doing so at Liberty, becoming the first declared candidate in 2016 on either the Republican or Democratic side. He’s also the first serious candidate for the presidency to announce via Twitter.

Caroline and Catherine joined Heidi and Ted back around the dinner table for these photos after getting into their pajamas for some cookies before bed. Caroline is 6 years old and Catherine is 3 years old.

Heidi and Ted first met while working on George W. Bush’s 2000 presidential campaign, and have been a force together ever since. After the campaign, Heidi worked for Condoleezza Rice’s National Security Council and for the U.S. Treasury before becoming a managing director for Goldman Sachs in Houston.

While in Spartanburg, South Carolina, last fall during a women’s forum, Cruz talked about his oldest daughter Caroline—who was there with him and Heidi—reacting to the world of politics.

“Back when I was running for the Senate in 2012, we were going around the clock and one Saturday morning Caroline–who’s here in the audience–on Saturday morning at 6:30 in the morning, I was doing a radio interview on the phone,” Cruz said on the stage. “Caroline jumped out of bed and came running into our bedroom like she does on most Saturday mornings. Heidi was still lying in bed, and Heidi jumped out of bed. She grabbed Caroline and she brought her into the living room. She said, ‘not now sweetie. Daddy’s doing a radio interview.’ Caroline crossed her arms and stomped back and said ‘politics, politics, politics! It’s always politics!’”

During that event in South Carolina, Cruz discussed a lot too about how he met Heidi–along with two other women, his mother and his aunt, who have been crucial to making him who he is today–and joked about how they met on the George W. Bush campaign.

“Heidi and I met on January 3, 2000,” Cruz said. “We were both working on the George W. Bush presidential campaign in Austin, Texas. We were actually one of eight marriages that came out of the Bush campaign–which leads to a lousy joke that I’ve told many, many times, which is: no matter what else you think of George W. Bush, in our house he will always be a uniter and not a divider.” 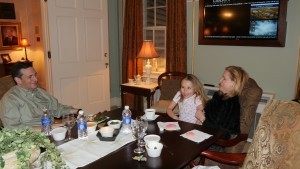 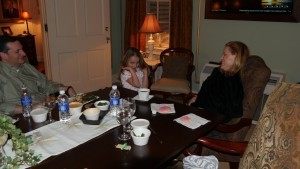 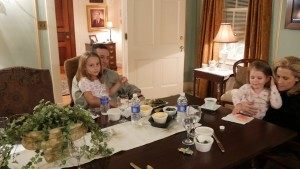 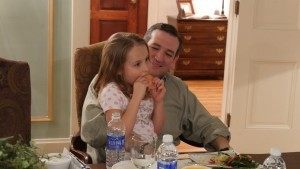 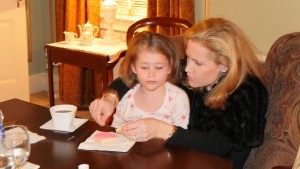