The 2016 presidential race has only just begun, and we already have an unforgettable image for the history books: a pack of salivating reporters racing after Hillary Clinton’s taxpayer-funded “Mystery Machine” van, like a flock of pigeons chasing after scattered birdseed.  Conservative humorist Iowahawk dubbed it “the stampede of the majestic North American Throne-Sniffers.” The Washington Free Beacon spliced in the theme music from the old Benny Hill comedy show to create the perfect viewing experience:

There’s another image I would submit for the history books: Hillary’s campaign gearing up to use an old publicity still of then-SecState Clinton using a Blackberry. 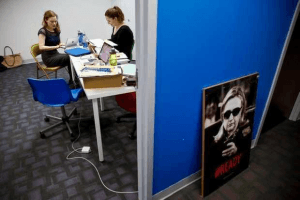 Here’s the thing, Media – it’s your job to remind Americans that Hillary’s under a thick cloud of scandal, and may end up under indictment, for running the off-the-books email server she was plugged into with that BlackBerry. It’s your job to remind American voters, over and over again, that Clinton jeopardized national security and deliberately violated transparency laws by doing this, and when she got caught, she looked the American people right in the eye and lied extravagantly and demonstrably about setting up her shadow server because she didn’t want to carry two portable electronic devices to check her mail.

That’s not a Republican “talking point” – it’s crucial to who Hillary Clinton is, and how she views herself in relation to the Little People. It says more about her arrogant view of the proletariat and disdain for accountability than a hundred speeches. She hasn’t “addressed” or “dealt with” the email scandal, and it’s not “old news.”  In fact, we’re just learning today that Clinton was directly asked if she was running a private mail server by Congress in 2012, and both she and her Department blew off the question.

That’s not okay, no matter which party the Secretary of State belongs to, and which party is running either or both houses of Congress. And it’s highly relevant to the question of whether such an individual can be trusted with any important government job, let alone the presidency.

This is going to be tough for you, Media, because everyone knows 80 to 90 percent of you vote Democrat. Heck, a lot of you are former operatives of Democrat political machines, or you’re dreaming about getting a job in the next Democrat Administration. You love Barack Obama with romantic passion, and you know his “legacy” cannot be cemented – either as media myth, or policy fact – if he’s succeeded by a Republican. You weren’t about to let him lose his re-election bid in 2012, because that would have destroyed the myth, and even if – let’s be brutally honest here – some of you don’t swoon over Hillary Clinton the same way, you’ll push her a bit harder because you know Hillary 2016 is also the epilogue of the Obama presidency.

Also, you’re collectivists to the depths of your souls. You see everything in terms of group identity and power politics. Hillary’s symbolic importance as the First! Woman! President! will override many doubts you might feel about her personally. For the same reason, your loathing of Flyover Country and its Republican candidates makes it difficult for you to see them clearly as individuals.

But you have to put all that aside and do your jobs, Media, because it’s important to the electoral process. Also, you might not realize how close you’re coming to alienating your audience completely. They’ve already developed very low opinions of you. Actively helping Hillary Clinton sell her preposterous Astroturf campaign as a “grassroots” success will turn them off even more.

That means you have to report, prominently, that reporters outnumbered actual voters at her “big Iowa event” by four to one.  It means you have to mention that half of her supposedly impressive Twitter following consists of bought-and-paid-for fake accounts. It means that when a woman who pockets some $200k from supposedly cash-strapped universities for speeches, runs a foundation stuffed with foreign megabucks, claimed she was “dead broke” at a time when she owned two mansions, and has a daughter who was paid in the high six figures by a “news” organization for doing virtually nothing declares herself the champion of the little people, you need to point out how ridiculous that is. Likewise, the things she did to protect her husband from the consequences of his infidelity in the Nineties are highly relevant to her posturing as a feminist heroine. It’s all transparently foolish, and the American people are counting on you to penetrate thin veils of deception.

Most importantly, it means you have to attack Hillary Clinton, the same way you’ve attacked each declared Republican candidate. You shouldn’t manufacture narratives, like the one you tried to build about Rand Paul being a hot-tempered misogynist. But generally speaking, the aggressively skeptical approach you take with Republicans is the right way to go, and you need to go that way with Democrats, too.

It’s hard, because you agree with them, and you’re especially enthusiastic about their Washington-centered world view. You love covering royalty and swooning over titans. You love having power concentrated in a few big cities where you can maintain comfortable offices, and put together great stories about the mighty deeds of Big Government with a few quick phone calls to the right people. You love being part of that power structure, and the larger it grows, the bigger you feel. You want to change the world, so you gravitate to people who demand the coercive power necessary to make those big changes.

But you’re not supposed to be activists, or political operatives. Nothing makes you angrier than Republican candidates pushing back and describing you that way. No, as soon as such an accusation is leveled, you cry that you’re objective, dammit! You’re pure seekers of unvarnished truth! You’re asking tough questions on behalf of those who would otherwise have no voice! Well, here’s an opportunity to prove it. You’ve failed your last few tests, very badly, but the abrasive and tin-eared Hillary Clinton should give you a relatively easy workout to build up your objectivity and skepticism muscles. You’ll know you’re making progress when none of her supporters feel comfortable making posters with her holding the Blackberry she lied about.

Update, 5:00 PM EST: Will we have to abandon the American mainstream media entirely and turn to foreign reporters for real stories about Hillary’s Astroturf campaign?  Over at ABC News, we’ve got a “senior national correspondent” slobbering over Clinton working off her shoe leather and winning over voters “one handshake, one chai at a time…” but the UK Daily Mail reveals her coffee-shop meetings are pure political theater, with her campaign staff actually driving activists, lobbyists, and Hillary groupies to sip those chai lattes with her.

Why bother with those extensively-funded mainstream media outlets and their high-priced on-air “talent” when you can get the same propaganda delivered straight to your inbox every morning by giving Hillary’s campaign your email address?