Breitbart News covers breaking updates from Wednesday night’s protests over the death of Freddie Gray. Will they be a repeat of Monday night’s riots and looting? Or will the police keep the peace with a mandatory curfew, as they did Tuesday night?

#DonLemon called @BaltimorePolice on me said there was a man impersonating a reporter on the area & needs to be removed. Video coming…

Excuse my French, but we looked #DonLemon straight in the eye & told him "FUCK YOU DON LEMON!" and "FUCK YOU CNN!" multiple times

Fuck you @donlemon! Don't come to Baltimore & try to big time on me.

Going to make sure wherever @CNN is in Baltimore, we're ruining their shots. By many means necessary. This is war @donlemon!

.@donlemon, unlike a punk like you, I don't need 15 hired goons to protect me when I'm working in Baltimore. Big frickin coward!

12:10 AM EST: Dust has settled for the night. Check out some notable photos from the evening’s events: 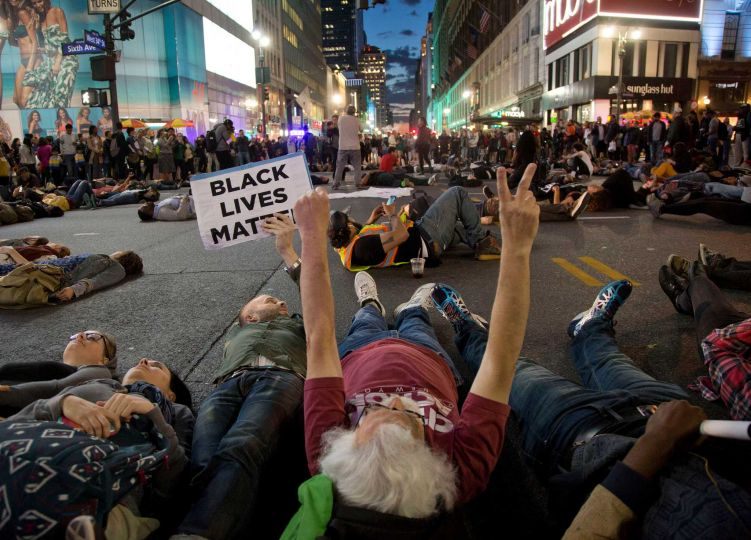 Protesters lay in the street to stage a die-in at Herald Square, Wednesday, April 29, 2015, in New York. Several hundred people gathered in New York on Wednesday to protest the death of Freddie Gray, a Baltimore man who was critically injured in police custody, and more than a dozen were arrested. (AP Photo/Julie Jacobson) 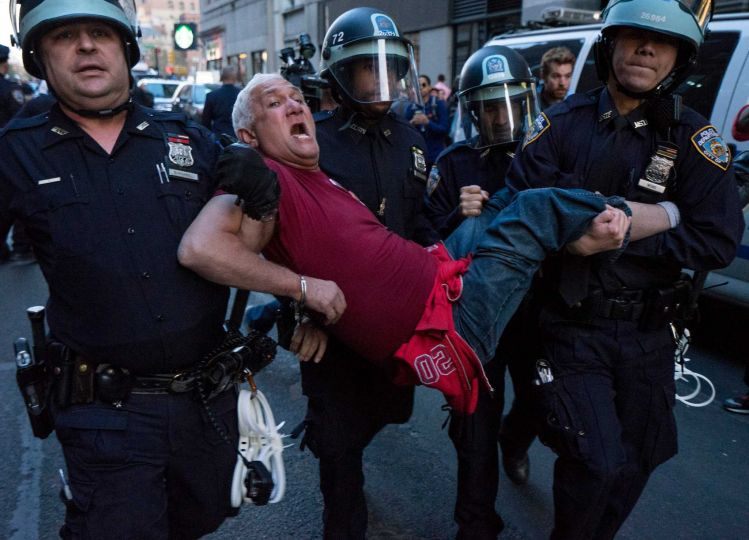 A man is carried by police officers as arrests are made at Union Square, Wednesday, April 29, 2015, in New York. People gathered to protest the death of Freddie Gray, a Baltimore man who was critically injured in police custody. (AP Photo/Craig Ruttle) 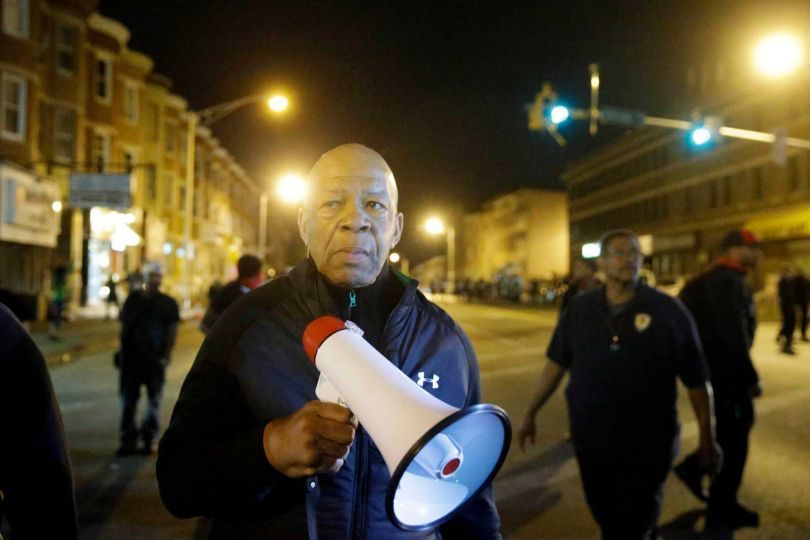 U.S. Rep. Elijah Cummings, D-Md., encourages protesters to comply with the 10 p.m. curfew Wednesday, April 29, 2015, in Baltimore. The curfew was imposed after unrest in Baltimore over the death of Freddie Gray while in police custody. (AP Photo/Matt Rourke) 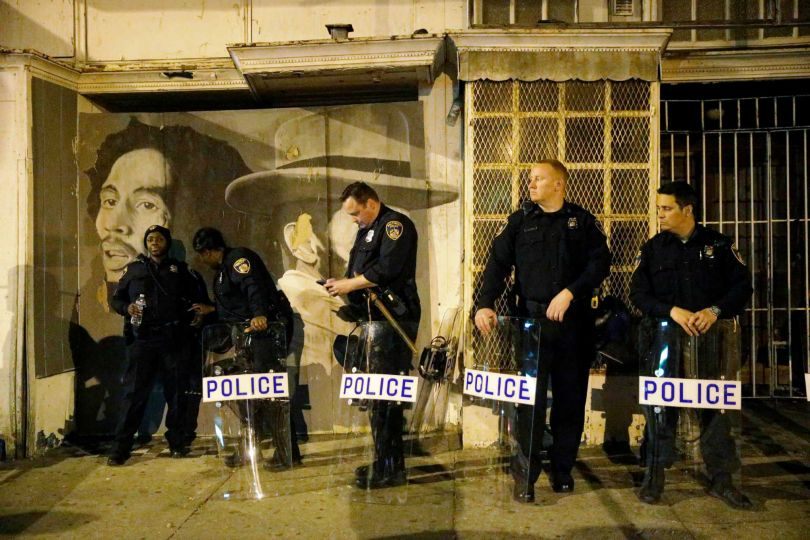 Police prepare ahead of a 10 p.m. curfew Wednesday, April 29, 2015, in Baltimore. The curfew was imposed after unrest in Baltimore over the death of Freddie Gray while in police custody. (AP Photo/Matt Rourke)

Arrest on w. north avenue. "Take a picture. I didn't do nothing' pic.twitter.com/OUef7beZR8

10:46 PM EST: The National Lawyers Guild says that over 100 people were arrested in New York City by 9 PM. Washington Times says it was about 60 through the night.

About fifty people were reportedly protesting by KTRK ABC13 in Houston. At that scene, protesters held up signs saying “Honk for Justice,” and “America’s worst nightmare.” These signs were accompanied by other anti-police signs as well.

Multiple groups have converged at Times Square, protesters cheering as they come together #Baltimore2NYC pic.twitter.com/Gbfp5NDqrt

10:18 PM EST: Curfew’s calm, except that same guy is saying he’s gonna do something to Geraldo on camera. Watch out, Geraldo!

15 minutes into the curfew, a group of people (albeit many of them media) still hanging out at Pennsylvania & North pic.twitter.com/odrgz65Ivd

Cooking up a special surprise for #Geraldo, will be caught on video and he doesn't even know it yet.

10:10 PM EST: One of the most vocal anti-cop demonstrators jokes about attacking Geraldo Rivera.

The curfew begins in Baltimore. At scene of previous unrest there is a single firework and message from a helicopter. But place mostly empty

9:52 PM EST: The fight appears to have drawn out police in riot gear with about 10 minutes until curfew.

Not as tense as yesterday was leading up to the curfew, though chopper is still above and a fight did just break out for a sec. #Baltimore

According to police: Prisoner in van said Freddie Gray was ‘banging against the walls’ during ride http://t.co/2tFru2VyTT

A prisoner sharing a police transport van with Freddie Gray told investigators that he could hear Gray “banging against the walls” of the vehicle and believed he “was intentionally trying to injure himself,” according to an investigative document obtained by the Washington Post.

9:12 PM EST: Not breaking: a man has been dubbed the “Baltimore Batman” for defending the bar where he is a bouncer on Monday night. Brian Woodyard “went back to work dressed in a black jacket and medical face mask yielding a machete when more rioters came down the block. He kept nearly 50 looters out of the bar.”

Less than one hour until curfew.

People from around the region have been dropping off food to police officers throughout the city. We appreciate your support. Thank you!

8:42 PM EST: CNN ripping the lid off the big questions in this story.

Protests are going down in multiple cities and CNN is talking about the word "thug."

8:39 PM EST: The arrests keep coming in NYC. Mayor Bill de Blasio urges protesters to stay peaceful: ““I’d say that if you want to make change, keep things peaceful. When anyone gets involved in violent protests, it denigrates their cause.”

8:24 PM EST: No charges for the 101 rioting suspects from Monday night.

We'll have a full story up later, but this was the result of an executive order from Hogan allowing people to be held for longer than normal

Police say in the chaos they had trouble matching people to officers who arrested them; some could still be charged after investigation

Baltimore Mayor Stephanie Rawlings-Blake ordered the police to stand down as riots and looting broke out across they city, a new report claims.

This comes as the Baltimore police said they did not expect the police report into the death of Freddie Gray to be released this Friday as was expected.

According to a senior law enforcement source, the embattled mayor effectively told her officers to do nothing as the city began to burn – raising questions as to whether the rioting could have been stopped.

8:07 PM EST: Not breaking: earlier today, a prayer circle formed near a church which was set on fire by rioters Monday. “We know that the devil, whatever he meant for evil, God is gonna turn around,” one participant says.

7:54 PM EST: Protest remains peaceful so far. Most of the people arrested Monday are being released–while NYPD is making a good number of arrests right now.

The group of protesters are now at 1500 North Charles Street (Penn Station).

#Urgent: More than 100 people arrested in Baltimore Monday being released

VIDEO: This March in #Baltimore is seriously massive pic.twitter.com/PJJsQ1pyfu

7:21 PM EST: In a move sure to make everyone angrier, the city will not release the results of its investigation into Gray’s death to the public.

The Baltimore Police Department said Wednesday the results of its investigation into the Freddie Gray’s death will go directly to the State’s Attorney’s Office, not to the public.

“We cannot release all of this information to the public because if there is a decision to charge in any event by the State’s Attorney’s Office, the integrity of that investigation has to be protected,” said Police Captain Eric Kowalczyk.