Last weekend my Facebook and Twitter newsfeeds were flooded with Comic-Con news and movie trailers. The comic book world is no longer just for nerds thanks to their success on TV, in movies and in licensing merchandise. What was once a subculture is now pop culture.

I’m sure many people can identify with Groundhog Day and feeling like you’re living the same day over and over. I often feel like I’m writing the same article over and over, but with a different hook. I imagine Andrew Breitbart felt that way, which is why nearly everyone who ever met him heard him say, “Politics is downstream from culture.”

An estimated 130,000 people attended the San Diego Comic-Con this year. As one website noted, that’s more than a lot of cities, including some state capitals. Many brands that have nothing to do with the entertainment industry go. We often forget that we have a brand — freedom. Another thing Breitbart said was, “If you can’t sell freedom and liberty, you suck.”

It’s not enough to be at the conservative conferences (and I say that as the former director of CPAC). I’m not talking about setting up shop at a Comic-Con with a bunch of [Candidate Name] 2016 buttons and GOP tchotchkes. I’m talking about letting them know we’re willing to engage. Rep. John Lewis (D-GA) attended to promote his illustrated biography, March. Hillary Clinton did the bare minimum and it was actually pretty cool:

As I wrote last week, the 2016 election is a great opportunity to take advantage of the fact that our side is the one with young, energized candidates. An example of how much potential our side has can be seen in this rather lame showing at Comic-Con in favor of Bernie Sanders called “Feel the Bern”:

“Comic-Con attracts a lot of nerds. Nerds are very much on top of politics,” the printing shop owner told CQ Roll Call of his decision to stump for the Vermont independent.

Prado erected an eye-catching depiction of the populist pol facing off against the conservative Koch brothers in a Mad Max-like landscape along a heavily traveled crosswalk just outside the bustling entertainment hub. That, coupled with the fire engine-red t-shirt he wore in support of “Bernie Man” — showing Sanders’ signature shock of white hair replaced by flaming coiffure — drew in passersby, many of whom Prado said were not all that familiar with the veteran pol.

The artwork can be seen here. Only a delusional person could imagine a socialist who wants to empower the government as the hero working against two men who actually want to expand freedom. Bernie Sanders at the helm of our government would lead to a Mad Max-style dystopia rather than save it from one.

Overwhelmingly, there was praise for simply engaging. Fans also noticed who wasn’t there. One Comic-Con attendee bristled:

“You think Ted Cruz is going to bring his comic book next time?” one attendee quipped, chuckling to himself at the mere thought of seeing the Texas Republican roaming the convention floor.

I say we call their bluff and start showing up. Here’s the good news — we have the right message. Here’s the bad news — our side often puts very little forethought in attracting and paying for real artists. Instead, we want to hire an intern who knows Photoshop or go to a graphic designer who only has three colors on his palate (red, white and blue).   Many on our side either don’t want to pay for a professional or don’t want to pay money for someone with fresh ideas who works outside of politics.

A few months ago, I got an email asking for recommendations for artists. The person emailing thought he was on the right track by asking for talented video and graphics people. He then made a grave error by telling everyone on the email that it wasn’t an invitation for consulting firms to pitch themselves, but for people who want to be congressional employees. Guess what? Artists don’t want to be congressional employees because (like most Americans) they don’t want to be in D.C. Also, they will avoid that type of full-time work because their creativity will inevitably be stifled. Many artists do political work through consulting firms because it gives them the freedom to be creative in politics and in their artistic world. (Full disclosure: I work for a consulting firm that uses these types of artists who have been successful in fields outside of politics.)

When I attended Phoenix Comic-Con in June, I met several right-of-center artists. In addition to their day jobs in Marvel and DC Comics, they pursued their own projects. Billy Tucci, a giant in the comic book world, wrote and illustrated the comic, A Child is Born. He also does the iconic Sgt. Rock series for DC Comics. I also interviewed Rob Ozborne, who has a fantastic print series portraying the founding fathers as the bad-ass outlaws they were. This is how you sell freedom at Comic-Con. 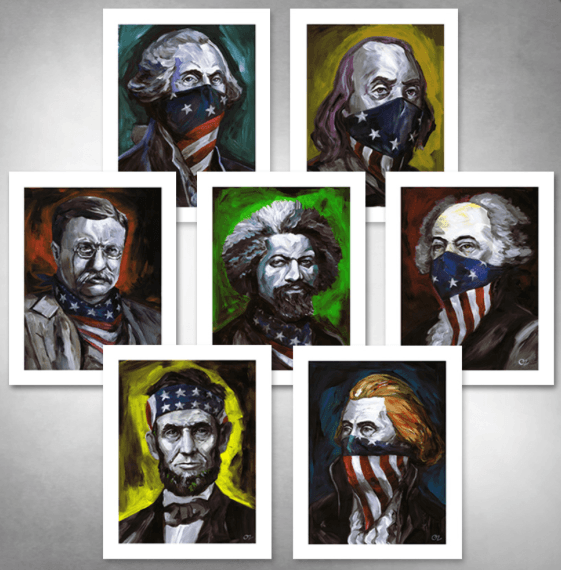 In addition to engagement from candidates and organizations, it would be great to see more right-of-center media covering Comic-Con and other pop culture events. I would have never known about these unique artists if I hadn’t walked the exhibit floor.

I was fortunate to attend Phoenix Comic-Con with Brett R. Smith, a Marvel and DC Comics artist and graphic designer that I’ve been working with on content for my columns. So, in case there was any doubt, I’m not just lecturing conservatives; I’m putting my money where my mouth is by paying a real artist to help me up my game. I’m also excited to announce that Smith will be designing the cover of the second edition of my book, Finding Mr. Righteous. (Don’t worry, I’ll bombard Breitbart readers with more on that later.)

I asked Smith what those on the right can be doing to increase our exposure and “sell freedom.”  He told me:

Those who are Right-leaning or libertarians need to first make the effort to engage more people in places like Comic Con. They need to actually show up. The Left certainly does, so by default they are already winning. Republicans need to take a break from the conventional and expected places to reach out to voters like Iowa, New Hampshire and The Villages and try connecting with potential voters in places like Comic Con.   Republicans have young Gen X candidates who have more things in common with those at Comic Con than the Democrats, whose average age of candidate is 65.

When reaching out to new audiences, there’s no reason to be overtly political. I’m not suggesting that approach, especially at non-political events. It can be as simple as an organization or candidate using a graphic that people are willing to share because it has a right-leaning message, but won’t provoke a fight between friends and family on Facebook. This one is a good example:

Let’s stop yielding the culture to the Left, mainstream media, and career politicians. Think of the founding fathers. They included smugglers, outlaws, drunks, fops, generals, lawyers, and farmers. They beat the British Empire, who at one time controlled a quarter of the world’s population.

We have the message that most Americans are yearning to hear. We just need the right delivery. If we really want to take a pro-freedom message to the people, we have to go to where they go. If we lose in 2016, it won’t be because of the politically-aware on the Left or Right. It will be because we once again showed the middle that we just don’t care about them.

Smith offered this final advice on how we can win in 2016:

The Right needs to embrace and hire more professional artists and pay them a competitive rate to do work for them. Hiring your nephew who just learned Photoshop or Illustrator is not the same as hiring a 20+ year professional who has worked on some of the biggest licenses and properties in the known world. Hire and trust the professionals because so much of what hooks people today is not only a compelling message, but also a compelling image.  An organization or a candidate really needs both to set them selves apart. The Right has substance, but needs style.

As founding father and political punk Thomas Jefferson said, “On matters of style, swim with the current; on matters of principle, stand like a rock.”

(NOTE: Apologies to those who expected a political dissertation on The Avengers. I just really like puns.)