Elsewhere on Internet Cheri Jacobus  picked up Wilson’s genius-baton under the deranged belief that the best way to win elections is by marginalizing and insulting the most reliable of Republican voters.

The genius-consultant baton then jumped to Jacob Perry, a Florida-based consultant who went even further in politicizing the rape threat against Wilson’s child (Perry is also the Chief Strategist for a site many refer to as Pocket Full of Mediocrity.)

Perry claims he’s a friend of Wilson’s but that didn’t stop him from gleefully seizing the rape threat as a political opportunity to attack Breitbart News and pretty much everyone else in the conservative movement. As you’ll see below, this Republican consultant has nothing but dismissive contempt for the millions of everyday voters who make up the conservative base and dare listen to Mark Levin, Sean Hannity and Rush Limbaugh.

As I wrote about Wilson earlier, I have been on social media for going on a decade now, and this is the first time I have ever seen anyone — right, left, or otherwise — politicize a threat of child rape. This behavior is simply beyond the beyond. Just not for Jacob Perry.

Perry went so far as to outright lie with the laughable claim that Breitbart News and Ann Coulter “encourages his/her supporters to threaten bodily harm against a man’s family.” Sleazy, desperate stuff:

Perry then attacked the conservative base as dupes and sheep and “Kool-Aid drinkers” who are conned by Coulter, Levin, Hannity, Limbaugh, etc. 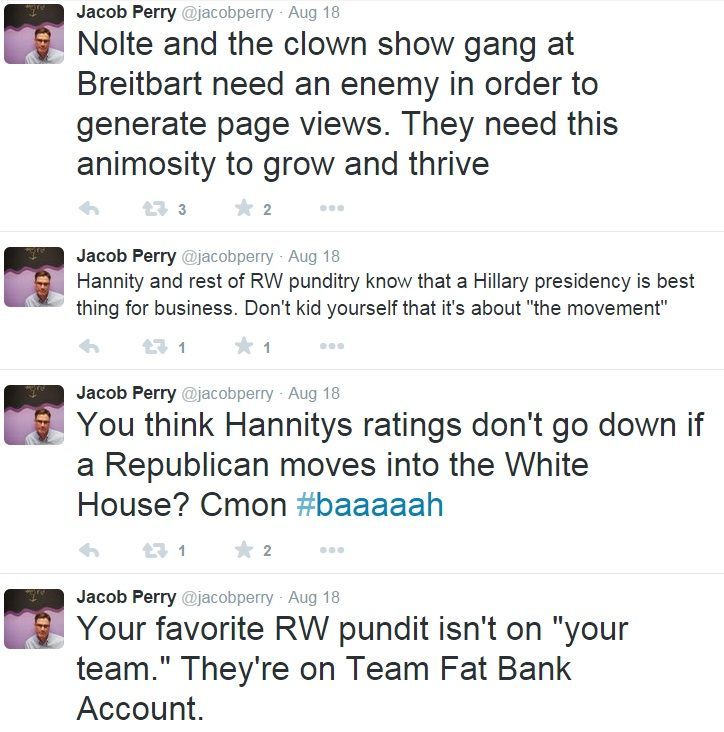 Who knows who is paying the Consultant Class to attack and marginalize our own voters.

Who knows whose business the Consultant Class is trying to attract by marginalizing our own voters.

All I know is that no one benefits by this more than Hillary Clinton and the Democrats.