This past weekend demonstrated how pro-life conservatives are capable of organizing and uniting themselves to make a political statement.

Saturday morning, August 22, I attended a pro-life rally held outside the Phoenix, Arizona Planned Parenthood offices. The organizers had obtained the necessary permits to have the street adjacent to the Planned Parenthood offices closed to traffic. They did all the other things they needed to do to have a successful protest: lined up great speakers (including pro-life public servants — including representatives to the U.S. House), had chilled water bottles on hand for everyone who had to deal with our 100 degree heat, had set up tables for literature, had set up a canopy so the speakers could stand in the shade, had a great sound system for the speakers, had security on hand, and had publicized the protest to get at least 500 pro-life supporters to attend.

Similar successful public protests were organized by pro-life conservatives in cities and neighborhoods all across the United States.

Bravo! Conservatives, obviously, can organize. And on short notice. In just a few days.

Similarly, other “single issue” conservatives have over the years since the election of President Obama organized public protests and rallies. The fiscal conservative, “taxed enough already” people spontaneously organized into “tea party” chapters across the country and have organized and united to hold successful mass rallies around the country.

But, what have these political statements and rallies accomplished in terms of changing the outcomes of primary elections?

How many incumbent Republicans have fallen to a conservative challenger in a primary election? One. Eric Cantor.  More, in a future article, on how that came to be.

Where do “single issue” conservatives need to go to organize and unite more effectively, politically, to achieve real political results?

Where should conservatives “rally” for real political action?

Easy:  They need to unite and organize for real political action “inside” the Republican Party.  And by “inside,” I mean by becoming “voting members” of the Party apparatus.

Easy to do. I wrote about it here. Had conservatives heeded this common-sense advice, they would now be running the Republican Party apparatus. And, therefore, be in the BEST political position possible to defeat incumbent “Republicans In Name Only” in the all-important, traditionally-very-low-turnout primary elections. The ONLY thing that will get the attention of an incumbent “Republican In Name Only” is to demonstrate that you have sufficiently organized and united politically to get out the vote (“GOTV”) for a challenger.

Did you know that less than one-half of one per cent of all Republicans are “in” the Party apparatus as voting members of it – as precinct committeemen? Why doesn’t the Republican National Committee tell you this?

The BEST way for “single issue” conservatives to organize and unite for changing the outcomes of the primary elections, AND changing the “leadership” of the Republican Party (which, like it or not, is the BEST political tool for defeating the Democrats/progressives/leftists), is by filling up the 200,000 vacant precinct committeeman (“PC”), or “voting member” slots, of the Republican Party. Because PCs elect, directly or indirectly, ALL of the Party officers (at the local district committee, county committee, state committee, and, yes, even the Republican National committee, level) and gain access to the GOTV software of the Party.

Again, the way for conservatives to gain control of the best political tool for defeating the Democrats/progressives/leftists, and the Republican “Campaign Conservatives” who run as conservatives but then act, after getting elected, as something else, is to take over the Republican Party apparatus by “invading” the “voting member” slots of the Party – the precinct committeeman slots.

This is not hard to do. The requirements for becoming a PC are not onerous. And the establishment Republicans in the officer ranks of the Party committees will not tell you about this.

Can you find out on the internet any evidence of the Republican National Committee Chairman Reince Priebus, or any other RNC member, encouraging Republicans to become precinct committeemen?

That is why I, a conservative, am telling you this. I need conservatives all across the country to unite and organize for real political action “inside” the best political tool to defeat the Democrats/progressives/leftists – the Republican Party – so that my children will not live under the monstrous political system of regimented socialism.

Here are some graphics that explain what conservatives must do as soon as possible to unite and organize politically for real political action “inside” . . . wait for it . . . a political party. 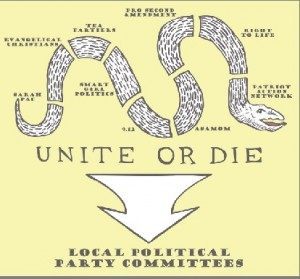 Unite and organize with all other conservatives “inside” the Republican Party and, thereby, MULTIPLY your political power.

The Republican Party is there for the taking: 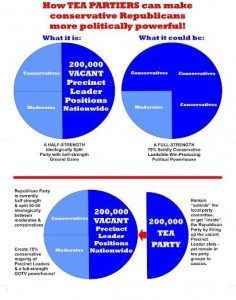 What the Republican Party “establishment” will never tell you: 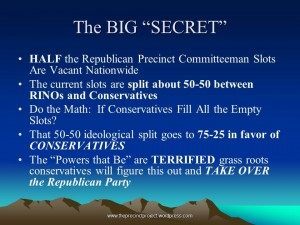 What conservatives united inside the Republican Party can DO: 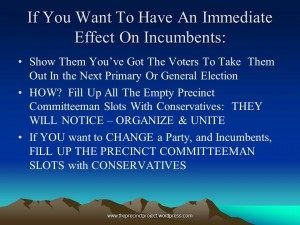 The Neighborhood Precinct Committeeman Strategy in a nutshell: 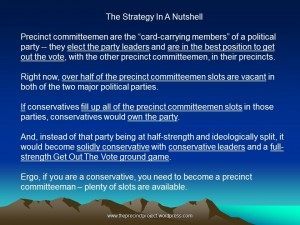 Unite and organize politically, conservatives, for real political action. To change the outcomes of elections. And the BEST way to do that is by uniting and organizing “inside” the Republican Party apparatus by filling up all of the vacant precinct committeeman slots. TOGETHER with other conservatives from other “single-issue” groups.

Again, and I cannot stress this enough, and the Party will not tell you this: Our Republican Party apparatus – the Party itself — is there for the taking. Because half of the precinct committeeman slots are vacant. Conservatives! Fill up all of these slots and you will OWN our Party.

I hope and pray YOU will do this.

You can do this. Because you are an American.

Please don’t wait for someone else to do this. They won’t. YOU need to do this.

Let’s save our country together.

Daniel J. Schultz graduated from the United States Military Academy in 1978 and served as an Army Human Intelligence Officer. He now practices law. He has been a Republican Party precinct committeeman since 2007 and was a co-winner of the Conservative HQ Liberty Prize. State-specific and other information relating to The Neighborhood Precinct Committeeman Strategy can be found at http://precinctproject.us and http://theprecinctproject.wordpress.com. He can be reached at acoldwarrior@gmail.com.