Jeet Heer is a senior editor at the New Republic. Tuesday afternoon, he jumped on a story published by Talking Points Memo (TPM) in which Jeb Bush is seen using the word “retarded.”

There’s just one problem: The word retarded is not only a slur, it’s a real word which means “to slow down.” And it turns out that’s exactly how Jeb Bush used it. In the video clip provided by American Bridge PAC, Bush says the following:

We should not have a multicultural society. We oughta have… America has done immigration so much better than the other countries because it’s a set of values that people share… that defines our national identity, not race or ethnicity or where you come from. And when you create pockets of isolation and in some cases, you know, the assimilation process has been retarded because it’s slowed down, it’s wrong. And it limits people’s aspirations.

So not only does Bush use the word correctly, as a description of the pace of assimilation, he clarifies he means “slowed down” immediately afterwards. At this point, Jeet Heer could take the opportunity to admit he was wrong. Instead, he offered a long lecture about why he was right to suspect Bush had bad intentions: 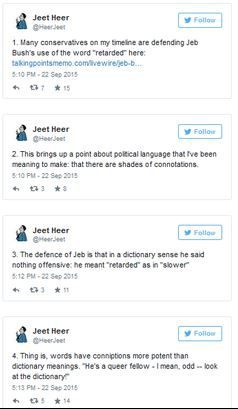 Words have conniptions? That’s news to me. I think you mean connotations.

He’s leery because it was a polemic, i.e. a rant? Actually, it wasn’t a rant at all. It was a calm, clearly reasoned answer to one woman’s question. Is it possible to disagree with his point? Of course, but that doesn’t make Bush’s language suspect. 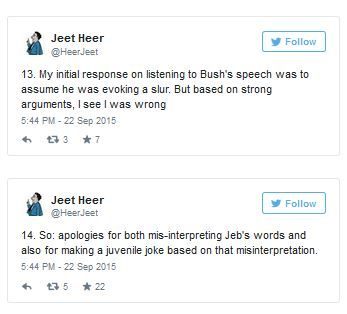 There we are. After a 35 minute discourse on the power of connotations, he finally apologizes. Please note in closing that Jeet Heer, and only Jeet Heer, used the connotation of “retarded” that he claimed Bush should not use.

As for Josh Marshall, he seems content to let the intentionally misleading TPM headline ride.