If they were, they might have thought twice before inviting notorious online abuser Randi Harper to a discussion on preventing online abuse, given that entering Harper’s name into their own search engine raises more red flags than a team of bullfighters running through a NASCAR event.

In fairness to Google Ideas, Harper has made an effort to cultivate an image as an online harassment guru. But her project to combat online nastiness, the “Online Abuse Prevention Initiative,” is irreparably tarnished by the abusiveness of its founder.

It’s also not clear what, if anything, the name represents beyond a WordPress page on the internet. The organisation appears to have no staff and no funding and is not registered with the authorities. To all intents and purposes it simply does not exist.

As Breitbart has previously reported, Harper is well-known for sending 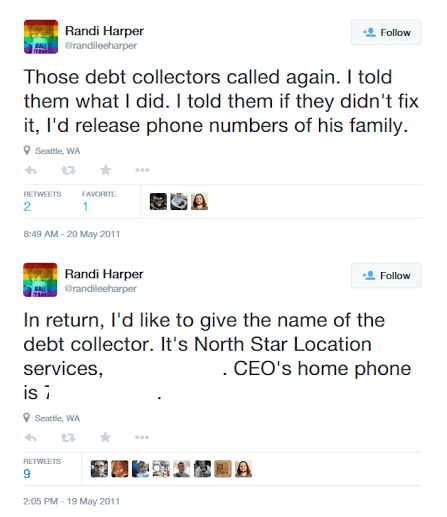 relentless mobs of abusers after her critics. Roberto Rosario, a Puerto Rican software developer and diversity activist, says he has been “harassed on the web daily” ever since he dared to criticise one of Harper’s Twitter blocking tools, the Good Game Autoblocker.

An anonymous Reddit user claiming to support Harper even posted his family’s personal details on the internet, warning him to stop speaking out against Harper’s projects. Harper, the “anti-abuse activist,” did nothing to stop this. Data scientist Chris Von Csefalvay endured repeated intimidation, including death threats against his wife, after Harper demonised him on social media.

Harper never intervenes to stop the abuse of critics on her behalf and often joins in. She personally led efforts to attack Vivek Wadhwa’s online reputation and frequently abuses her critics on social media, telling them to “get fucked” or “go die in a fire.” She also doxed a debt collector for the crime of doing his job.

Joining Harper is Zoe Quinn, a paragon of anti-harassment who bombarded The Fine Young Capitalists (TFYC,) a feminist games design project, with accusatory tweets for reasons that remain unclear. Soon after this incident, TFYC’s website was taken offline in an apparent DDoS attack. Quinn and her friends could be seen on Twitter joking about the DDoS as it happened.

Given that one of Google Ideas’ signature projects is a service to protect websites from DDoS attacks, the branding mismatch couldn’t be more delicious. Their selection of speakers is eerily similar to the UN’s equally-hilarious decision to invite Quinn to address them (read: a largely empty room) on “Cyber Violence Against Women and Girls.”

Another member of the “anti-harassment” discussion is Rose Eveleth, the Atlantic journalist who helped trigger the online public shaming of Rosetta Mission scientist Dr. Matt Taylor in 2014. The vitriolic campaign, started absurdly because of Taylor’s allegedly offensive shirt, eventually caused the scientist to break down in tears on live television. But it’s OK — he was being harassed for social justice.

Google Ideas is a PR exercise, designed to make Google seem socially-conscious and engaged with the world’s problems. Visit its website and you’re quickly met with messages about how they’re going to defend free speech, help investigate corruption, and generally save the world. It’s a distraction from Google’s less utopian purpose, which is the harvesting of data and the sale of online ads.

And, of course, there’s always the possibility that this is Google’s way of throwing a bone to the social justice crowd, giving them a photo op so they don’t have to actually do anything. But the messages it sends about Google’s priorities aren’t good.

Google gave up “Don’t be evil” long ago. Might be time to replace it with: “Don’t pose for a photo op with blue-haired, Patreon-supported, habitually abusive hipster evil.” I know they say poachers make the best gamekeepers, but this is ridiculous.