LAS VEGAS – Bernie Sanders’ most ardent supporters at Tuesday night’s Democratic presidential debate carried cardboard cutouts of Bernie Sanders portrayed as ‘Robin Hood,’ a medieval vigilante who stole from the rich and gave to the poor.

The pro-Sanders viewing room at the Wynn Hotel was packed with union nurses from National Nurses United and members of other groups, including the Robin Hood Tax organization.

Some Sanders supporters carried around cardboard cutouts of Sanders depicted as Robin Hood. Some others, including a young man and a young woman, dressed in costume as Robin Hood.

Slogans on signs in the room included “For Medicare For All” and pre-debate chants included “There’s no debate, Bernie’s great great great.”

Two young male Sanders supporters stood in a hallway at the Wynn near the media room asking passing journalists if they could borrow their credentials. 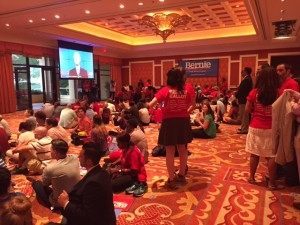