Editor’s Note: This Op-Ed was written and submitted to Breitbart Texas by Vance Ginn, Ph.D. and Nozim Ishankulov with the Texas Public Policy Foundation.

The Texas economy has taken hits from a plunge in oil prices, global economic weakness, and a stronger U.S. dollar during the last year. One indication of this combined blow is the latest report by the Dallas Federal Reserve showing a 7.7 percent drop in exports during the last year through July. With exports contributing to almost one-fifth of the state’s total economy and supporting more than one million jobs, it’s no shock that the state’s economy is slowing.

Fortunately, Texas’ high level of economic diversification of export goods to a concentrated group of destination countries has contributed to a more resilient economy. An economy that though weaker as of late will likely soon catch a second wind with the historic 25 percent cut in the business margin tax that takes effect in January and potentially the end of the federal oil export ban.

Texas not only ranks third nationwide for the most new foreign direct investment projects, behind California and New York, from 2009 to 2013, but Texas has led the nation in total exports since 2002. Thanks to these exports, dominated by oil-related products, they supported more than 1.1 million Texas jobs in 2014, which are about 10 percent of all U.S. export-related jobs.

Though there are benefits to increased international trade, there could be disadvantages from sensitivity to global economic fluctuations as a state may lack diversification in the production and destinations of exports.

Recent research at the Dallas Federal Reserve examines the Herfindahl index—a commonly used measure that indicates the level of concentration for products exported and export locations. According to the index, Texas ranks 18th in terms of being the most diversified of products exported (see Figure 1). 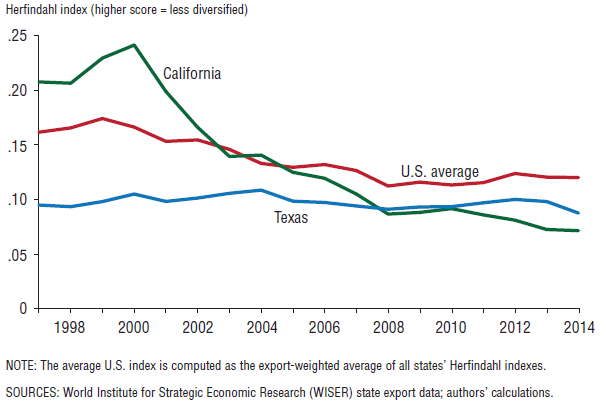 As Texas has diversified since the 1980s away from primarily oil and gas activity, Texas’ three largest products exported remain petroleum, coal, and chemical products of 36 percent with computers and electronics at 16 percent—Texas has been the top exporting state of technology goods since 2012.

Though a driver of Texas’ economic activity, oil prices do not play the same primary role that they once did. The sharp drop in oil prices during the last year has not yet caused a substantial economic downturn like it did during the 1980s when the mining industry’s share of the private economy was more than 20 percent. Today, that share is closer to 15 percent as the economy is more diversified, particularly in exporting goods, helping to weather the current downturn relatively well so far.

Measuring the concentration of export destinations, the Herfindahl index ranks Texas 37th as the state’s exports are highly concentrated to a few countries relative to other states and the U.S. average. Mexico, Canada, and Brazil comprise 51 percent of exports in 2014.

Figure 2: Texas exports are concentrated to fewer destinations than the U.S. average and California. 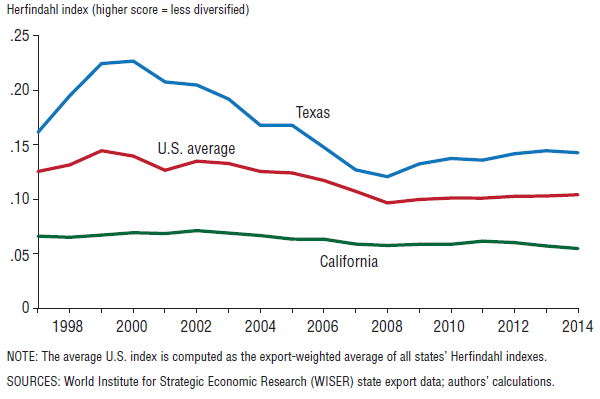 Though it’s a risk to have deep economic links with few countries, which is like putting all of your eggs in one basket, Texas’ economy has improved by exporting those goods that they produce most efficiently—the economic lesson of comparative advantage.

Texas legislators should raise the state’s edge in the laboratory of competition called federalism by repealing the state’s onerous business margin tax and ending needless regulations so that all Texans have the best opportunity to fulfill their hopes and dreams.

In addition to the $2.6 billion cut in the margin tax, the discussion at the federal level to end the antiquated oil export ban, which was recently passed in key U.S. House and Senate committees, could greatly benefit Texas’ exports and economy. This is also important for the nation’s economy as Texas has been America’s jobs engine by creating more than half of all civilian jobs nationwide since the last recession started in December 2007.

At a time when exports are declining and the labor market is weakening, Texans’ future prosperity rests on having the weight of excessive government lifted. Though some argue the American dream is dead, it’s just moved to Texas. It’s important to keep that dream alive.

Vance Ginn, Ph.D., is an Economist in the Center for Fiscal Policy at the Texas Public Policy Foundation, a non-profit, free-market research institute based in Austin. He may be reached at vginn@texaspolicy.com.

Nozim Ishankulov is a Research Associate in the Center for Fiscal Policy at the Texas Public Policy Foundation.