A senior finance staffer for former Florida Gov. Jeb Bush’s campaign, who also runs a firm that has received payments from the pro-Bush Super PAC Right to Rise USA, may have been paid more than a million dollars so far in 2015, either directly or through companies she owns or has an ownership interest in, off of Jeb’s effort to become the third member of the Bush family elected president of the United States.

This extraordinary level of payments made to one staffer, Bush campaign finance director Heather Larrison, and companies she owns or may have an ownership interest in, could provide a significant hint to explain why the Bush campaign continues to struggle, both financially and in the polls.

The Bush family—including Jeb, former President George W. Bush, former President George H.W. Bush, and former First Lady Barbara Bush—is huddling in Houston for an emergency family meeting this weekend with major campaign donors, as Breitbart News previously reported. That meeting comes as a cash-strapped Bush campaign has told all its staff it is implementing across-the-board pay cuts and downsizing the operation, all while Bush struggles lagging in the polls.

Breitbart News has not been able to confirm whether Larrison has an ownership interest in LKJ LLC, but LKJ LLC shares a Washington, D.C. PO Box with The Larrison Group, a firm that is run by Larrison.

If Larrison also has an ownership interest in LKJ LLC, it would appear that she is triple-dipping off of the Jeb Bush presidential aspirations.

The Jeb Bush campaign paid LKJ LLC over $534,000 in fees and expense reimbursements for “finance consulting” and “fundraising consulting” during the two months of July and August, recent FEC filings reveal.

Of these payments, more than $402,000 were strictly for “financial consulting” and “fundraising consulting” services, while more than $131,000 were for facility rental, catering, and airfare expenses.

During those same two months, Larrison was on the payroll of the Jeb Bush campaign. She was paid a salary of $31,516 for her services as the campaign’s finance director.

All told, payments made by the Bush campaign to Heather Larrison and LKJ LLC during the 3rd quarter of 2015 were more than $579,000.

Larrison also benefitted financially–through the Larrison Group–from payments made by Right to Rise USA, the Super PAC Jeb Bush started before he announced his campaign for president. That Super PAC is run by GOP consultant Mike Murphy.

The Larrison Group, which lists Larrison as its president, was paid more than $143,000 by Right to Rise USA during the first two quarters of 2015 for finance consulting, travel, furniture lease, and rent, according to FEC filings.

LKJ LLC, in which the possibility of Ms. Larrison’s ownership interest is unconfirmed despite the shared PO Box address with the Larrison Group, was paid more than $617,000 by Right to Rise USA during the first two quarters of 2015 for finance consulting, also according to FEC filings.

Total combined payments to Heather Larrison, the Larrison Group, and LKJ LLC during 2015 from the Jeb Bush campaign and the Right to Rise USA SuperPac are more than $1.3 million.

According to federal campaign law, SuperPACs associated with candidates are prohibited from coordinating campaign messaging with the candidate’s campaign. In some cases with various fundraising personnel, federal law allows people to support both the campaign and a Super PAC for a candidate as long as the efforts are separated by strict firewalls and various legal restrictions are followed.

The Bush campaign has not yet respond to the following set of questions from Breitbart News:

1. Can you confirm or deny that Heather Larrison is a part owner in LKJ LLC?

2. If Heather Larrison is a part owner of LKJ LLC, does this constitute a conflict of interest or an attempt by the campaign to pay her more without revealing that fact directly?

While the arrangement between Larrison, The Larrison Group, LKJ LLC, the Jeb Bush campaign, and the Right to Rise USA SuperPAC may be legal, it is hard to imagine that the Bush campaign team will not have to offer a lucid explanation for this arrangement at this weekend’s emergency meeting in Houston. 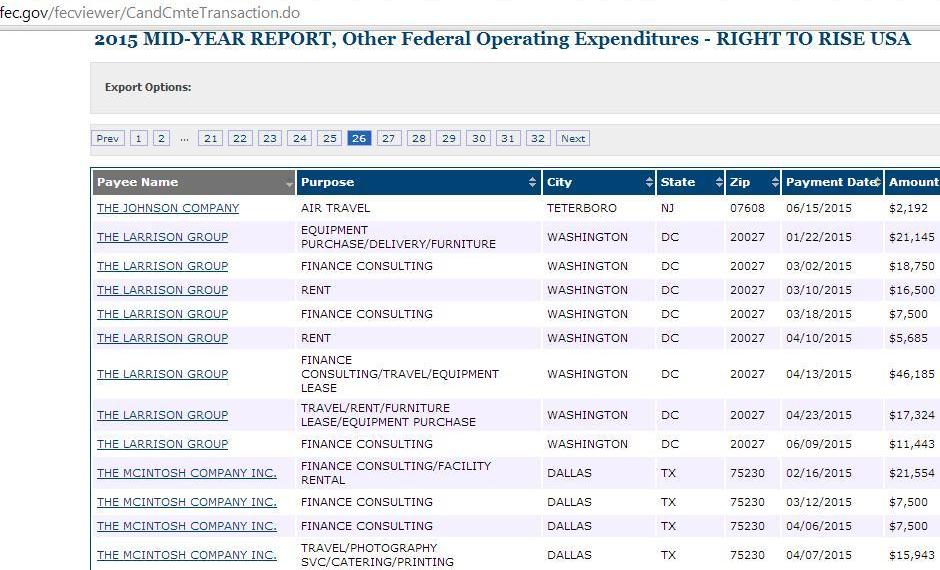 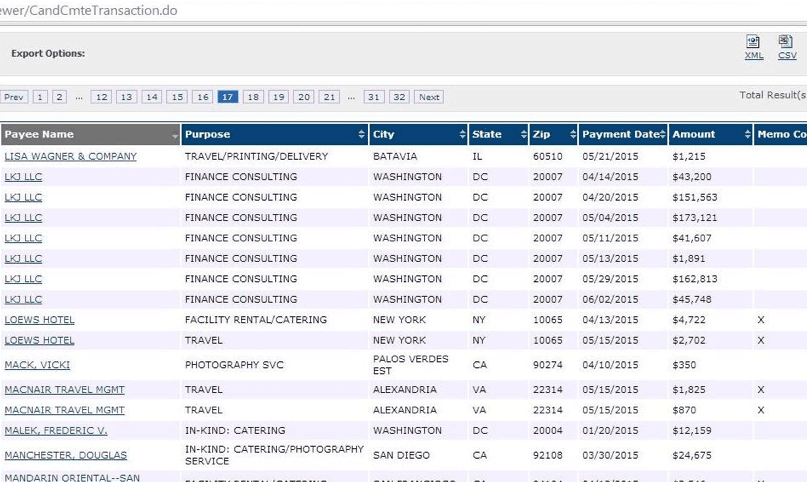 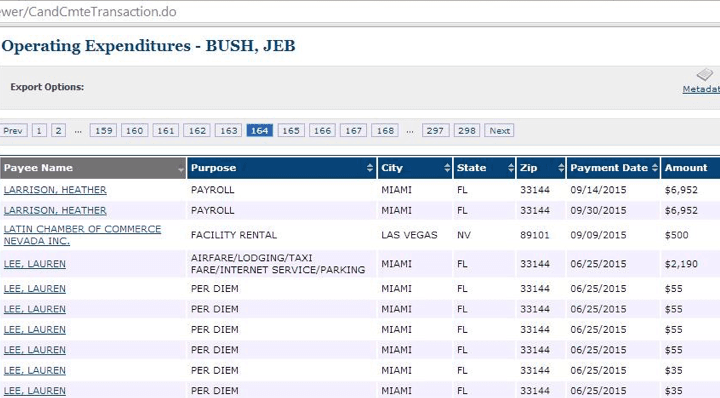 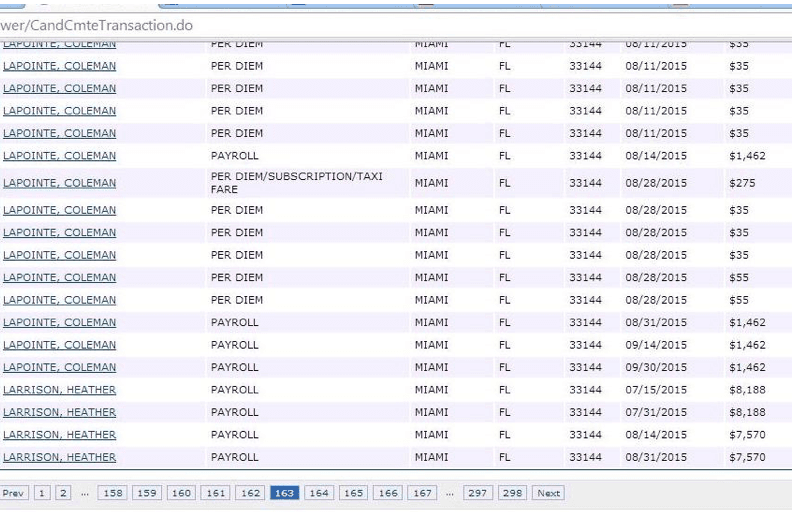 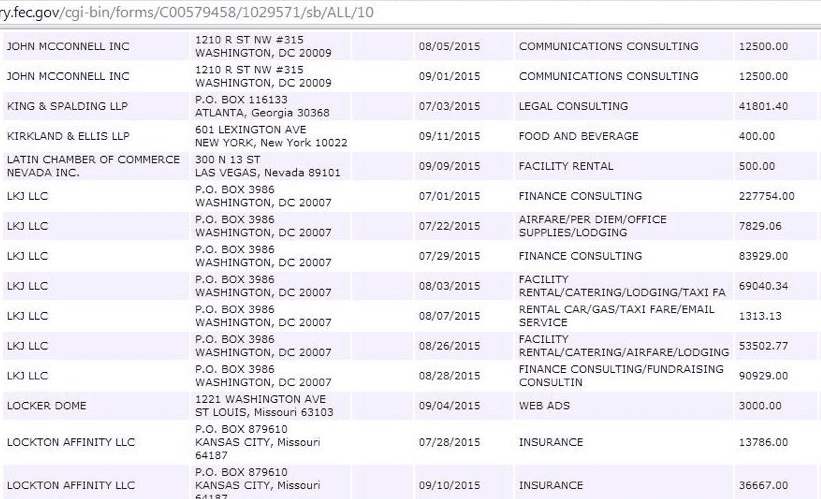