President Barack Obama’s Department of Veterans Affairs has banned employees at its facility in Salem, Virginia, from saying “Merry Christmas” to veterans.

It started as a broader ban that included Christmas trees. Federal law recognizes Christmas as an official federal holiday (5 U.S.C. § 6103) and provides federal employees with a paid day off to celebrate the Christian belief in the virgin birth of Jesus Christ.

Every year, a White House Christmas Tree and a Capitol Christmas Tree grace those two respective buildings in Washington D.C., and a National Christmas Tree is also officially lighted outdoors for the public to enjoy during that time of year.

Yet the “Executive Leadership Team” at the Salem VA Medical Center banned Christmas trees, as well as other Christian speech and celebrations. As reported by local media, an email sent by senior staff to the center’s employees reads in part:

…Public areas may only be decorated in a manner that is celebratory of the winter season. Displays must not promote any religion. Please note that trees (regardless of the types of ornaments used) have been deemed to promote the Christian religion and will not be permitted in any public areas this year.

Just hours ago, pressure from the center’s employees caused the management team to cave on the Christmas tree ban. Christmas trees are back in at the facility.

However, the email goes on to say that private religious expressions can only be uttered in “personal work areas.” That means employees can only speak freely in places where the public usually cannot enter and, even then, only if the recipient would clearly understand that the speaker is speaking in his personal capacity only.

In other words, an employee could be punished for wishing “Merry Christmas” to a veteran in the lobby or any other public area.

Even when those stringent curbs are obeyed, the email directive adds that private religious speech can still be banned if managers decide such speech “interfere[s] with carrying out official duties and responsibilities,” threatening penalties against people who offer religious greetings even behind closed doors.

The email also bars Christmas music, saying that if a supervisor has allowed an employee to have music in his workspace, such music must “be secular (non-religious).”

This Obama administration VA’s directive is inconsistent with controlling precedent from the U.S. Supreme Court. In the 1989 Allegheny case, the court narrowly (5-4) adopted the “endorsement test,” holding that government action violates the Establishment Clause when a reasonable observer would think the government is endorsing religion.

Yet even in that case—which many legal scholars consider hostile to religious faith—the court, by a 6-3 vote, held that the display of Christmas trees does not endorse any religion.

“The Christmas tree, unlike the menorah, is not itself a religious symbol. Although Christmas trees once carried religious connotations, today they typify the secular celebration of Christmas,” wrote Justice Harry Blackmun, upholding the government’s displaying a 40-foot Christmas tree on public land outside a courthouse.

“Numerous Americans place Christmas trees in their homes without subscribing to Christian religious beliefs, and when the city’s tree stands along in front of the City-County building, it is not considered an endorsement of Christian faith,” he added.

The message from the center’s top leaders says that VA employees who need further guidance about the removal of religious symbols should “contact the Chaplain Service at ext. 2165.”

“At a time when our VA should be doing everything it can to honor our veterans, it instead denigrates them and their service,” said Michael Berry, senior counsel with Liberty Institute, the largest law firm in the United States that litigates exclusively religious liberty cases.

“Any VA employee—whether they work at the Salem VA Center or elsewhere—who feels that their free-speech or religious-liberty rights are being violated, they should contact us immediately,” he told Breitbart News. The firm’s website is www.libertyinstitute.org. 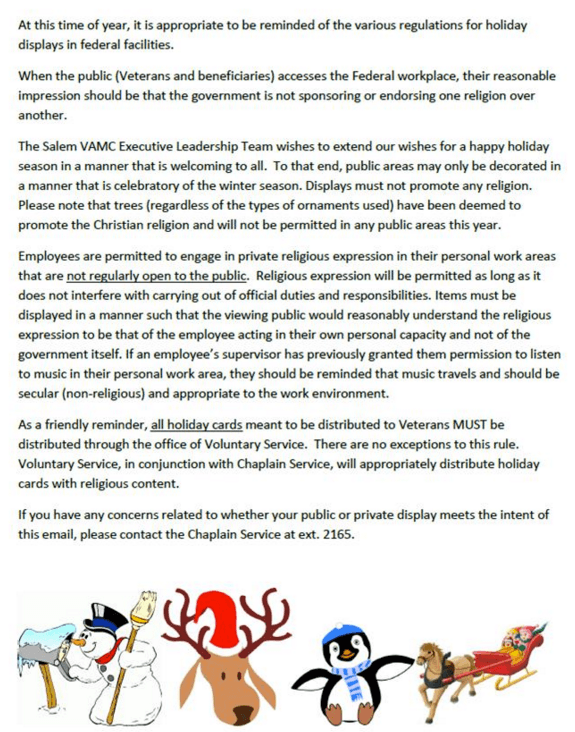