The U.S. Business and Industry Council (USBIC) is launching a print ad series in several media outlets around Capitol Hill to “highlight the lack of enforceable currency provisions in the Trans Pacific Partnership (TPP)” trade deal between the United States and 11 other countries.

We want to remind Congress that President Obama completely ignored their request for strong, enforceable currency measures in the TPP. Bipartisan majorities of both houses have consistently demanded action on currency cheating. Clear negotiating instructions on currency were included in the Trade Promotion Authority legislation. However, the president chose to frustrate the will of Congress by relegating currency cheating to a TPP side letter that contains no enforceable provisions and instead calls for more meaningless chit-chat diplomacy on the issue. Congress now has the chance to show that it meant what it said about currency cheating in a recorded vote by rejecting the TPP.

The ads highlight that the TPP is 5,544 pages, but lacks “even a single sentence containing effective currency measures,” according to the USBIC press release. The ad also asks Congress to explain why they vote for this “job-destroying deal.” 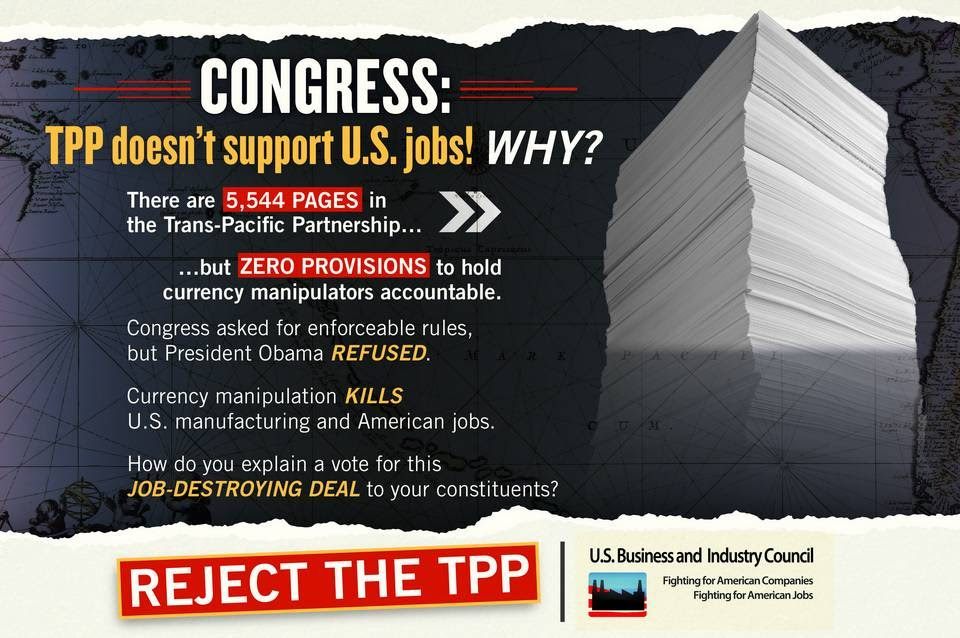 Previously, 230 U.S. House representatives wrote a letter to President Obama saying, “Undervalued exchange rates allow other countries to boost exports of their products and to impede exports of ours.”

The letter urged the inclusion of ‘currency disciplines’ that would ‘bolster our ongoing efforts to respond to these trade-distorting policies.’ In September 2013, 60 Senators signed a similar letter calling for ‘strong and enforceable foreign currency manipulation disciplines.’ The Members of Congress followed up their letters by calling for enforceable currency provisions in the negotiating instructions contained in June 2015 Trade Promotion Authority legislation.

“If Congress could agree so unequivocally on the necessity for including enforceable currency measures, then they know instinctively that the TPP, which doesn’t contain even one, is a raw deal for America,” Kearns stated. “Voters understand this point well, and they’ll be watching to see how their Members handle this crucial test.”