Irish bookmaker Paddy Power has launched a controversial new advertisement, as seen on the Guido Fawkes blog site in Britain. The image – which tempts users into a link to bet on U.S. Vice President Joe Biden entering the Democrat race – shows a “blacked up” President Barack Obama, as well as an “oranged up” Donald Trump.

The advert (above) reads “Orange is the New Black” – a sleight at Donald Trump and Joe Biden’s perma-tans – and President Obama’s being thought of as the “first black president”.

The advert links back to Paddy Power’s website, which reads: “Biden his time? How Joe is back in the race for the Democratic nomination (but Paddy Power could get tanked by Trump)”.

The bookmaker is no stranger to controversial adverts, having launched broadsides against Liverpool Football club, illegal immigrants, police brutality, Arab football club owners, and many more.

The most bizarre thing about this new set of ads is the fact that Paddy Power made President Obama darker. 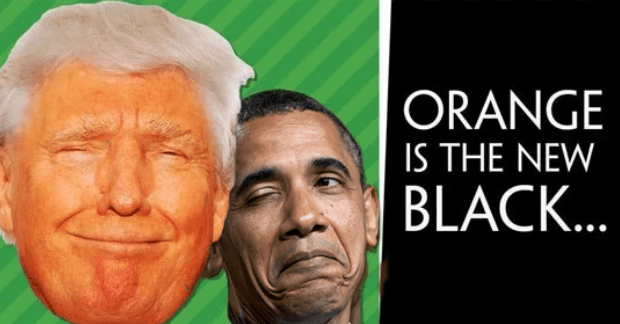 How the ad would look WITHOUT Mr. Obama being darkened

A source at the Guido Fawkes blog said: “Please contact our advertising provider with any questions.”

Paddy Power, which is based in Dublin, recently upgraded its forecast for pre-tax earnings of around £136.9 million for 2015, a rise of £12.3 million on the previous year.

The company’s forthcoming merger with rival BetFair is set to make it one of the world’s biggest betting firms.