Dr. Ben Carson slammed Sen. Ted Cruz (R-TX) on Thursday for sending messages to his campaign volunteers before and during the Iowa caucuses, erroneously informing them that Carson intended to drop out of the race and that they should urge voters to switch to Cruz.

In addition, Breitbart News’ Alex Swoyer reported Thursday that the Cruz campaign also made phone calls to activists in Iowa, telling them to inform Iowa caucus voters that Carson had dropped out of the race and they should support Cruz instead.

Cruz apologized to Carson on Tuesday, and has since tried to explain what he calls a “mistake,” as CNN reported:

“Last night when our political team saw the CNN post saying Dr. Carson was not carrying on to New Hampshire and South Carolina, our campaign updated the grassroots leaders just as we would with any breaking news story. That’s fair game,” Cruz said in a statement. “What the team should have done is send around the follow-up statement from the Carson campaign clarifying that he was indeed staying in the race when that came out. That was a mistake from our end, and for that I apologize to Dr. Carson.”

In fact, the Cruz campaign’s messages to activists were sent after the Carson campaign had already clarified that Carson was not dropping out.

However, it is not clear that the messages affected the final result: Carson actually out-performed his poll average by 1.6%.

The following is a definitive timeline of events on Monday night. All times are local Iowa time–i.e. Central Standard Time (CST).

Ben Carson will likely speak at his victory party in Iowa before caucus results are in so he can catch a flight.

Carson won’t go to NH/SC, but instead will head home to Florida for some R&R. He’ll be in DC Thursday for the National Prayer Breakfast.

Ben Carson’s campaign tells me he plans to stay in the race beyond Iowa no matter what the results are tonight.

CNN’s political team, citing Moody, reported that Carson was leaving Iowa “to go back to Florida” to “rest for a few days,”and then to attend the National Prayer Breakfast in Washington, D.C. on Thursday. They did not say that Carson would be suspending his campaign, or that he would be making a “big announcement.” They did call Carson’s travel plans “very unusual” and “very significant news.” The transcript follows below:

Tapper: Thanks, Wolf. Well, CNN has learned some news about the man who, at least according to polls, is in fourth place here in Iowa. Now, Dana, a week from tomorrow, we’re all going to be doing this again for the New Hampshire primary. So almost every single candidate is going to be going directly from here to New Hampshire to campaign–except for the man in fourth place, who a few months ago was in first place here, Dr. Ben Carson. What have we learned?

Bash: That’s right. We should say that our Chris Moody is breaking this news, that Ben Carson is going to go back to Florida, to his home, regardless of how he does tonight here in Iowa. He’s going to go there for several days. And then afterwards, he’s not going to go to South Carolina. He’s not going to go to New Hampshire. He’s going to come to Washington, D.C., and he’s going to do that because the National Prayer Breakfast is on Thursday. And people who have been following Ben Carson’s career know that that’s really where he got himself on the political map, attending that prayer breakfast, and really giving it to President Obama at the time. And he became kind of a hero among conservatives, among evangelicals especially.

Tapper: –to be announcing that you’re going to go home to rest for a few days, not going on to the next site. Plus, he’s already announced that he’s going to be coming out and speaking at 9:15 local and 10:15 Eastern, no matter whether or not we know the results, because he wants to get home and get ahead of the storm.

Bash: Look, if you want to be President of the United States, you don’t go home to Florida. I mean, that’s bottom line. That’s the end of the story. If you want to signal to your supporters that you want it, that you’re hungry for it, that you want them to get out and and campaign, you’ve got to be out there doing it too. And he’s not doing it. it’s very unusual.

Tapper: Very unusual news that CNN has just learned. CNN’s Chris Moody breaking the story. Wolf, back to you in Washington.

6:53 Carson campaign responds to CNN and clarifies that Carson is not “standing down”

Carson spokesperson Jason Osborne tweeted that Carson was not suspending his campaign:

.@RealBenCarson will be going to Florida to get fresh clothes b4 heading back out on the campaign trail. Not standing down.

Despite Osborne’s clarification, the Cruz campaign sent an email to volunteers, under the Cruz logo, “sharing accurate information about Carson taking time off the campaign trail.”

The email indirectly referenced the CNN report and claimed Carson would be “making a big announcement next week.” 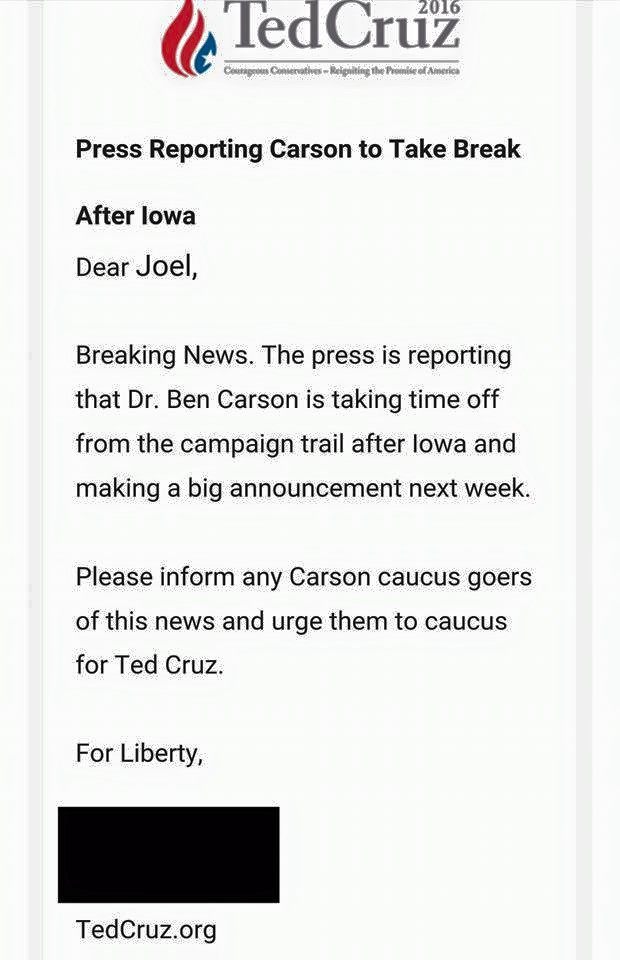 “[T]he reports said he was going to DC–we know now that is for the National Prayer Breakfast,” a campaign spokesperson told Breitbart News on Wednesday evening, via e-mail.

However, the CNN report never mentioned a “big announcement,” and explicitly mentioned the National Prayer Breakfast–this Thursday, not next week.

7:01 More messages from Cruz campaign to supporters that Carson is dropping out

The Cruz campaign reportedly sent text messages to supporters as the Iowa caucuses began, informing them that CNN had reported Carson “will stop campaigning after Iowa” and urging them to tell Carson supporters to back Ted Cruz.

The smart message the @tedcruz campaign just sent their most committed backers in #Iowa: pic.twitter.com/Zb93zjMtB3

7:05 Jason Osborne clarifies again that Carson is not suspending his campaign

Carson spokesperson Jason Osborne tweeted again that Carson was not suspending his campaign:

.@RealBenCarson leaving Des Moines later tonight to avoid storm. Not suspending — getting fresh clothes then back out Wednesday

Osborne would continue clarifying throughout the evening.

A precinct captain in Iowa received a voice mail from the Cruz campaign, obtained by Breitbart News. The call came from a Galveston, TX number and the message was left at 7:07 p.m.:

7:08 CNN tweets that Carson “plans to take a break from campaigning”

The report was erroneous, and contradicted by Moody’s reporting and Carson’s clarifications. However, it came after the first Cruz messages had been sent and phone calls made.

Rep. Steve King (R-IA), who campaigned with Cruz, tweeted that voters “need to know” that Carson “looks like he is out,” referring to one of Moody’s earlier tweets:

#iacaucus Skipping NH & SC is the equivalent of suspending. Too bad this information won’t get to all caucus goers. https://t.co/lW5Js50EMA

Carson looks like he is out. Iowans need to know before they vote. Most will go to Cruz, I hope. https://t.co/lW5Js50EMA

The Cruz campaign left a second voicemail with the same Iowa precinct captain at 7:29 p.m.–this time from an Iowa phone number that Breitbart News traced back to a Cruz campaign volunteer hotline.

Hello, this is the Cruz campaign with breaking news: Dr. Ben Carson will be [garbled] suspending campaigning following tonight’s caucuses. Please inform any Carson caucus goers of this news and urge them to caucus for Ted instead. Thank you. Goodnight.

The tweet was later deleted, but was captured by Jennifer Burke of Politistick, writing from the Mountain time zone (hence the time stamp is one hour earlier).

On Wednesday, talk radio host Rush Limbaugh speculated, based on Close’s tweet, that the Rubio campaign had been “pushing the narrative hard that Carson is dropping out.”

Close later deleted the tweet, saying he had drawn his information from Twitter, not first-hand. Rubio himself has denied any involvement by his campaign.

Moody followed with a fourth, explanatory tweet, explaining that Carson was not dropping out:

Folks, Ben Carson is just making a brief stop at home in FL tonight and campaign says he’ll be back on the campaign trail by Wednesday.

The Cruz campaign later referenced this tweet as the first clarification it noticed.

CNN issued a statement Wednesday evening disputing Cruz’s claims to have relied on its reporting: “Senator Cruz’s claims about CNN are false. At no point did the network indicate Dr. Carson would suspend his campaign.”

Also on Wednesday evening, Cruz communications director Rick Tyler told Fox News’ Sean Hannity that the campaign had based its email on a “legitimate news story” that had been confirmed by later events.

Tyler added that “we never said or speculated, nor did CNN, that he was dropping out.” He allowed that it was possible “there might have been someone in our campaign who would have speculated that [Carson] was going to drop out,” for which Cruz had apologized.

Fox News contributor Karl Rove argued on Wednesday evening that the inaccurate information, sent to Cruz supporters at caucuses throughout Iowa, could have caused rival Donald Trump to lose by switching thousands of votes from Carson to Cruz.

Trump, who came second to Cruz in Iowa, tweeted on Wednesday morning that Cruz had won by “fraud” and called for the Iowa caucuses to be held again.

This was sent out from Ted Cruz- as Iowans arrived at their caucus sites to vote. #CruzFraud pic.twitter.com/tRM7KUCrSU

Iowa Gov. Terry Branstad (R), who opposed Cruz openly during the race, said Thursday that Cruz’s tactics had been “unethical and unfair.”

Also on Thursday, Carson said that the Cruz campaign never tried to verify the truth before sending false information to supporters.

“As a Christian man, I accept the apology he has since offered and I take him at his word that he didn’t know,” Carson said. “But no actions have been taken to correct the problem. That I cannot accept.

“One thing is now clear — while Senator Cruz may preach against the ‘Washington Cartel,’ he will still adopt, or at least not condemn, Cartel tactics for his own political gain,” Carson wrote.

On Thursday, the Washington Post reported that Carson would be cutting campaign staff by 50 posts, some 40% of personnel.

The campaigns will likely continue to debate whether the controversy reflects a good-faith error, hardball tactics, or something more.