MANCHESTER, N.H. – Donald Trump took the stage to a massive ovation at the Verizon Wireless Arena, the crowd near capacity in the 14,000-seat venue despite a blistering snowstorm the night before the all-important New Hampshire primary.

The frontrunner railed against lobbyists and donors and the system that rewards them, pledged to close the border and repair the military, laid out his most comprehensive plan for a new American health care system, and made the crowd believe that perhaps — here in “crunch time” — this whole episode might soon just end with a White House win.

Before Trump entered to the Beatles’ “Revolution,” the show was already underway. In the hallway, concession stands doled out hot dogs and pretzels. On the floor, people danced and a costumed Trump impersonator posed for the cameras. An announcer on the PA system, his voice of Old New York, told the fans not to intimidate any protesters. The First Amendment, in this venue, would be upheld. An ironic entrance video showed Fox News pundits bashing Trump as that most dreaded of creatures: a “populist.”

“You know there’s like seven accidents outside. I cannot believe it. It cannot be like this tomorrow but I think it’s going to be fine. It stops tonight at two o’clock we think. So nobody’s going to have any excuses,” Trump declared to applause. “We have a blizzard or at least a very bad storm, and to have this many people, I want to thank everybody…This is a lot of people.” 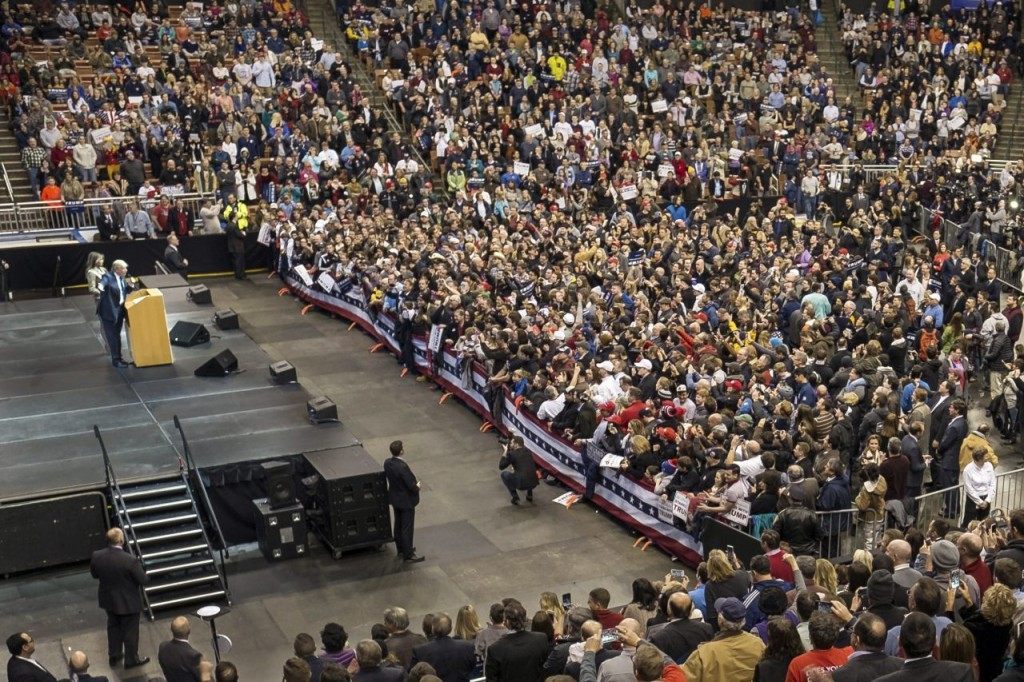 “This is a movement,” he said. “What we’re doing hasn’t been done before.”

His Republican opponents, and the special interests funding them, garnered joyous boos.

“I’m standing at the debate. I’m watching Marco sweating like a dog on my right…Honestly, Marco is having a hard time. And he’s a nice guy. He’s a nice guy,” Trump said before tearing into Rubio’s pre-scripted talking points. “After three times, I said, ‘Wait a minute, he said that about three minutes ago. Then I said, ‘Wait, wait, wait, he said that two minutes ago.’ The same exact thing! So after the fifth time I said, ‘What the hell’s going on over here?'”

Trump has turned the Republican primary into a reality show. It’s an effective tactic, one that resonates with a country weaned on the TV genre that he helped to create. The sweating, bumbling politicians have all become boardroom wannabes or castaways on an island where their flaws are exposed, picked apart, and analyzed. And they all come off dishonest compared to him. This is the politics of Richard Pryor as Montgomery Brewster and Peter Sellers as Chance the Gardener. This was never supposed to happen. But it did.

And scarier still for the suits trying so hard to shut it down: Trump has substance.

On the border: Build the wall to block the gangsters and their heroin shipments. “We have situations right now where we have the migration. And we’re accepting people in. And we’re accepting them in by the thousands…Look at New Hampshire, the problems you have with the drugs. We are letting people into this country and we have absolutely no idea who they are, where they come from, are they ISIS? Maybe, maybe not.”

On the military: He wants to strengthen the armed forces but cut waste out of the budget and re-focus it. “We’re buying equipment and we’re buying things that our generals don’t even want. We’re buying planes they don’t want instead of other ones because that company has better lobbyists…We’re going to get them the equipment they want. We’re going to save a lot of money.” He wants to build a military so strong we’ll never have to use it. After we take care of ISIS, that is. And no more nation-building experiments that de-stabilize the Middle East and embolden Iran. “Nobody, I’m telling you, nobody, is going to want to play with us.”

When Trump explains his views, it all sounds self-evident. It sounds like common sense. It wouldn’t sound so controversial if we didn’t live in a media climate controlled by globalist corporate interests. It’s the kind of politics — tough, protectionist, and nationally self-interested — that Trump has been thinking about for a very long time.

And now, like the last American tycoon, he’s the only one fighting for it.

After the speech, Trump and his family descended upon an upscale steakhouse, the finest in Manchester. He strolled in like the benevolent billionaire and left the same way. He talked strategy with this reporter and my dear friends at an all-reporter’s table. He introduced his sons and his wife and daughter. He was polite to a tee, a consummate gentleman, a class act. And even though I’d never seen Donald Trump eating well-done steak a shovel pass away from me, his presence didn’t interrupt the night. We — my dear beloved friends and I — became even louder, more joyful, more drunk, more happy to be with each other and alive in this weird and electric American moment. Trump simply decorated the room.

It’s hard to compare him to any other politician or historical figure, though Franklin Roosevelt comes to mind. But he’s instantly familiar. His name, his demeanor, his crazy brilliant quest to do the right thing and add a touch of Broadway magic to all of it just for the sake of style. He’s a man from a New York novel. He exists in the collective unconscious.

And so maybe, when he talks about himself in the third person, as he tends to do (“We won’t lose with Trump”), he’s not referring just to himself. Maybe he’s not just talking about his own 69-year old six-foot-two frame.

Maybe he’s talking about a movement.