MANCHESTER, New Hampshire — Billionaire businessman Donald Trump, the runaway winner of the first in the nation GOP presidential primary, picked the right song to celebrate with.

When Trump, who was making his closing pitch to Granite State voters at the Verizon Wireless Arena, came on stage to a room with a crowd of more than 4,000 on Monday night—as concessions like pretzels, popcorn, and soda were sold to rally attendees as if it were a professional sports game—he took the stage while speakers blared “Revolution” from The Beatles.

When he left the stage, he played it again. And when Trump came on and left the stage while giving his victory speech on Tuesday evening after winning the primary election, the song was once again playing.

That’s what Trump has promised throughout his campaign: a pledge to change the world and a political revolution in America. And on Tuesday in New Hampshire, voters rallied in astonishingly high numbers behind him. Not only did Trump exceed the number of voters even the most generous polls had projected he’d win by, he more than doubled his closest opponent.

According to Fox News totals, with 92 percent of New Hampshire precincts reporting around 4:30 a.m. on Wednesday, Trump has received 92,417 votes. Ohio Gov. John Kasich, his closest rival, pales in comparison with just 41,813 votes. Kasich’s total is less than half of Trump’s 35 percent of the electorate. All the networks projected Trump’s victory once the polls closed.

While it’s not final yet with regards to counts on either side, at this time Trump’s more than 50,000 vote margin of victory in a divided field over his next best competitor is even better than that of the blowout victory on the other side of the aisle, where Sen. Bernie Sanders of Vermont beat former Secretary of State Hillary Clinton by just under 50,000 votes. On the Democratic side, there weren’t multiple other candidates to compete against, which makes Trump winning by that amount over not just Kasich but everyone else all the more impressive.

What’s more, right behind Kasich in third place is Sen. Ted Cruz (R-TX)—a firebrand conservative nobody ever thought could finish in New Hampshire ahead of not just former Florida Gov. Jeb Bush but also Sen. Marco Rubio (R-FL) and New Jersey Gov. Chris Christie—with 30,416 votes at 12 percent. Bush’s 11 percent and 29,186 votes has him in fourth, a little over a thousand votes ahead of Rubio—who also got 11 percent with 27,774 votes.

While the political establishment—and especially the Fox News commentariat—still are talking up the chances of Rubio emerging from this horde of divided establishment candidates, it’s Trump who really has shocked everyone: he cut deeply into establishment control over many voters. Exit polling shows he dominated party-wide, and GOP insiders told Breitbart News throughout the evening they are amazed at Trump’s ability to win in areas throughout New Hampshire where conservatives and anti-establishment candidates never before stood a chance.

If Trump repeats this success nationwide, he could become entirely unstoppable—if he isn’t already. What’s more, the insiders say, Trump did it all without a sophisticated ground game—at least not one as organized as ones from the many other candidates who spent far more money and time in New Hampshire.

Exit polling showed voters over and over again, on every single major issue ranging from radical Islam to immigration to the economy and more, trusted Trump more than anyone else to handle it. Half of GOP voters are furious with the failures not just of outgoing Democratic President Barack Obama but the Republicans who have enabled him for years.

Trump has been a master this election cycle of manipulating news cycles to his advantage. For instance, on Tuesday evening as Bush—who Trump still clearly views as more of a threat to his electoral chances than anyone else, including Rubio—came out to deliver his post-election speech here, Trump came out on stage seconds later. The move forced news networks to drop Bush’s speech and cut instead to Trump’s, squeezing Bush out of precious air time when voters in soon-to-vote states are watching most closely. The move was—as it’s hard to believe anything Trump does is an accident—brilliant.

But it’s not just the media manipulation that Trump has mastered. It’s second nature to Trump, who worked in reality television in addition to building his real estate empire and massive fortune, to capture the emotion and strike the right tone for his target audience. Trump’s deep understanding of media and show business allows him to convey an extraordinarily personal message to voters—something they’ve been dying to hear from somebody as they crave leadership from anybody—that matches the raw emotion of the electorate.

The best in television and radio, they say, have a personal relationship with their viewers and their listeners. They know them, what they like to talk about, and how they think. It’s as if the host is sitting there in the living room of the audience member during the show–and if that media personality is part of the family. Trump operates very much the same way, and people feel like they know him personally because of the way he communicates directly with them.

Trump’s policy positions are the core of his campaign. Most importantly, he’s promising to stop the madness when it comes to immigration. Voters also believe he will actually listen to them on trade, healthcare, and the economy. His core policy positions—nationalist populism, essentially—poll extraordinarily well across America.

But the other side of Trump, his celebrity, helps him permeate the American community through a media establishment determined to see him lose. His policy positions are popular not just among conservative Republicans, but also GOP-wide and even among many Democrats. All Trump has to do is make sure the voters understand where he stands on the issues. As such, Trump uses his celebrity—and his innate ability to draw attention to himself and away from others—as a tactic of sorts to emanate messages directly to Americans.

Those messages come in a variety of forms, ranging from tweets to speeches to carefully placed interviews to Instagram videos to rare advertisements to surrogate commentary. Trump’s top three surrogates are his children, Donald Trump, Jr., Ivanka Trump, and Eric Trump, but others who communicate for him include campaign manager Corey Lewandowski, newly hired policy adviser Stephen Miller, national co-chairman Sam Clovis, national spokeswoman Katrina Pierson, and more. Each serves a particular purpose, as does every message Trump transmits through these various mechanisms to voters.

That includes the music that plays at his rallies. So, when Trump came on stage to “Revolution” from The Beatles—and left the stage to it—on Monday night, the night before the primary election here in New Hampshire as he was making his closing pitch, there’s a reason. When Trump took the stage and left the stage at his victory speech after his landslide win in New Hampshire’s primaries—and blared “Revolution” from the speakers again—there’s a reason. All night long, the ever-influential proprietor of the Drudge Report, Matt Drudge, ran a bright red headline above the election results under Trump’s photo on one side and Sanders’ on the other: “REVOLUTION!” 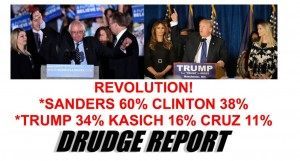 The Beatles’ song certainly took on a different political meaning—the context and times were different back in the late 1960s—when Lennon wrote it and the band came out with it, bit Trump has now purposefully incorporated an entirely new meaning of it into his 2016 narrative. That meaning, or the theme Trump is angling for, is that this election is a “REVOLUTION” by Americans against the elites. He constantly talks about “the silent majority” not being silent anymore, and how his supporters are a “movement.”