In a follow-up to a story written last week, PredictIt, a real-money political prediction market or “the stock market for politics,” indicates Donald Trump is now the April primaries runaway favorite in six states and a toss-up in Wisconsin with a close 2nd place to Ted Cruz.

Presently, the predictions market odds indicate that Wisconsin is the only state that’s “in play” for Ted Cruz, with all other April primary states showing John Kasich in 2nd place behind Trump.

“The markets have really been ahead of the polling and ahead of the pundits,” says David Rothschild, who studies them for Microsoft Research.  In A PBS NewsHour special, he told economics correspondent Paul Solman, “Many of us rely on polls and pundits when it comes to presidential prognostication. But your best bet for accurate and reliable political predictions, it turns out, is actually the marketplace.”

Political prediction markets like PredictIt incorporate all available information — including polling data and political analysis. Rothschild further stated, “the evidence clearly shows that markets where you can bet on — or invest in — political outcomes are more accurate than any collection of pundits or statistical polling averages — and extremely well calibrated. Is it gambling? Is it investing? Call it what you will, but putting your money where your mouth is has a beneficial impact on democracy. People start paying attention in a way that they never did before, so they make an effort to learn about politics, to understand politics, to engage in politics.” 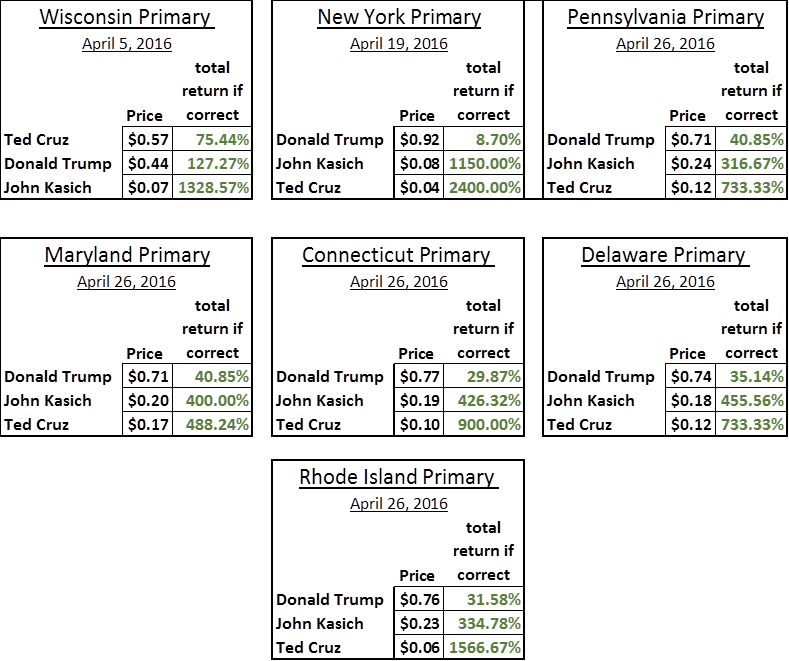 * Each share purchased is redeemable at $1.00 or goes to zero depending upon win or lose.

According to both Predictit and Paddypower, Donald Trump still remains the closest place GOP Candidate to 2016 presidential favorite Hillary Clinton.  All other remaining GOP Candidates that include; Ted Cruz, Mitt Romney, John Kasich and Paul Ryan lag behind Bernie Sanders by a considerable amount of at least 200% and trail Hillary Clinton by factors of at least 1,500 percent or higher. 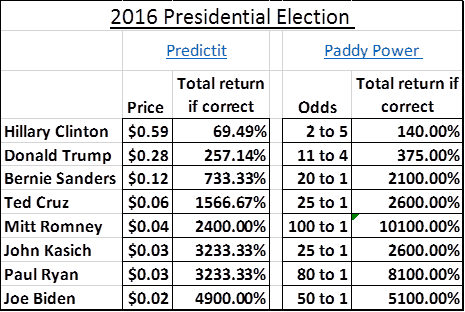