The chairwoman of the Boulder County GOP has admitted that grave errors affected the Colorado Republican caucus, in which Ted Cruz won a clean sweep of 34 delegates without opening up the process to voting by everyday citizens.

Breitbart News has obtained an email that Boulder County GOP chairwoman Peg Cage sent to other top Republican officials in Colorado, including to other party chairs, describing the errors in the process that led to “the perception of fraud.” Reached for comment on the email, Cage said that the caucus might have to be done over.

Since Breitbart News’s original report on massive voting problems at the caucus — including names of candidates being left off ballots and at least one woman not being able to vote — insiders have come forward to tell this reporter about other alleged inconsistencies, including a screw-up in the Pueblo and Mesa counties that led to one county having twenty more ballots and another twenty less. Trump supporters even protested the results of the caucus on the steps of the Colorado State Capitol.

“Rather than spend their time working on try to build integrity and correct errors — I know that’s happening they’re working on it right now —today at 1:30 there’s a bill being pushed by [state chairman] Steve House to push from a caucus system to a primary system as if that would change things,” Boulder County chairwoman Peg Cage told Breitbart News.

“The Trump supporters think that the Cruz supporters stole the election. The Cruz supporters were very concerned that they might not get seated in Cleveland” so they have been publicizing that the Trump campaign does not plan to contest the results, Cage said. But those delegates could still be un-seated by the Republican National Committee.

“If it’s that bad, I guess if there’s any question that our delegates won’t be seated, then that would be a case where it might make sense to have a do-over,” Cage said. “I would say it would. It might be the better way to go just to make sure that our delegates, they ought to be able to go forth and get seated.”

“I think they were mostly, from what I saw, clerical errors. To me, it’s inexcusable … The ballots themselves had names missing. People who had signed up.”

“It seemed to happen in all of the districts. So I guess the state has something to do it because it was up to the state who received those forms … There were many people at the state convention itself who they had to say, well this person was this number and it doesn’t appear that way in the book. It just wasn’t clean … It wasn’t clean because of those clerical mistakes,” Cage added.

Cage indicated that she is not a Trump supporter, but rather a Cruz supporter simply concerned with electoral integrity, saying, “As a county chairman I can’t publicly declare. I do have a favorite … Well, I was standing up by the stage when [Cruz] was up there.”

“Changing the process by which we get to counting votes won’t change the perception of fraud,” Cage wrote. “There were problems with the election in Colorado Springs:

Cage was referring to Secretary of State Wayne Williams, who showed up to the caucus in an orange Ted Cruz shirt and was photographed with Cruz election lawyer David Sawyer in a Facebook photo: 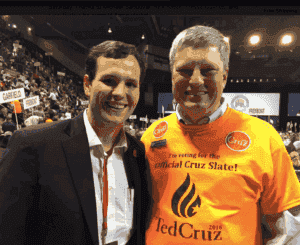 SOLUTION:  We, the elected party officials for our counties, are responsible to call for a complete airing of the problems, including naming each offended party and the candidate they pledged to support and showing all ballots with their additions and omissions.  A flow chart, like Anil’s, for each county should be included to show that procedures were followed correctly to get delegates to the assembly.  We must insist that professional clerical staff be added and trained at the State level to avoid mistakes that cause such contention…

…There were mistakes- people who had filed their Intent to Run forms were not put on the ballot. It happened in every CD and at the state assembly. I’m pretty sure it wasn’t done to favor Cruz, as his Colorado campaign chairman, Ken Buck, was left off the CD4 ballot. But it happened frequently enough that the perception was that fraud had been committed. That was bad, but leaving numbers off of a simple sequenced number ballot is inexcusable. These were simply clerical errors (I hope – see, there’s room for doubt), but they brought division among our ranks and could have been prevented if the staff had been more professional and double-checked their work.

Steve, if you see this note, that’s why it’s seen as bad for me to be on your side. You ran on election integrity and promised that you’d create a team of people that could train us at the county level to watch for fraud in our elections, but that hasn’t happened yet. Republican County Clerks should be included in such a team, but there also need to be folks who are not Clerks. Clerks get re-elected if they make voting easy, but as we’ve seen in this discussion, ease of voting doesn’t equate to integrity in voting…You may not agree with my particular solution, and I am certainly open to discussion that leads to the best solution, but we must take the blame and make it stop here. Or lose.

“There was never any concern about the delegation being un-seated to begin with,” Kohli said.