Target’s decision to open all of its changing rooms and bathrooms to mixed-sex visitors has created a social-media tornado, with one Facebook video now reaching more than 320,000 shares.

“You have lost your-ever loving mind,” reported Pastor Greg Locke who earned the 320,000 shares and 38,000 comments after quizzing a manager at a Target store about the new rule. The rule allows transgenders — but not normal people — to decide if a changing room or bathroom will have people from both sexes. The managers say they’ve opened the bathrooms and changing rooms to both sexes because of a law, he said, adding “I used to smoke a lot of dope, but I’ve never been that stupid.”

“Guest what, #TargetMissedTheMark, because this was a very, very dumb move,” he concluded.

The public rebuke of Target’s new rule is not surprising. The new rule directly benefits transgenders, who comprise as few as 0.03 percent of the adult population, or perhaps one in 2,400 people — and it  leaves the other 99 percent with no choice but to agree to share changing rooms and bathrooms with people of the other sex.

Many are taking the only other choice offered by Target — to shop elsewhere. The online boycott by the American Family Association now has more than 900,000 names. 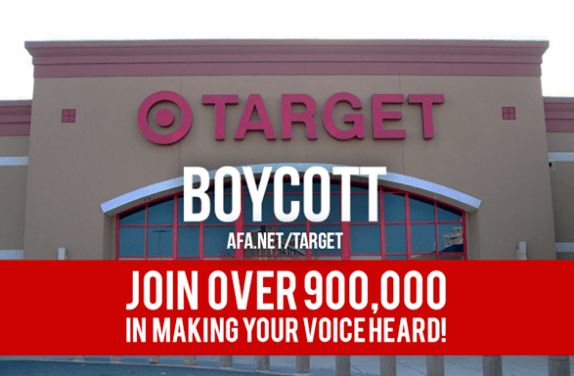 Dear America,
Today I walked into my local Target and politely asked for the manager. After introducing myself, I got right to the point of my visit. I asked her what this Target’s specific policies were concerning bathrooms, and who had access to what bathrooms. She hesitantly answered with what we are all aware of, that both the male and female restrooms are now neither; they’re gender neutral. To clarify what that meant I asked her, “so if I were to walk into the restroom labeled ‘women’s’ right now, a man could legally walk in right behind me with no questions asked?” She replied with a nod of her head and said yes. I proceeded to tell her that as much as it disappoints me, I will no longer be able to provide Target with my frequent business any longer. Target claims to want everyone who walks in their store to feel like they belong, which is the reasoning behind this sudden change in restroom etiquette. Ladies and gentlemen, I’m not worried about sharing a bathroom with someone that’s transgender, lesbian, bisexual, etc. I’m worried about going into a bathroom with my beautiful blonde haired niece, and a man LEGALLY being able to waltz in right behind us with no one stopping him. We need to wake up to what’s happening around us and stand up for what we believe in. Someone said to me recently that conservatives aren’t radical enough to stand up to this chaos and fight it. Well, I beg to differ.#byetarget

Tirzah and I went to ‪#‎Target‬ this morning.

I explained to her on the way how some men think they’re women and wear dresses and makeup and want to use the women’s washrooms instead of the men’s. I asked her what she thought of that. She said, “That’s weird.” And was quiet for abit. Then she said, “If a man walked into the women’s washroom I’d fight him until he got out!”

We kept talking and I explained to her that we should be kind and loving to everyone, because everybody is a person with a heart and feelings. But that you can also disagree with the way they’re acting, and think it’s weird.

So we got to Target and introduced ourselves to the manager. I asked her on a practical level how Target’s policy worked out if my six-year-old daughter walked into the women’s restroom and someone with a biologically male body walked in behind her. She said Target has always had a policy of non-discrimination, and that if parents had concerns we could use the family rooms, or Tirzah could come in the men’s washroom with me. I told her that as a concerned dad, I’m uncomfortable with Target’s decision to allow people with male bodies in the women’s washrooms. And that we think it’s weird. We thanked her and left. I kept the whole conversation really polite and as relaxed as possible.

So here’s what so wrong about this. Target’s recent ‘inclusivity’ announcement concludes by saying “Everyone deserves to feel like they belong. And you’ll always be accepted, respected and welcomed at Target.” Really? Telling me you’re ok with men walking into the bathroom behind my baby girl actually doesn’t make me feel like I belong. It didn’t make her feel like she belonged either, to hear the manager tell us that in person. Basically Target just told us – and millions of concerned parents – that we’re no longer accepted, respected, and welcome in their stores.

My friends, Target has crossed a line, and I believe this is a test case. If you’re a concerned parent I invite you to do three things. 1. Share this story. 2. Then go to your nearest Target and do exactly what we did. 3. Then share your story, and use this hashtag: ‪#‎byetarget‬

Liberals are getting in on the Facebook fight. This pro-Target video include swear-words and insults towards conservatives — at it has 300,000p-plus hits.