Former Secretary of State Hillary Clinton has badly underperformed in 2016 compared with her first run for president in 2008, a new data analysis done exclusively by Breitbart News shows.

It’s particularly telling that she’s gotten fewer votes in 2016 than she did in 2008, especially because of the fact that the 2008 race was a three-way race for some time between Clinton, now President Barack Obama, and ex-Sen. John Edwards. She was, despite being the frontrunner for some time, the ultimate loser of that race—and she got more votes that year in a much more competitive primary that she ended up losing than she has this year against a devout, proud socialist in Sen. Bernie Sanders of Vermont.

Clinton is widely expected to be the Democratic nominee in 2016, but her poor performance in the primaries—which many believe she should have wrapped up long ago—may drag her down heading into the general election, as even many Democratic voters seem to distrust her. To win in November, Clinton will need a strong showing from the Democrat base. This data seems to suggest that she has significant problems with her own party’s core voters, meaning that if whoever wins the Republican nomination is able to woo these disaffected Democrats into the GOP camp, there could be a blowout in November for the Republican nominee.

Specifically, the data shows, Clinton has seen a decline of 273,321 votes from 2008 to 2016 among states that have already voted this cycle. That 2.15 percent decrease nationally is exacerbated in several key states that Clinton would need to win to secure the presidency in a general election, suggesting that she’s extraordinarily weak on the electoral college scale nationally—and that whoever wins the GOP nomination will likely be able to thump her in the general in November. 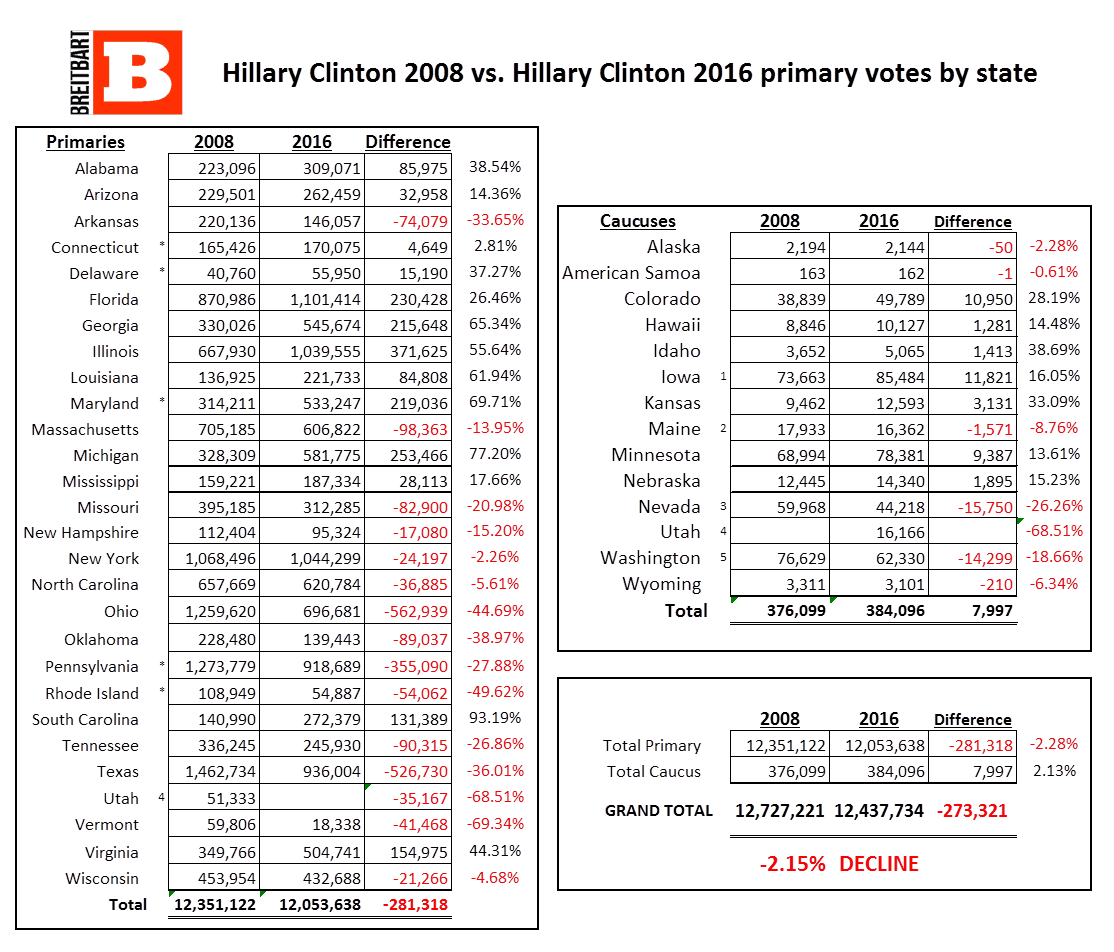 While some of those states are deep red Republican states in presidential elections — like Arkansas, Texas, Utah, Wyoming, Alaska, and Tennessee — most of them are blue states or purple states. Blue states, where Democrats are usually expected to win easily but Clinton has seen a drop off in her 2008 versus 2016 vote totals include Rhode Island, New York, Massachusetts, state Washington and Vermont. Purple states, where both parties have a shot pretty much every time but where Clinton has crashed compared with eight years ago include Pennsylvania, Ohio, North Carolina, Wisconsin, Missouri, and Nevada.

In Rhode Island and Massachusetts, two northeastern states that billionaire Donald Trump has won in the GOP primary, bottomed out their support for Clinton between 2008 and 2016. Back in 2008, 705,185 Massachusetts voters backed Clinton in the Democratic primary. In 2016, nearly 100,00 fewer voted for her—with only 606,822 voting for her, a 13.95 percent decrease.

In the critical battleground state of Pennsylvania, Clinton is down 38.97 percent or 89,037 votes.

Even New York, where Clinton won last week in a victory that seemed to mark the beginning of the eventual end for Bernie Sanders, Clinton saw a 2.26 percent decrease from 1,068,496 in 2008 to 1,044,299 in 2016. That’s especially significant since New York state elected Clinton to the U.S. Senate after she was First Lady of the United States in the 1990s when her husband Bill Clinton was president.

Breitbart News compiled this data analysis from information purchased from Dave Leip’s Atlas of U.S. Presidential Elections. That data, available at USElectionAtlas.org, is widely used by academics and media organizations including the New York Times, the Economist, Harvard, Columbia, Cornell, and many more reputable organizations.

There are four caucus states—Iowa, Nevada, Maine, and Washington—where Democrats don’t report final vote totals for turnout or official total votes per candidate, but only report percentages per candidate and delegate totals. In those states, Breitbart News calculated an estimate of Clinton’s vote totals based off the percentages the parties report and the reported or estimated voter turnout as contained in a previous Breitbart News data analysis.

What’s more, the five states that voted this Tuesday—Connecticut, Rhode Island, Delaware, Pennsylvania, and Maryland—do not yet have final, certified vote totals so those numbers may change in the coming days and weeks but not by much.

This is the fourth in a multi-part series in Breitbart News’ election metadata analysis. The first examined a massive spike in GOP primary turnout in 2016. The second walked through how Mitt Romney, in 2012’s GOP primary, received about 2 million fewer votes in states that have already voted than 2016 GOP presidential frontrunner Donald Trump. The third walked through how Democratic primary turnout has collapsed in 2016 versus 2008. More data is on the way.