As the influx of unaccompanied illegal immigrant minors from Central America has increased, so too has the cost to assist each migrant, according to a new report from the Center for Immigration Studies.

CIS senior researcher Nayla Rush, the author of the report, reached the cost per UAC by looking at the total budget requests for UACs in FY 2017 and the number of UACs expected to illegally cross into the U.S. in FY 2017.

“The Unaccompanied Children (UC) program FY 2017 request is $1.226 billion in funding, which is an increase of $278 million from the FY 2016 enacted level of $948 million,” the report reads. “Also included in this FY 2017 Unaccompanied Children program budget request is a contingency fund triggering additional funds not to exceed $400 million. It is expected $95 million will be used from this contingency fund in FY 2017.”

The Obama administration is projecting that it will need to cope with at least another 75,000 UACs illegally crossing the U.S.-Mexico border in FY 2017. 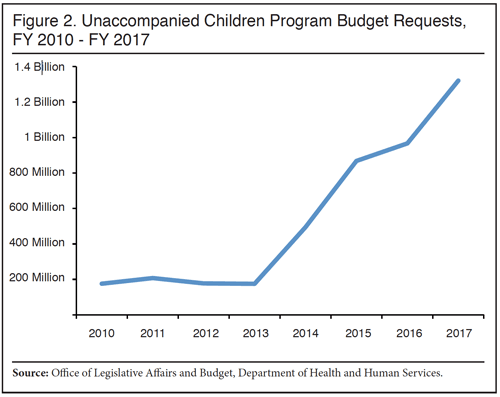 The U.S.-Mexico border has experienced a surge in illegal immigration from Central America in recent years with UACs and “family units” crossing into the U.S., seeking to stay. UACs from noncontiguous countries in the are granted special treatment once apprehended in the U.S.,  and placed in the care of — often other illegal immigrant — parents and sponsors ostensibly to await immigration hearings.

While immigration activists and Democrats blame the influx on “push factors” like violence in the migrants’ home countries. Immigration hawks and Republicans have pointed to the Obama administration’s dilution of immigration law and executive amnesty for the migration.

The Senate Subcommittee on Immigration and the National Interest, chaired by noted immigration hawk Sen. Jeff Sessions (R-AL), recently found that just 3.6 percent of the UACs apprehended illegally entering the U.S. over the past 2.5 years have been sent back to their home countries.