In a special report for Reuters titled “Why an emblematic American city has turned to Trump,” Timothy Aeppel writes of the post-industrial travails of the once thriving factory town of Muncie, Indiana, where white working class voters are rallying behind Donald Trump’s populist message – many voting Republican for the first time.

One night a month, retired auto workers shuffle into a former elementary school classroom here to discuss their legal fight against the company that cancelled their health care benefits seven years ago.

But the conversation often turns quickly to presidential politics.

“It can get pretty heated,” says Gerald Poor, the group’s 77-year-old president, of their political discussions. “I call it to order if it gets out of hand.” 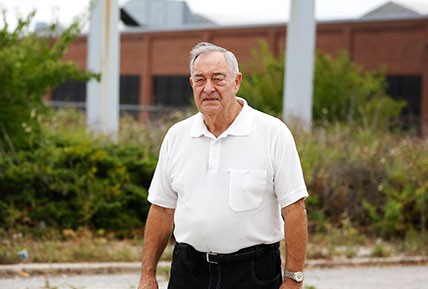 Gerald Poor worked at the BorgWarner factory for over 40 years. (Chris Bergin/Reuters)

Their anger is understandable. The group is a remnant of a once-powerful United Auto Workers union local, which at its peak in the 1960s represented over 5,000 workers who made transmissions in Muncie for BorgWarner Inc, the global auto parts maker. An American flag drapes the wall at one end of the room, portraits of former labor bosses line the other, salvaged from a union hall that had its own baseball field.

For this group of mostly white, working-class men, the last two decades have brought much loss. In this election – with the victory of the populist Donald Trump as the Republican Party nominee and the strong run by the populist Bernie Sanders for the Democratic Party crown – many say they feel they’re finally being heard again.

Working-class white men were once a force to be reckoned with in American politics. Many here speak wistfully of how John F. Kennedy stopped at BorgWarner to talk to workers when he campaigned in 1960. For these men, this year’s election is a rare taste of the clout they once took for granted. 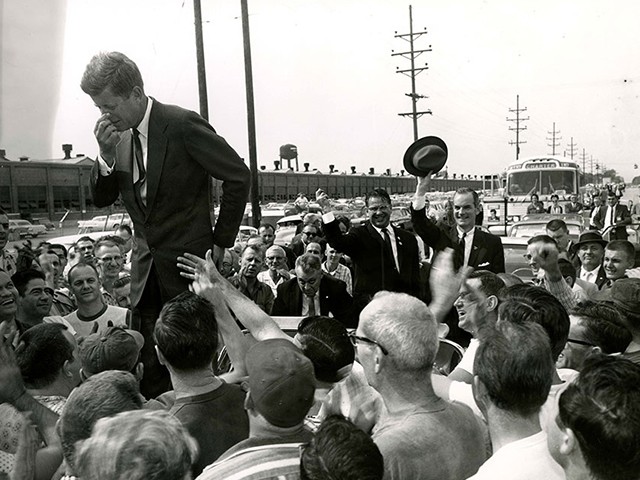 In the primary, Trump received the most votes of any candidate in either party in Delaware County, which encompasses Muncie. Just over 52 percent of Republican voters went for Trump. Democrats picked Sanders over Hillary Clinton by an even wider margin.

“Candidates in the past made a lot of promises to the working class in this country and failed to follow through with it,” says 66-year-old Bruce Reynolds, who followed his father and grandfather into a career at BorgWarner.

Gazing through the rusted chain link fence that encircles the sprawling, abandoned factory, where he notes with precision that he worked for “32 and a half years,” he says he’s still skeptical of both side’s promises.

Neither Trump nor Clinton was his first choice. Reynolds and his wife voted for Sanders in the primary, he says. Among other things, they couldn’t support Clinton: She’s the wife of former President Bill Clinton, who signed the North American Free Trade Agreement, which many here blame for Muncie’s economic decline.

An analysis by Reuters found Delaware County is an extreme example of the declining fortunes of America’s white working-class men.

In 2000, white men with less than a college degree accounted for about three-quarters of all white men living in the county. By 2014, their proportion had dropped by about 5 percentage points, according to the U.S. Census Bureau. But while this group’s share of the population held relatively steady, the earnings of white men with full-time jobs had fallen dramatically.

In essence, white men in Muncie have slid down from every rung of the economic ladder. They have clustered at the bottom, poorer and more isolated than before, even as the overall U.S. economy has grown and globalized.

The same trend is visible in faded industrial pockets from New Jersey and upstate New York to Alabama and Kentucky. 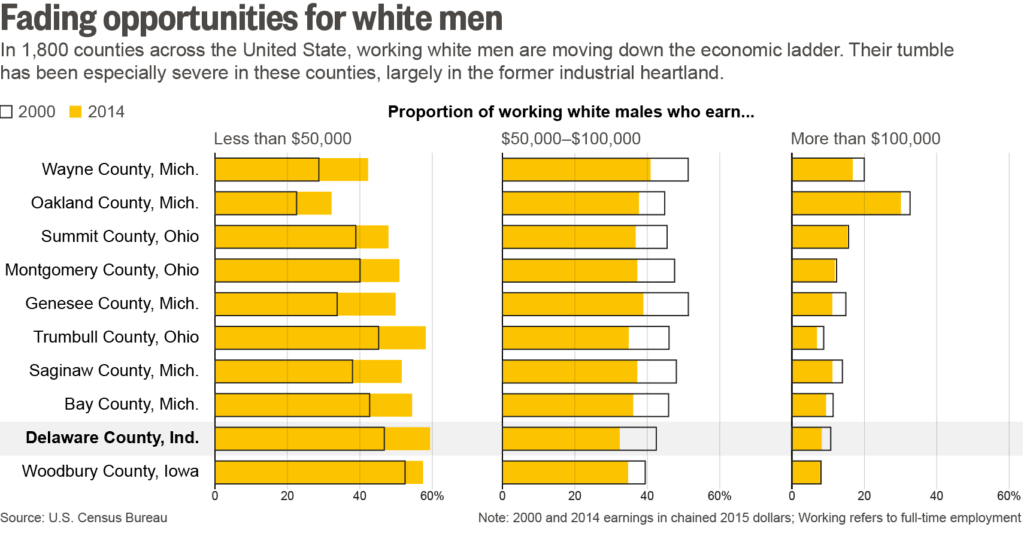 According to the data, in about 1,800 counties across the United States—nearly 60 percent of those where data is available—the share of white men in the lowest group of earners has grown over this period. The trend is particularly pronounced in the Rust Belt states of Michigan, Ohio and Indiana.

Jonathan Haidt, a social psychologist at New York University’s Stern School of Business, studies how people adopt their political beliefs. “Trump is the first candidate to speak to—and speak for—working-class white men in a long time,” Haidt says. That separates him from the last two Republican nominees. Mitt Romney, who lost in 2012, didn’t do that, “and John McCain didn’t particularly reach out to that constituency” in 2008.

Muncie was once the epitome of America’s muscular manufacturing economy. After natural gas was discovered here late in the 19th century, the city attracted dozens of energy-intensive glass manufacturers, most notably Ball Corp, which built sprawling factories that churned out millions of mason jars.

The auto industry followed, and Muncie became a hub for transmission making. The term “Muncie transmission” is still used by hot rod enthusiasts when talking about gearboxes produced here by General Motors Corp in the 1960s. One particularly powerful version is the “rock crusher,” used in Corvettes and other muscle cars.

BorgWarner, based in Auburn Hills, Michigan, has even deeper roots in Muncie than GM. Warner Gear was founded here in 1901 and merged with other businesses to create what became BorgWarner in the late 1920s. Many former workers here still call it Warner Gear. 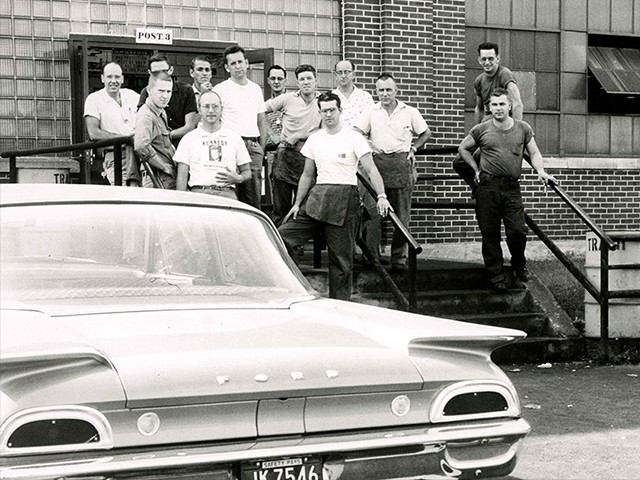 Workers outside the Warner Gear plant in the 1960s. (Reuters/Courtesy of Ball State University Libraries)

In the 1920s, a husband-and-wife team of sociologists picked the city to study the values in a typical American community. They called it “Middletown,” to conceal the identity of a place they felt was emblematic of the country as a whole. Muncie residents soon figured out it was all about them.

Michael Hicks, a Ball State economist who studies manufacturing, says a mix of exasperation with unions and the political elite created the perfect opening for Trump. “It’s always easier to blame a larger force for your problems, whether that’s Mexicans or greedy factory owners,” he says. “But these people aren’t stupid. They know the jobs aren’t coming back.” The bigger concern for many of them, he says, is what will happen to their children.

The Reynolds family is a good example. Bruce Reynolds’s oldest son, Bruce Jr, is a Baptist pastor and is supporting Trump, albeit reluctantly. “I don’t think any of them can fix it,” Bruce Jr says of the fallout he sees from economic hardship in his congregation, from growing drug addiction to broken families.

Reynolds’s second son, Robert, followed his father into BorgWarner after high school. That job didn’t last. After just four years, he was laid off in 1994 during a wave of downsizing. He and his father say it was a trauma from which he never fully recovered. 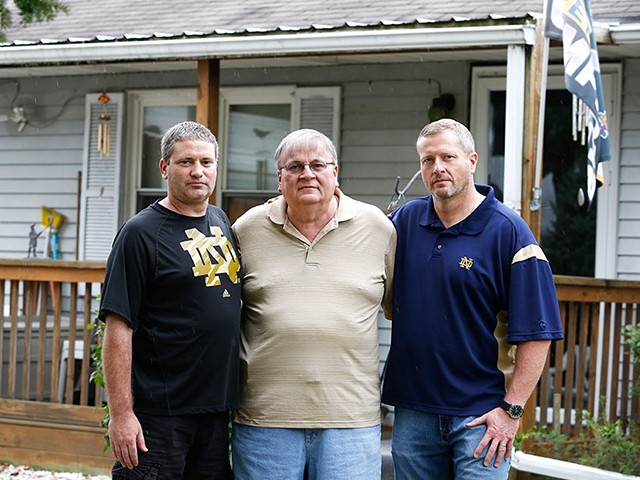 “I make $8 an hour less now than I made 21 years ago,” says Robert, who enthusiastically backs Trump. After a series of low-paying jobs, including a stint at Wal-Mart and as a manager of a video store, he now works overnight shifts at a warehouse for $18 an hour. He likes the job, he says, although the company recently cut three paid holidays, including the Fourth of July.

To be sure, Muncie has retained some of its smaller factories, and other jobs have come in, including a call center that tracks down delinquent student loans and a Caterpillar Inc locomotive factory that moved into an old plant. But none of these are unionized, and the wages and benefits aren’t as high as the old places offered.

One frustration for locals is that the statistical measures of the economy don’t seem to reflect what they see around them. Muncie’s jobless rate is 5.7 percent, less than one percentage point higher than the national rate of 4.9 percent or Indiana’s 4.6 percent.

But the impact of deindustrialization—including the exodus of over 10,000 factory jobs since 1970 in a city of only 70,000 people—is visible almost everywhere.

Most of the departing companies tore down their factories, leaving lots strewn with weeds and rubble. BorgWarner left a handful of structures—including a 1.2 million-square-foot sprawl of red brick and steel near the edge of town.

The city, especially the once-thriving white working-class neighborhoods on the south side, is now dotted with over 2,000 abandoned houses. Some can’t be occupied because they were contaminated by chemicals left behind by meth labs. 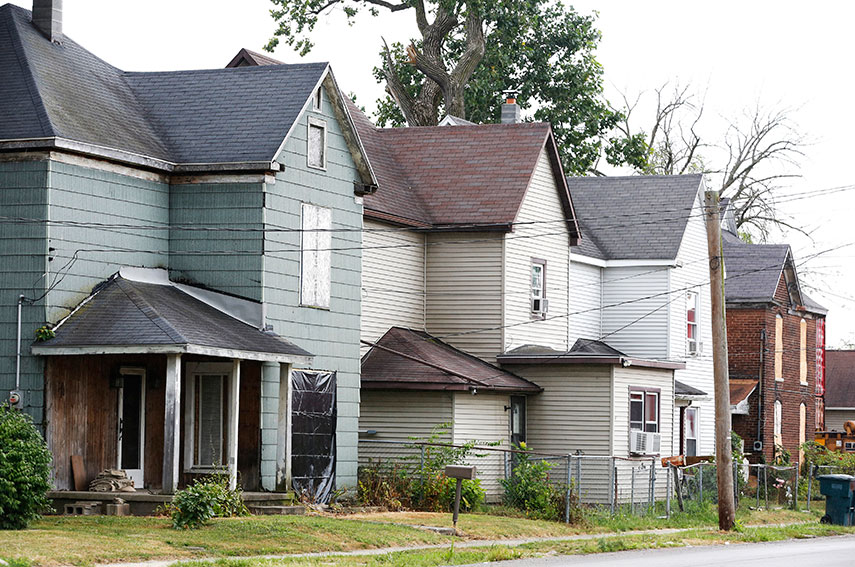 But the economy alone doesn’t explain Trump’s appeal. Another family with deep roots at BorgWarner is the Lephart clan. At one point in the 1950s and 1960s, the patriarch and nine of his sons worked there…. David Lephart, whose father is one of the nine brothers, avoided the decline entirely through shrewd job-hopping and retraining—but he’s still a Trump supporter. He commutes to a UAW job as a pipefitter at a GM plant in Marion, Indiana. He earns about $100,000 a year, with overtime, he says, and has put both of his children through college.

The 58-year-old says one thing that influenced his transition from Democrat to Republican was talking to his children, whom he describes as part of the “business world.” His son is now a stockbroker in Indianapolis.

“For the first half of my life, I thought Democrat was the only way to be,” Lephart says. “There’s this belief that you can’t be Republican and union—but I don’t believe that any more.”