The Brennan Center for Justice admits the ongoing spike in murders in the nation’s major cities when it released its September report on crime.

“Nationally, the murder rate is projected to increase 31.5 percent from 2014 to 2016 — with half of additional murders attributable to Baltimore, Chicago, and Houston,” the group said in its summary of its new report, “Crime in 2016: A Preliminary Analysis.”

The report was issued just ahead of the FBI’s semi-annual report on nationwide crime rates, due out Monday, Sept. 26.

The group’s admission of a massive jump in murder is a sharp change from its prior  summary of crime in 2015, when it reported “the average person in a large urban area is safer walking on the street today than he or she would have been at almost any time in the past 30 years.”

The Center projected overall crime would rise 1.3 percent in 2016 while violent crime by 5.5 percent, while rushing to assure readers “violent crime remains near the bottom of the nation’s 30-year downward trend.”

But the report, which relies on police data from 22 cities, admits the massive rise in murder rates even as it looks for evidence of a turnaround.

The murder rate is projected to rise by 13.1 percent this year, with nearly half of this increase attributable to Chicago alone (234 of 496 murders). Significantly, other cities that drove the national murder increase in 2015 are projected to see significant decreases in 2016. Those cities include Baltimore (down 9.7 percent*) and Washington, D.C. (down 12.7 percent*). New York remains one of the safest large cities, even with the murder rate projected to rise 1.2 percent* this year.

Nationally, the murder rate is projected to increase 31.5 percent from 2014 to 2016 — with half of additional murders attributable to Baltimore, Chicago, and Houston. Since homicide rates remain low nationwide, percentage increases may overstate relatively small increases. In San Jose, for example, just 21 new murders translated to a 66.7 percent* increase in the city’s murder rate. Based on this data, the authors conclude there is no evidence of a national murder wave, yet increases in these select cities are indeed a serious problem. 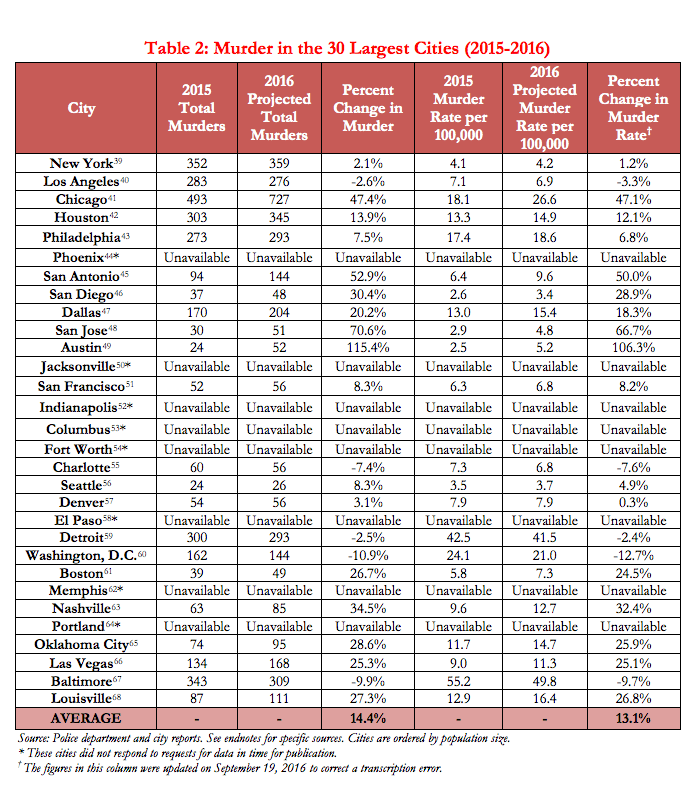 The study’s authors caution that their analysis “focuses on major cities, where increases in crime and murder were highest in preliminary Uniform Crime Reporting data for 2015,” making their report “likely [to] overestimate any national rise in crime.”

“These findings undercut media reports referring to crime as ‘out of control,’ or heralding a new nationwide crime wave,” the study states. “But the data do call attention to specific cities, especially Chicago, and an urgent need to address violence there.”

Notably, the extraordinary increase in projected murders began in 2014, when Obama began his “stigmatize-and-federalize” campaign against local and state law enforcement.

The Brennan Center bills itself as “part think tank, part advocacy group, part cutting-edge communications hub” and has pushed hard for a sentencing rewrite at the federal level.

Criminal justice experts said the center appears to be trying to bury the shocking murder increase.

“When the murder rate increases by nearly a third in two years, that, ladies and gentlemen, is a national crisis,” wrote former federal prosecutor Bill Otis, accusing the Center of “aggressive deceit.”

“The Brennan Center’s attempt to minimize the crime spike is something to behold,” he continued. “Thus, it reports: ‘Crime overall in 2016 is projected to remain the same as in 2015, rising by 1.3 percent. Twelve cities are expected to see drops in crime. These decreases are offset by Chicago (rising 9.1 percent) and Charlotte (17.5 percent). Nationally, crime remains at an all-time low.'”

“Only when there is an overall increase in crime, even only a small one, crime has not ‘remain[ed] the same.’  And the Center’s statement that ‘crime remains at an all-time low’ is a point-blank lie,” Otis wrote at Crime and Consequences. “According to statistics from the Uniform Crime Reports, violent crime rates were lower, and in most years much lower, in the crime-growing decade of the 1960’s than they are now. The same is true of property crime in the years 1960 through 1966—it was lower when I was in college than it is now.”

“Of course, you might be less inclined to think that a 1.3 percent increase in crime is ‘small’ if you were one of the approximately 123,000 additional crime victims this percentage represents,” he added.

Professor Douglas A. Berman at the Moritz College of Law at Ohio State University noticed the significant increase;

I fully appreciate the considerable importance and enduring challenge of collecting and reporting on crime data accurately. But, with all due respect to the work of the fine folks at the Brennan Center, I am troubled that this report seems presented in a way that tries to downplay a number of disconcerting numbers. For starters, a 1+% increase in overall crime is a slight increase, not crime “remaining the same.” Moreover, I do not think it fair to assert that crime “remains at an all-time low” just after reporting it is going up a little bit. Similarly, a 5+% increase in violent crime strikes me as a notable increase, not just a “slight” one. And finally, the fact that murder is projected to be up another 13+% in 2016 after a significant spike up in 2015 does, at least in my view, lend credence to at least the claim that the US in now in the midst of a “new nationwide [homicide] crime wave.”

“I am seeking to note that suggesting there is little to see/note here fails to deal with distressing reality that violent crime and especially murder continue to be going up significantly in 2016 even after they went up a significant amount in late 2014 and through all of 2015,” Berman replied to one commenter who accused him of trying to “get folks worked up.”

“Is it evenly distributed between highly urbanized areas and suburban and even rural areas? Large cities are not the entirety of the nation,” wrote one commenter.

“Because this report… looks only at 50 largest cities in US, it can only make conclusions based on reports from those cities. I share your interest in getting more data from other regions, but there is a long time-lag before we will get true nationwide crime data from official govt sources like the FBI,” Berman wrote in reply.

The FBI is expected to release 2015’s crime statistics on Monday, the day of the first presidential debate.