A new survey shows vast gaps between the opinion of elites and of ordinary Americans about the burdens and costs of legal immigration.

In some ways, that gap in the Democratic Party is larger than the gap in the GOP, which has torn itself in two this year over the issue.

Sixty-seven percent of GOP supporters, but only 16 percent of GOP leaders, see large number of immigrants as a critical threat. That’s a larger 51-point gap, but a smaller four-fold difference of opinion between elites and ordinary GOP members, than seen in the Democratic Party. 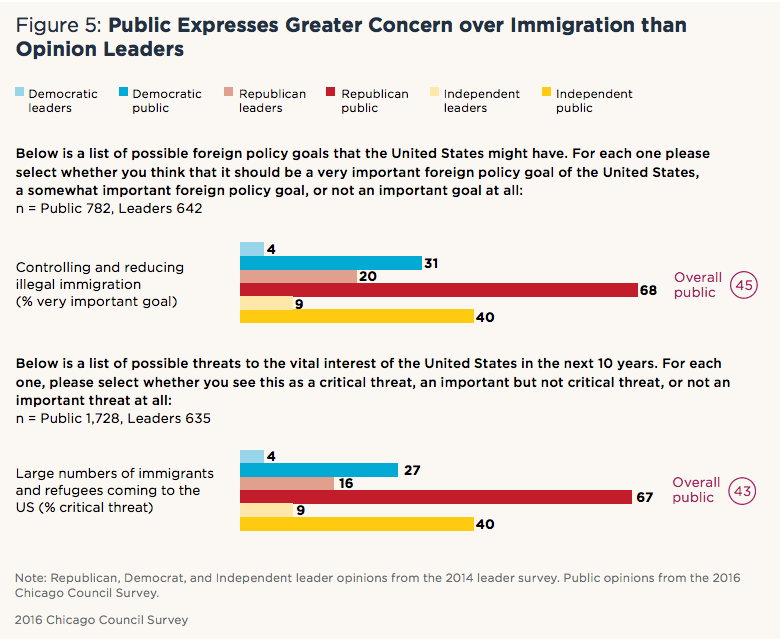 The survey of 2,061 adult Americans was published Oct. 6 by the Chicago Council on Global Affairs.

The new survey also inadvertently undermined the Democrats’ claim that the Americans’ broad opposition to cheap-labor immigration, and job displacement by immigrants, is powered by mental illness, or “xenophobia,” instead of by normal economic, cultural and national community priorities. “You know, to just be grossly generalistic, you could put half of [Donald] Trump’s supporters into what I call the basket of deplorables,” Hillary Clinton said Sept. 9. “They’re racist, sexist, homophobic, xenophobic, Islamophobic …. some of those folks, they are irredeemable, but thankfully they are not America.’

That positive view of Mexicans-in-Mexico is shared by 80 percent of Republicans, 80 percent of all Americans, and 82 percent of Democrats, leaving Trump’s supporters with similar generous attitudes as other Americans towards foreigners living in their own countries.

The survey also showed greater empathy among Trump’s supporters — compared to among Democrats — for their fellow Americans who have to pay the huge social and economic costs of mass-immigration. 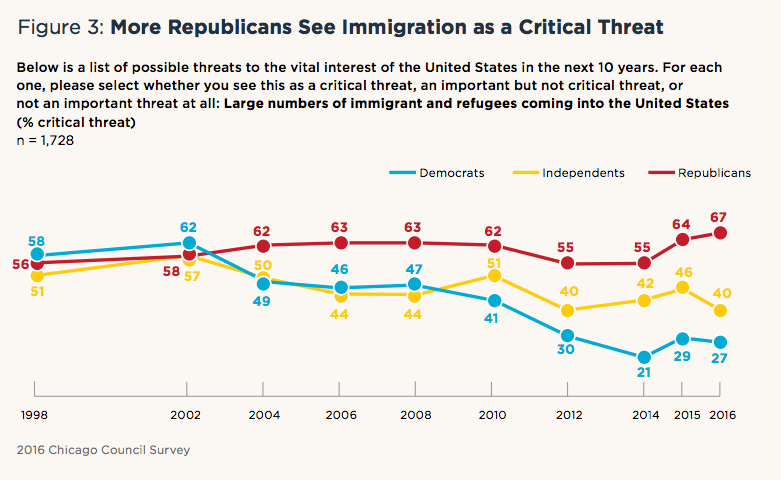 Each year, 4 million Americans turn 18 years old and enter the workforce. But, each year, the federal government also imports 2 million immigrants, guest-workers, refugees and asylum seekers and illegal immigrants. The inflow of professionals and workers drives down the salaries of American white-collar and blue-collar workers while boosting income for investors and employers.

The inflow also crowd the schools used by the children of lower-income Americans, sharply increases tax transfers from Americans to immigrants, reduces innovation and productivity, pushes many lower-skilled Americans out of the workforce, and enables large-scale violence by immigrant communities against Americans who do not live in protected neighborhoods.

But immigration also provide elites with a comforting supply of cheap and disposable domestic labor and of service workers, usually housed in districts that are distant from their homes.

The survey also showed a huge increase among GOP supporters in concerns for their fellow Americans’ jobs.

The survey also dismissed hopes by elite progressives and by establishment GOP activists that the public’s worry about cheap-labor immigration will fade after the election.

Some commentators believe that Trumpism—“a personality-fueled movement that has proven, against the smart money’s predictions, to be in tune with the frustrations of a significant slice of the electorate”48— will disappear if Trump loses the election.

The data in this report suggest that this will not be the case. This election cycle has brought certain underlying tensions between Republicans and Democrats to the fore. While the divisions on the issues of immigration and globalization are now more prominent, they were not created in the past year alone. Democrats and Republicans have expressed diverging opinions about immigration since 2002, and the gap between Republican and Democratic views on globalization has grown steadily since 2008.

The council is a business-led group which has been a strong backer of cheap-labor migration for many years. In 2014, for example, a survey of the group’s members showed that 75 percent strongly backed the 2013 immigration-expansion bill — but only 18 percent were willing to let illegal immigrants get citizenship and thus likely vote against GOP candidates.

The council’s new survey does not ask Americans about the impact of immigration on their wages and salaries. Business groups profit from the annual inflow of lower-wage workers and welfare-funded immigrant buyers.

In 2013, John Rowe, a senior member of the Chicago council, and a former chairman and CEO of Exelon Corp., urged new rules to ease hiring of more immigrant workers. “Different businesses want different kinds of people. A restaurant may want waiters and cooks, a hospital wants nurses and doctors, a university wants physicists, a business like Exelon needs more engineers,” Rowe told an interviewer on Chicago Tonight in February 2013.

The Chicago council also released this month another report calling for an amnesty for the roughly 12 million illegal migrants in the United States. That report was produced with the D.C. Bipartisan Policy Center, an establishment-funded advocacy group led by former legislators.