North Carolina’s GOP governor has closed a 5-point polling gap with his Democratic rival in the last two weeks, as voters push back against the Democrats’ use of the transgender bathroom controversy to tarnish the governor’s successful economic record.

On Oct. 1, Gov. Pat McCrory was at 44.2 percent, or 3.6 points behind Attorney General Roy Cooper, according to Real Clear Polling’s average of polling results. Almost three weeks later, on Oct. 19, McCrory was half a point behind at 46.3 percent, and climbing fast.

Local GOP officials are eager to credit McCrory’s economic record for the rise.

“As we get down to the final days of the election and voters have to make a decision about who they want to be governor, they are realizing that the governor has been doing his job and getting results while the attorney general hasn’t for 16 years,” said the governor’s spokesman, Ricky Diaz.

“Governor McCrory’s rise in the polls is not surprising when you consider that North Carolina has the fastest growing economy in the nation, people are keeping more of their hard-earned money from the generous tax cuts including those for the middle class and small business owners, and over 300,000 new sustainable jobs have been created over the last four years,” said a statement from Kami Mueller, communications director at the North Carolina Republican Party. 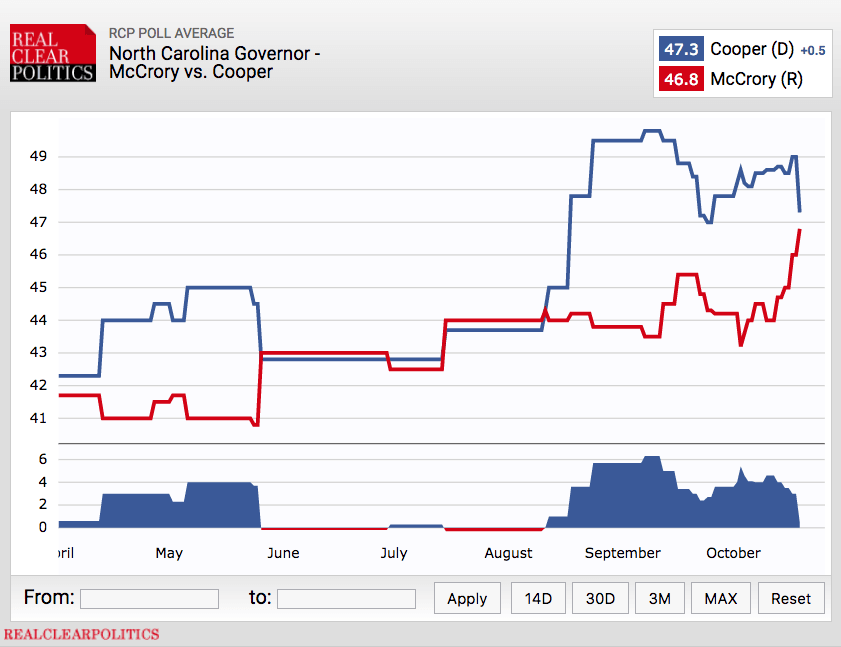 But McCrory is also gaining in the polls because he’s gradually stood up to defend the state’s civic society against the Democrats’ use of the “transgender rights” claim to help their long-term goal of barring government officials from recognizing the biological and social differences between boy and girls, men and women.

Conservatives are rallying to McCrory’s defense of normal society, “as they have the opportunity to hear [him, because] the media has refused to tell the story,” says Tony Perkins, president of the Family Research Council.

“I don’t agree with the concept of redefining gender — that is  major societal change, but it is being passed off as a political battle,” McCrory told a group of pastors at an Oct. 7 meeting hosted by the Family Research Council.

“I’ve had to do a lot of study on this… I’d never heard of it,” until gay advocates threatened to hammer the state’s economy and to spend millions of campaign dollars against him, unless he rejected the state legislation which affirms the difference between men and women.

Conservatives in the state need to rise up against this gender ideology, despite growing pressure by the media, business groups, Democrats, and transgender-sympathetic friends, he said.

The radicals “have the media on their side, and they have a lot of [public] support because people don’t understand the issue” behind the call for transgender bathrooms, he said. “You’re going to have be direct in informing people about this, because [gay activists and the media] are confusing everybody,” he said.

“The silent majority had got to quit being silent [and] you have four weeks to do it,” he said.

Since early 2016, gay advocacy groups have organized a national economic boycott of the state, supposedly to protect the right of transgender people to use the bathrooms they prefer.

However, that push for transgender rights is only part of the opposition to the so-called “HB2” privacy and security law.

The HB2 law preserves routine distinctions between men and women in school and public bathrooms and locker rooms by overriding a city ordinance in Charlotte which said people who are transgender — regardless of appearance, therapy, or biology — can use either the male or female public bathrooms.

The law is a compromise because it says that people who want to use public toilets and locker-rooms in the state must use the facility reserved for their male or female sex — but it also allows transgender people to use the opposite sex’s facilities once they’ve undergone surgery and legally changed the sex on their birth certificate.

Nationally, only about one in every 2,400 Americans have changed their name from one sex to another, according to a recent study of the 2010 census. Even pro-transgender advocates say that only one in every 160 Americans fit into a very broad definition of “transgender.”

That compromise is anathema to gay activists because it legislatively reinforces what they describe as “the gender binary,” which is academic jargon for the public’s view that society consists of male and female, with only a few mixed-sex people in between.

Gay and feminist activists really want legislators, judges, scientists, and schools to suppress the idea that society consists of just males and females. The activists instead want a society where the government forces Americans to recognize and praise so many types of gender identities and sexual orientations that there just isn’t any normal type of sexual identity. They are pushing for that goal because if there’s no normal, there’s no reason for society to favor and praise the normal heterosexual men and women who jointly create each new  generation of Americans.

But without the assumption that men and women are normal, distinct, and different, many evolved civic rules would become political battlegrounds in North Carolina and all of the United States.

The push to bury the idea of normal sexuality “sends a confusing message to children,” said Perkins.

It is problematic when you starting going into elementary or  junior schools telling kids there’s no difference between gender … kids are going through puberty, which is almost like going through re-entry from space — they’re disoriented, they’re confused about a lot of things — and to say that [teenage moods are] permanent, that it is problematic because it prevents the kids from going through the normal stages of life to normal maturity.

Since this summer, gay activists have persuaded numerous business allies and the university presidents who run sports leagues to cancel investments and sports tournaments in North Carolina. McCrory has repeatedly blamed the boycott on his rival, Roy Cooper. “He’s promoting the boycott,” McCrory told the pastors.

Cooper has also received extensive donations from gay activists, including activists in New York, as well as a flood of activists and media support from gay groups.

Also, President Barack Obama and his deputies in the Department of Justice are trying to help Cooper.

In May, he weighed in with threats to cut federal school and transportation funding unless the state’s voters agreed to the federal demand that a person can freely and frequently change their declared sex, regardless of biology. “Transgender men are men — they live, work and study as men. Transgender women are women — they live, work and study as women,” Vanita Gupta, the acting assistant attorney general for the Civil Rights Division, said May 9.

In her campaign visits to the state, Clinton also slams McCrory for support of the law that preserves the distinctions between male and female. In September, according to the Charlotte Business Journal, Clinton told her state supporters that:

HB2 is another example of trying to discriminate against people that doesn’t have any place in our modern society,” Clinton said during her speech at Johnson C. Smith. “You see this first-hand in North Carolina. Discrimination is not only wrong, it’s bad for business. The NBA, you know, canceled the (All-Star) game. PayPal canceled 400 jobs (in Charlotte). Others are not coming to this beautiful state. Because they don’t want to be associated with the discriminatory, bigoted policies of your governor and legislature.

That pro-transgender pitch is a close match for the Clinton 2016 campaign, Perkins told Breitbart News. “This ties right into Hillary Clinton and her campaign and the entire left’s disdain for people who believe their faith is something to guide their lives by,” he said. “It goes back to her description [of conservatives] as ‘a basket of deplorables,’” he said.

Polls show that Obama-backed gender ideology is very unpopular — but it is largely overshadowed by the media’s effort to blame McCrory for the economic boycott of the state.

Cooper was also aided by the Justice Department’s decision to launch an investigation of McCrory’s administration. The investigation led nowhere, and was quietly shut down, but it gave Cooper a talking point for the Oct. 18 candidate’s debate. McCrory quickly knocked that claim down, and the federal officials admitted the next day that the previously secret investigation had ended without charges — but the episode allowed the federal Democrats and local media to further hammer McCrory.

McCrory and other GOP officials are now charging Cooper with breaking privacy laws by announcing the secret investigation during the debate.

“Roy Cooper showed the true depths of his ineptitude by his willingness to do or say anything for his own political gain,” said GOP spokeswoman Mueller. “As the state’s top law enforcement officer and attorney, Cooper egregiously broke laws of ethics and rules of the North Carolina State Bar in his drive-by attempt to defame the sitting Governor of North Carolina,” she said.

“Roy Cooper has been an embarrassment as North Carolina’s attorney general for the last 16 years, and his performance in the last debate solidified he would be just as embarrassing and inept if he were to be elected governor,” she added.