Wow! Breitbart’s climate science has come under attack from a devastating new rhetorical technique: the argumentum ad puellam pulchram. (aka the Argument from a Pretty Girl)

The pretty girl in question is Kait Parker of the Weather Channel, who has rashly stepped into the lists on behalf of her employer with a video and article titled Note to Breitbart: Earth Is Not Cooling, Climate Change Is Real and Please Stop Using Our Video to Mislead Americans.

Well, it certainly makes a nice change from the usual tired old tricks deployed by the alarmist establishment — the ad hominem, the Appeal to Authority, etc. And it seems to have been quite effective, too: for a while yesterday, Weather Girl Kait’s attack was the number one item on Reddit, and I’ve received several tweets from impressionable SJW types brimming with righteous indignation at my climate-denying ignorance. Also, I know that several other organisations — including AOL — are keen to join Parker in sticking the boot in. This I find very flattering, because when the liberal media joins forces to try to humiliate you, it means they consider you a very powerful threat.

But I do wish Kait hadn’t got involved, for I fear I’m going to have to be very ungallant by revealing her entire argument to be fatally flawed.

First, a basic point of information. Parker expresses outrage that an irrelevant video about La Niña “with my face in it” was taken from the Weather Channel and used by Breitbart to illustrate an article I wrote called Global Temperatures Plunge. Icy Silence From the Climate Alarmists.

Here’s our Editor-in-chief Alexander Marlow, putting that detail right: “This is not a Breitbart video. It’s provided by and placed by a third party video vendor. The Weather Channel should chill out.” More precisely, none of Breitbart’s editors made the choice or performed the action of sticking the Weather Channel’s video on the article.

And yes, indeed, the Weather Channel should chill. And, better still, stick to its day job and actually report on the weather rather than engaging in agenda-driven politics. This is an argument the Weather Channel is not going to win, and whoever put poor Kait Parker up to this ridiculous, embarrassing stunt should be ashamed of themselves. It is going to backfire horribly, as I’m about to demonstrate.

Before we move onto the threadbare science in Parker’s arguments, let’s just first marvel at the way she has tried to blame Breitbart for something it did not do.

Global warming is not expected to end anytime soon, despite what Breitbart.com wrote in an article published last week.

Though we would prefer to focus on our usual coverage of weather and climate science, in this case we felt it important to add our two cents — especially because a video clip from weather.com (La Niña in Pacific Affects Weather in New England) was prominently featured at the top of the Breitbart article. Breitbart had the legal right to use this clip as part of a content-sharing agreement with another company, but there should be no assumption that The Weather Company endorses the article associated with it.

And her point is what, exactly? As she herself admits here, “Breitbart had the legal right to use this clip as part of a content-sharing agreement with another company.” So she understands the deal: it wasn’t Breitbart’s conscious decision to use that particular video. Rather, the video was put up there by a third party with a view to promoting the work of the Weather Channel by bringing it in front of a wider audience.

Even more bizarre is Parker’s accusation that her clip is being used by Breitbart to “mislead Americans.” How exactly? The clip, as it happens, shows Parker talking about how the cyclical Pacific Ocean event known as La Niña is going to result in a colder-than-usual weather in the US  — “in the North East you might get more of that cold air all the way through spring.”

So she’s actually agreeing with what Breitbart said in the article: that La Niña effect has been causing temperatures to drop dramatically. Apparently, in Parker’s view, it’s OK when meteorologists who believe in “global warming” say this stuff. But it’s not OK when a sceptical website like Breitbart says it.

Now let’s do what Parker urges us to do in her peroration and actually look at the science.

Parker — echoing stuff she will have read on the Internet at a couple of liberal-left attack dog sites — disputes a number of claims in the original Breitbart piece.

[Breitbart’s] CLAIM: “Global land temperatures have plummeted by one degree Celsius since the middle of this year – the biggest and steepest fall on record.”

[Parker’s alleged] TRUTH: “This number comes from one satellite-based estimate of temperatures above land areas in the lower atmosphere. Data from the other two groups that regularly publish satellite-based temperature estimates show smaller drops, more typical of the decline one would expect after a strong El Niño event.

“Temperatures over land give an incomplete picture of global-scale temperature. Most of the planet – about 70 percent – is covered by water, and the land surface warms and cools more quickly than the ocean. Land-plus-ocean data from the other two satellite groups, released after the Breitbart article, show that Earth’s lower atmosphere actually set a record high in November 2016.”

Wrong. Lots of other temperature datasets confirm what we say to be true – those covering sea as well as land. 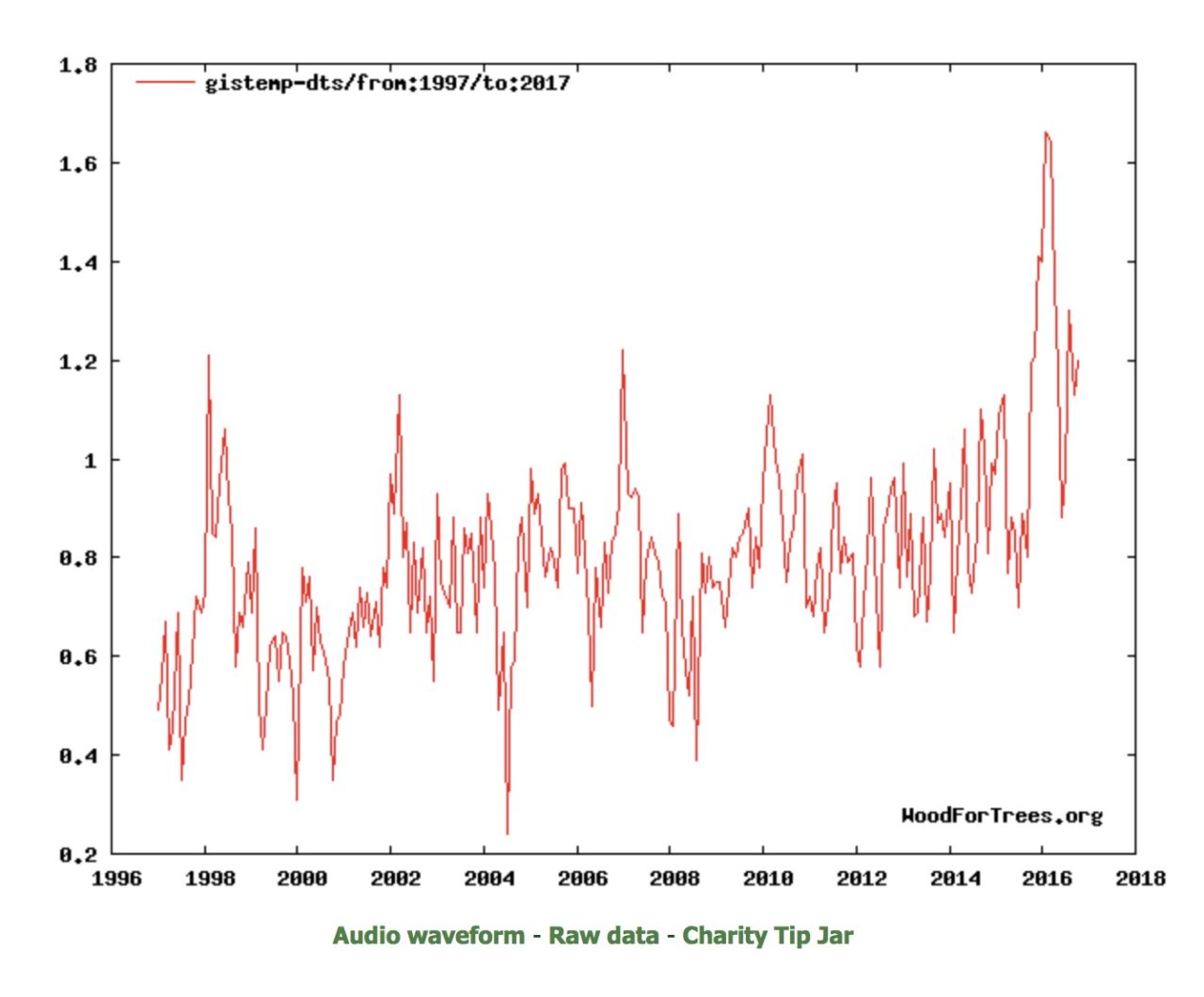 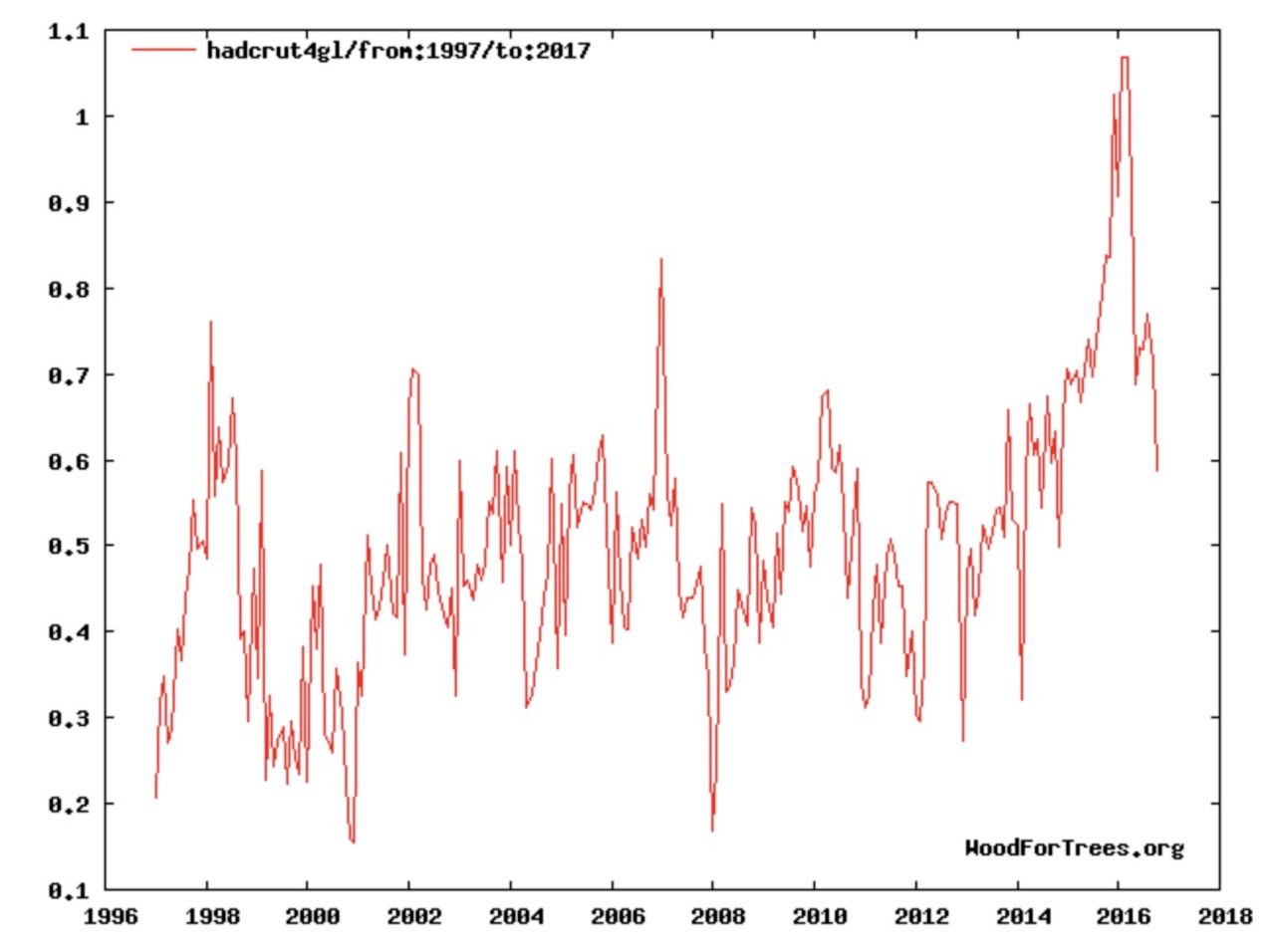 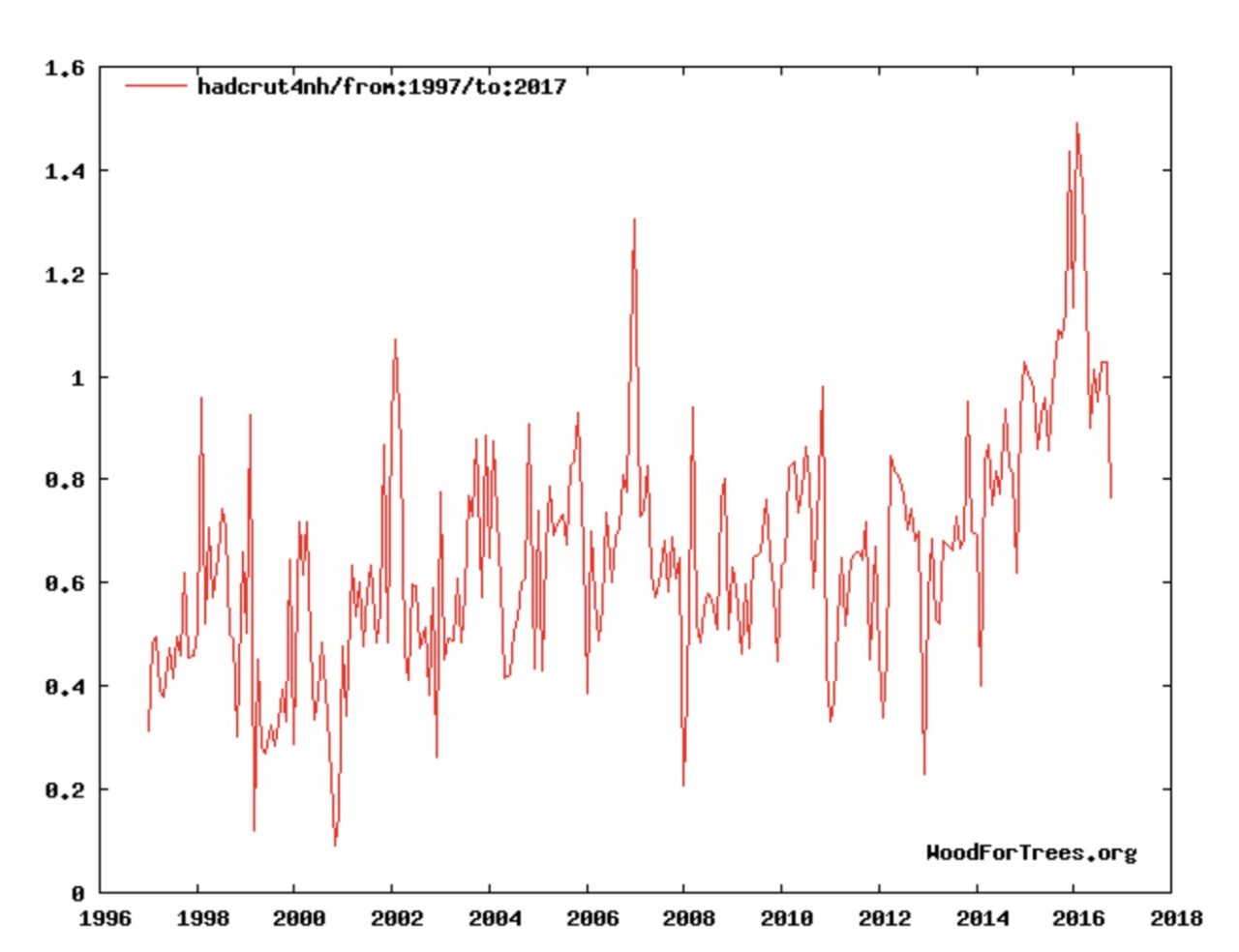 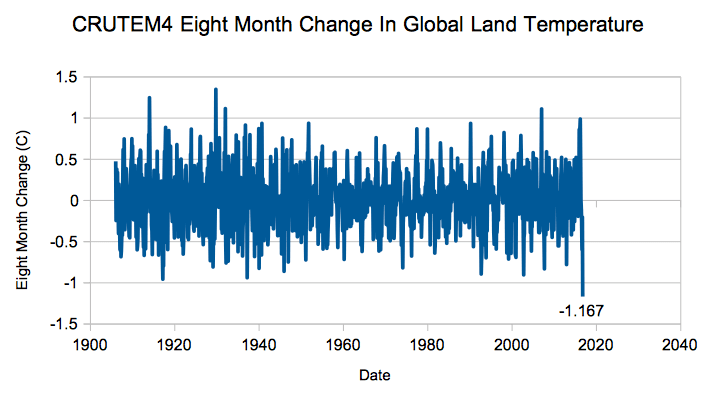 The last one shows a 1.2 C cooling over the past eight months – the largest eight-month drop in over a century.

As for the oceans, see here for further evidence that temperatures are dropping fast there, too.

[Breitbart’s] CLAIM: “It can be argued that without the El Niño (and the so-called “Pacific Blob”) 2014-2016 would not have been record warm years.” (David Whitehouse, Global Warming Policy Foundation, quoted by Breitbart)

[Parker’s alleged] TRUTH: “NOAA data show that the 2014-16 El Niño did not even begin until October 2014. It was a borderline event until mid-2015, barely above the El Niño threshold. El Niño clearly added to the strength of the record global warmth observed since late 2015. However, if the El Niño spike is removed, 2016 is still the warmest year on record and 2015 the second warmest, according to climate scientist Zeke Hausfather (Berkeley Earth).

Their graph of surface temperatures is not supported by any satellite data, which show little or no warming over land this century. Additionally, NASA has bumped up their fake land surface temperatures even further in the past couple of weeks (see below). Their data sources are not credible. 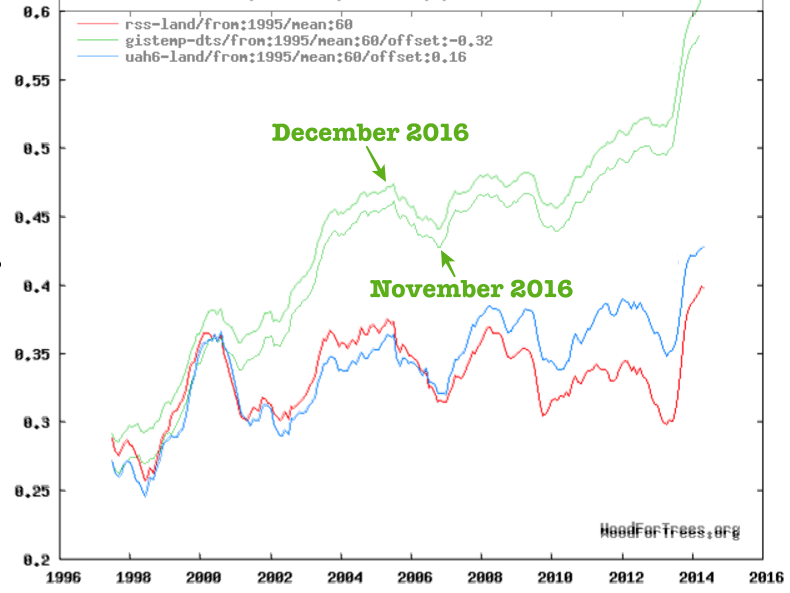 As for the attempts to draw a trendline showing that, even without El Niño and La Niña, global temperatures are warming: this is pure junk science.

You’ll find a full analysis of why this is so in this article by Dr. David Whitehouse of the Global Warming Policy Forum. It’s titled Despite Denial Global Temperatures Are Dropping Fast.

Here is a taste:

There is no way to reliably reproduce the trend observed either during the period 1979 – 1997 or 1979 – 2016 in the post 1997-data (ie half the data set) because a straight line does not represent the data over its entirety. It is obvious that a straight line doesn’t work when one examines the residuals (the difference between observed and predicted data) which are not randomly distributed. One could only obtain a positive trend by using the recent powerful El Nino to skew the trendline upwards, but that would be using a short-term effect to deduce a long-term trend which is comparing apples and oranges. Because the El Nino has risen and fallen back to pre El Nino levels it should not be part of the long term trend, as has been the case for the El Ninos of 2007 and 2010. Treat with suspicion any analysis that simply draws a straight line through this data that is raised by the temporary uptick of the latest El Nino data! Even more so if the El Nino in question is not yet fully over. If such analysis ignores the large body of evidence for the hiatus be doubly suspicious. Ponder the trend in Hadcrut4 global data after the 1998-2000 El Nino and La Ninas up to the start of the latest El Nino.

[Breitbart’s] CLAIM: “Many think that 2017 will be cooler than previous years. Myles Allen of Oxford University says that by the time of the next big United Nations climate conference, global temperatures are likely to be no warmer than the Paris COP in 2015. This would be a strange thing to happen if, as some climate scientists have claimed, recent years would have been a record even without the El Niño.” (David Rose, U.K. Daily Mail, quoted by Breitbart)

[Parker’s alleged] TRUTH: “There is nothing unusual about a drop in global surface temperatures when going from El Niño to La Niña. These ups and downs occur on top of the long-term warming trend that remains when the El Niño and La Niña signals are removed. If there were no long-term trend, then we would see global record lows occurring during the strongest La Niña events. However, the last year to see global temperatures hit a record low was 1911, and the most recent year that fell below the 20th-century average was 1976.”

As Paul Homewood notes, La Niña hasn’t even started properly yet – so we can expect to see a lot more cold to come.

The reality is that we have just gone through arguably the strongest El Nino for a century or more, and yet atmospheric temperatures have barely peaked above 1998.

If we do see a strong La Nina next year, we will see global temperatures drop further still.

One more thing. At the bottom of the Weather.com polemic there’s a picture of the Arapahoe glacier — which is apparently supposed to show how much it has retreated as a result of late twentieth century global warming.

Except it was also melting in 1910, which was NASA’s coldest year on record. 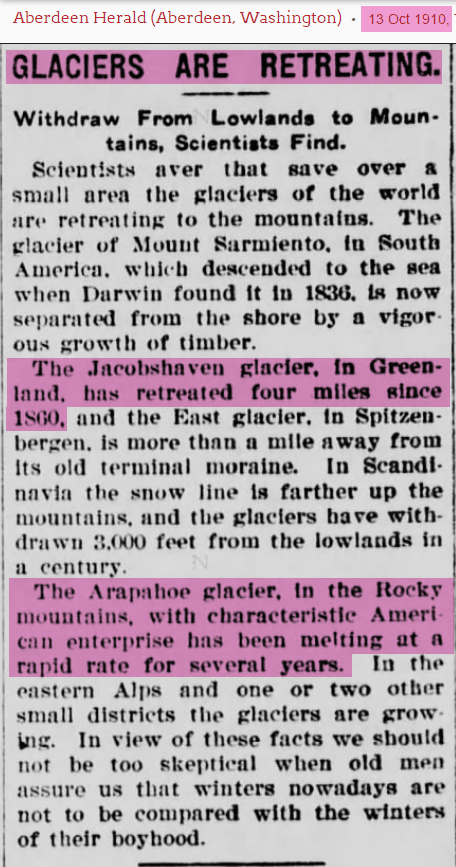 Listen to Delingpole discuss this article on Breitbart News Daily on SiriusXM: