The official RNC Christmas message released Sunday said that just as “the three wise men did on that night, this Christmas heralds a time to celebrate the good news of a new king.” Seeing the reference to a “new king,” liberals across America hit the panic button, missing the allusion to Jesus and believing that the greeting denoted President-elect Donald Trump.

As documented by The Hill, some demanded an apology for the RNC’s comparison of Donald Trump to Jesus Christ and calling him a “new king.” Another ominously reminded readers that the distinction between a president and a king “is not trivial.” Yet another accused the GOP of blasphemy and of crowning Trump “king of America.” Fortune magazine reported on similar reactions, including one that said that the RNC message “literally refers to Donald Trump as a ‘King’ and compares him to Jesus Christ.”

To a certain extent, liberals can be excused for their religious ignorance. For decades, public school-educated children have been shielded from religious Christmas carols and subjected to anodyne secular substitutes like Frosty the Snowman, Rudolph the Red-Nosed Reindeer and Jingle Bells. Otherwise, they might have recognized a common title for Jesus from the popular Christmas carol Hark, the Herald Angels, which proclaims at the end of each verse “Glory to the newborn king” as a reference to the baby Jesus, laid in the manger at Bethlehem.

The actual wording in the GOP greeting refers to a specific moment recounted in Saint Matthew’s gospel, where three wise men (or “magi”) come to Jerusalem from the east inquiring where they can find the “newborn king of the Jews.” The news of a new “king” so upsets King Herod, that he orders the extermination of all male children two years old or less, in order to eliminate a possible contender to his throne.

Since the beginning of Christianity, the followers of Jesus have referred to Him as “King of kings and Lord of lords,” and Christians the world over celebrate the annual feast of “Christ the King” on the last Sunday in the liturgical year.

The full Christmas statement of Republican National Committee (RNC) Chairman Reince Priebus and Co-Chair Sharon Day can be read below: 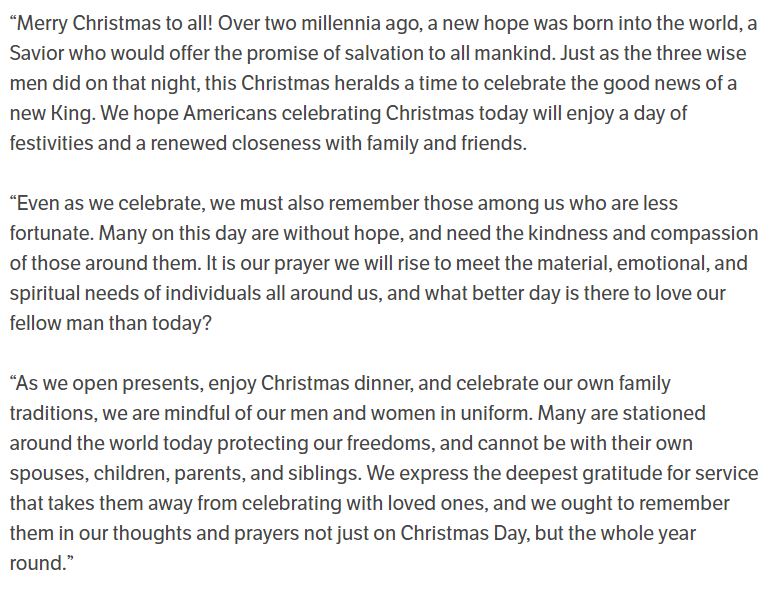