A group of witches is attempting to use black magic to neutralize U.S. President Donald Trump by casting a “binding spell” to prevent him from governing.

The “mass spell to bind Donald Trump” will be performed at midnight on every waning crescent moon beginning Friday, February 24, “until Donald Trump is removed from office,” the group’s website states.

The spell also invokes evil on “those who abet” Trump, which would seem to appear to cover his staff and political nominees, and perhaps the millions who voted for him as well. 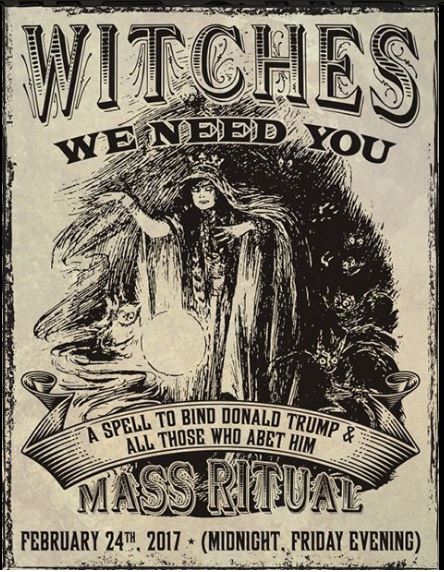 The spell involves such items as an unflattering photo of Trump, a tower tarot card, a tiny stub of an orange candle, a pin or small nail, water, salt, a feather and an ashtray.

“This binding spell is open source, and may be modified to fit your preferred spiritual practice or magical system,” the site explains. What is critical is “the simultaneity of the working” as well as “the mass energy of participants.”

“Some lodges/covens are doing a variation of this as a group working, while a number of solitary practitioners are planning to connect and livestream via Facebook, Twitter, and other social media,” the site explains.

In reaction, a number of Christian groups and individuals have promised to pray for Mr. Trump, asking God’s blessings on his work and on the nation.

We know->No weapon formed against you shall prosper .@POTUS
America’s praying for you& @VP #Pray4DJT ❤️ pic.twitter.com/eHvxrrFTtP

The witches’ spell involves a lengthy incantation, calling on spirits and “demons of the infernal realms” to bind Donald J. Trump so that “he may fail utterly, that he may do no harm.”

The climax of the spell involves a crescendo “with increasing passion” ending by blowing out the orange candle while “visualizing Trump blowing apart into dust or ash.”