“If he were standing here, he would tell you that he feels much more knowledgable on the topic today,” said Trump’s economic advisor Gary Cohn, referring to the president’s position on climate change and the Paris agreement.

Well if that’s the case, it’s certainly no thanks to Cohn – whose advice on these matters is about as sound, reliable and unbiased as that provided by Grima Wormtongue – slippery henchman of the evil wizard Saruman – to King Theoden in Lord of the Rings.

Cohn wants Trump to keep the U.S. in the Paris climate agreement. Of course, he does. As an ex-Goldman Sachs man Cohn is a fully paid up member of the $1.5 trillion-a-year Climate Industrial Complex. It was Goldman Sachs – along with Enron – which pioneered the carbon trading schemes that helped enrich enviro-troughers like Al Gore. If the global warming Ponzi scheme ever collapses – and it will – then many of Cohn’s friends and former clients stand to lose millions in crony-capitalist “investments” currently propped up by Obama-era regulation which Cohn and his cronies are desperate to keep in place.

This also explains Cohn’s extraordinary recent attack on the coal industry – “coal doesn’t even make that much sense anymore as a feedstock” – and his risibly dishonest claim that solar and wind power can help the U.S. become “a manufacturing powerhouse.”

It’s extraordinary firstly because it is in direct and explicit contradiction of Trump’s election trail promises to bring back jobs in the coal industry.

And it’s extraordinary secondly because it is in direct contradiction of observable reality, viz: there is no economic case for wind (or solar) – inefficient, expensive energy which is heavily reliant on taxpayer subsidy. For Trump’s Economic Advisor (!) to claim otherwise is at best irresponsibly misleading, at worst a flat-out lie.

Of a piece with this are Cohn’s claims about the Paris Agreement – which he has been trying to spin as a harmless, largely cosmetic diplomatic accord in which the U.S. is pretty much free to do as it chooses – either increasing or reducing its carbon reduction commitments, according to whim.

Here is how Bloomberg reported Cohn’s take on Paris.

Cohn stressed that Trump’s decision will ultimately be based on”what’s best for the United States.” He cast the agreement as flexible enough to accommodate reductions in the U.S. commitment that would keep the deal from hindering the American economy.

If this is what Cohn has been telling Trump then he has been misleading him. The Paris agreement was ALWAYS intended by its negotiators to be a one-way ticket. That is, there was never supposed to be a get-out enabling the U.S to reduce its commitments in order to ‘keep the deal from hindering the American economy.’

Here is the evidence.

A talk given to the Brookings Institute by the chief U.S, climate negotiator Todd Stern, in which he says the following about the Paris Agreement, which he describes as a “universal, lasting climate regime.” (Emphasis added in bold):

“Second of all, really important with respect to ambition. We started with the completely extraordinary fact that here were 186 countries that had put forward their targets, their so-called INDCs in the lingo, during the course of 2015. And then there was an architecture built around that in the agreement of five-year cycles to ratchet those up. And countries either put in new targets or, if they’re in the middle of a longer target period, they have to either revise it upward or reconfirm it every five years. And the five-year cycle follows a global stock-take to see where we are in the aggregate vis-à-vis our long-term goals, vis-à-vis what science is telling us. So you’ve got an every-five-year stock-take and then about a year after the every-five-year stock-take countries have to either reconfirm and say, yes, I’m going to hold where I am or I’m going to increase where I am or if they’re in the period of time where they have to put in a target anyway, obviously they do. So that was really important.”

“So in the first set of these INDCs which are going to keep ratcheting up, again we hope every five years, that there’s already been this big, big move.”

Note: this ratchet – as ratchets do – only goes one way, which is up.

Exhibit B: a briefing note to the U.S. State Department from Michael Jacobs – a high level eco advisor, formerly Climate Advisor to Prime Minister Gordon Brown – of the Global Commission on Economy and Climate, submitted in 2014 in the run-up to Paris. 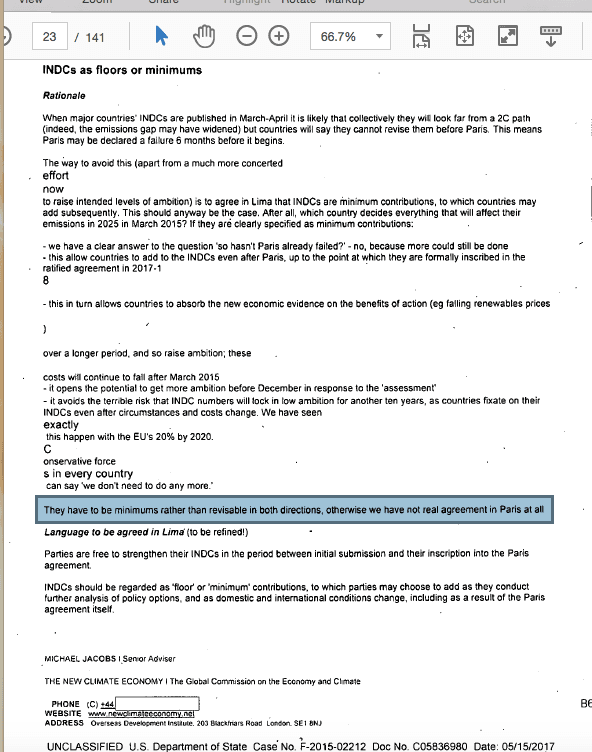 Paris – as it was clearly understood by those who wrote and negotiated it – was always a one-way ticket. Otherwise – as this document acknowledges – it would have no meaning: “Otherwise we have not real agreement in Paris at all.”

Gary Cohn too, no doubt, understands this perfectly well.

Which is yet another reason we all have cause to pray and hope that the rumors are true – and that President Trump really is going to quit the Paris climate agreement. If he does otherwise, he won’t be draining the swamp: he’ll be feeding the crocodiles and leeches.