The sun finally came out after a drenching rain storm in Pennsylvania’s Alleghany Mountain country on the first day of the work week. It marked a symbolic development for the coal miners whose future is brighter thanks to President Donald Trump’s efforts to revive an industry that the Obama administration had promised to all but abolish.

For Joey Kostya, that means he can continue a family tradition.

“My father and my grandfather before me were miners,” Kostya said after emerging from a shaft of the mine that broke ground just recently and was celebrated by Trump with Corsa Coal Corporation officials and other dignitaries overlooking the pit that reveals the rich vein of coal that runs beneath the rolling hills.

“I’m absolutely thrilled to be speaking with you on this great, great day,” Trump said via video. “The miners of Pennsylvania are mining coal again.

“Washington may be 180 miles down the road, but I want you to know each and every day, I’m fighting for you and all the forgotten men and women of America,” Trump said.

Kostya told Breitbart News that he thinks there’s a future in coal now and he’s glad to keep his job working in the mines.

“I like everything about it,” Kostya said. “It’s a fun job.”

“Something different every day so it keeps it interesting”  Kostya continued before donning his working gloves again and heading back into the mine.

“Under a tent perched hundreds of feet above a freshly dug coal pit, about 200 miners, business leaders, and politicians celebrated amid the surge of enthusiasm for the industry,” the Associated Press reported on “opening day.” 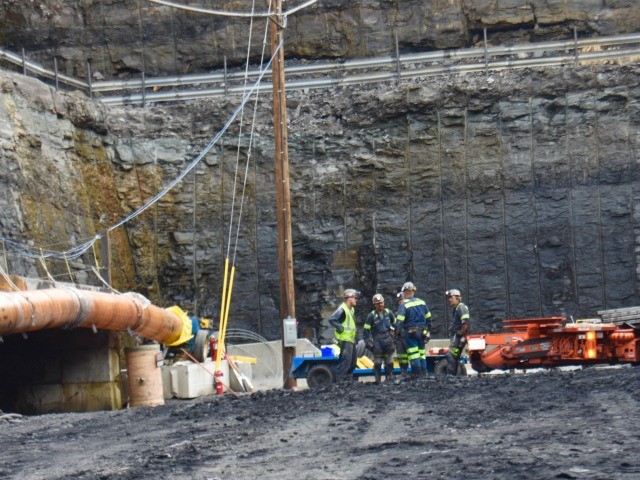 Coal miners gather outside of the mine shaft at the Acosta Deep Mine in Somerset County, Penn.

Indeed, the Acosta Deep Mine in Somerset County, Pennsylvania promises up to 100 jobs and an operation that will create countless tons of metallurgical coal, the ingredient used to make coke, the building block to produce steel — a commodity that’s builds much of what America and the world uses, from buildings and bridges to technological devices.

The mining will take place at this site over at least the next 15 years, revitalizing an area that was hard hit by the Obama energy policies.

The underground mine will eventually stretch out for miles without so much as a blade of grass being disturbed on the lush farmland that dominates the region. 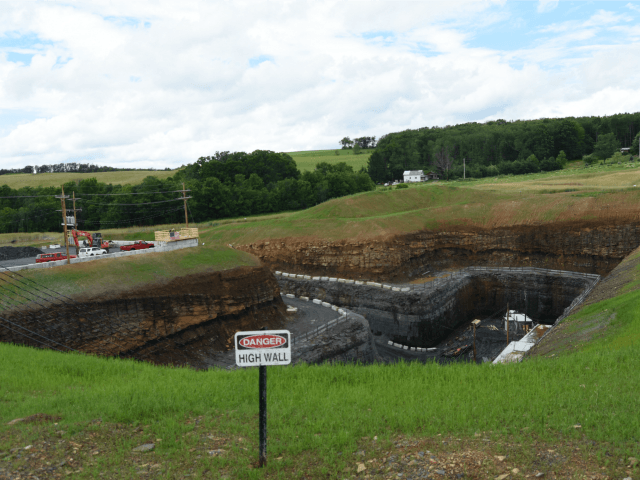 A view from above the mine shows the surrounding farmland ad a stage decorated with an American flag that was used for the mine’s opening ceremony earlier this month.

“Everyone’s excited about having a mine this big going in,” Ben Gardner, mining engineer with Corsa Coal  the company that owns it, told Breitbart News.

And the mine will not only benefit the miners and the local economy, but will have much broader economic impact felt far beyond the Keystone State, from the millions of dollars worth of high-tech equipment used in the operation, to the transportation industry necessary to deliver the coal to its domestic and global destinations.

Pennsylvania Gov. Tom Wolf, a Democrat who endorsed Hillary Clinton, said the state awarded a $3 million grant for the project.

“We have not always capitalized on our standing as one of the world’s leaders in these resources, but we’re changing that,” Wolf said at the mine’s opening.

There’s no official signage on the winding roads and picturesque farmland in this part of America, but there’s no doubt this is Trump country.

Corsa hopes to open another metallurgical coal mine next year, and another mine in 2019. 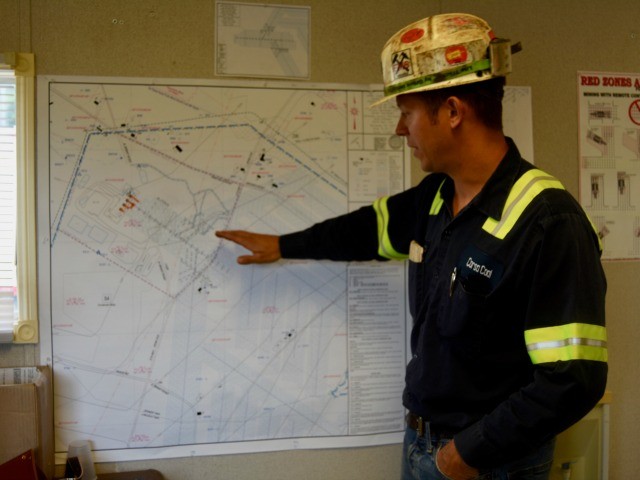 Bobby Bodenschatz, safety director at Corsa Coal Corporation, explains a map of the newly opened coal mine that will stretch for miles underground over the course of its development over the next 15 years.