Many left-wing progressive and Islamic political groups have quietly walked away from Islamic activist Linda Sarsour since her incendiary July 1 appeal for Muslims in America to declare jihad on elected President Donald Trump.

She is getting sharp-eyed criticism from experts on Islam for her call to jihad against Trump — and for her calls for Islamic self-segregation and loyalty to Allah only. But she is getting only tepid and perfunctory public support from her usual alliance of Islamic and progressive allies.

Her supporting hashtag, #IStandWithLinda, shows few tweets of support from well-known Democrats, and a growing number of critics.

Very few politicians, political donors or progressive activists have spoken up in her favor. For example, she has got no support from Bernie Sanders whom she supported throughout the 2016 election.

Few media outlets are broadcasting her novel claim that jihad actually means public criticism. The New York Times posted a gushing article in 2015 about the “Brooklyn Homegirl in a Hijab,” but has completely ignored her after the speech. HuffPo has posted just two weak op-eds defending her jihad advocacy, and Buzzfeed has not said anything since legal correspondent Chris Geidner tweeted out a defense of her without recognizing Sarsour’s multiple references to jihad in her “word of truth” phrase.

Hey you people scare-sharing Linda Sarsour's speech, read this transcription, which I just made because you all are trash misquoting her. pic.twitter.com/mzBWN6mhl9

Geidner and Sarsour did not respond to a messages from Breitbart News.

Time magazine did post an article titled “Women’s March Organizer Linda Sarsour Spoke of ‘Jihad.’ But She Wasn’t Talking About Violence.” The site didn’t accept readers’ comments and has not posted an update.

The Washington Post has not posted any reported article defending her call for jihad but did print her evasive op-ed. Yet the most-liked comment response to her op-ed in the progressive paper declared:

As an atheist, I feel confident that i am able to voice my opinion to my peers without fear of reprisal. The same can not be said if i were in a Islam majority country. The current brand of Islam is the opposite of liberalism. I don’t want anyone calling for “Jihad” or holy war on anyone. Regardless of how a person meant it. Hundreds of millions have died and science has been stomped out in the name of Jihad.

WAPO would not and should not accept editorials from David Duke. So why provide a legitimizing platform for Sarsour, who is equally hateful?

The comments show that “there is is a general cynicism about the idea that Islam is a religion of peace,” said Robert Spencer, the author of several best-selling books about Islam, and the operator of the JihadWatch.org website. The idea “is met with ridicule,” he added.

Sarsour briefly defended her jihad advocacy on her Twitter account and retweeted endorsements from fellow Islamic revivalists, such as Mohamed Elibiary, Zahra Billoo, Dahlia Mogahed, Zaki Barzinji, Hussam Ayloush and Suhaib Webb. She got some support from progressives who have allied themselves with the Islamic revivalists, such as Kai Newkirk, Mark Lamont Hill, and Deray McKesson at Black Lives Matter,

She tweeted a link to a supportive article at ThinkProgress.org.

We will define our religion on the terms of the majority of Muslims. Learn from the experts. Reading is fundamental. https://t.co/Y2YUPCM9Ym

But that pro-Sarsour article was scorched by the left-wing supporters of ThinkProgress.org. The most-liked response said:

This article is dishonest and incorrect. I am an ex muslim and can assure you that Jihad is a mandatory, offensive, violent fight against the enemies of islam a.k.a unbelievers. Its goal is to establish islam and islamic law (sharia) and to subjugate unbelievers. Financially supporting islamist groups is also accepted a jihad if you are too lazy to go kill infidels. For those who don’t believe me, read the chapter on Jihad in ‘Umdat as-Salik wa ‘Uddat an-Nasik (Reliance of the Traveler), the classic manual on Sharia…

The content of Sarsour’s speech is difficult for Americans or progressives to accept. It is neither a left-wing speech not a right-wing speech, but is instead a revivalist, fundamentalist Islamic speech, and it exposed her segregationist, theocratic and anti-modern agenda:

I hope that we, when we stand up to those who oppress our communities, that Allah accepts us from us that as a form of jihad, that we are struggling against tyrants and rulers, not only abroad in the Middle East or on the other side of the world, but here, in these United States of America…

Our number one and top priority is to protect and defend our community. It is not to assimilate and to please any other people in authority. Our obligation is to our young people, is to our women, to make sure our women are protected in our community, and our top priority, even higher than all those priorities, is to please Allah and only Allah.

Since that speech, Sarsour has not been able to retweet support from establishment Democrats because those Democrats are not supporting her in public.

The post-speech silence of her progressive allies is a strong contrast to a tsunami of soft-focus praise which Sarsour received in January for being our of four leaders in the “Women’s March” against the newly elected President Donald Trump.

Time magazine described Sarsour and her three co-leaders of the march as members of its “100 Most Influential People” for 2017. Democratic Senator Kirsten Gillibrand provided the fluff:

The Women’s March was the most inspiring and transformational moment I’ve ever witnessed in politics … it happened because four extraordinary women—Tamika Mallory, Bob Bland, Carmen Perez and Linda Sarsour—had the courage to take on something big, important and urgent, and never gave up … These women are the suffragists of our time. 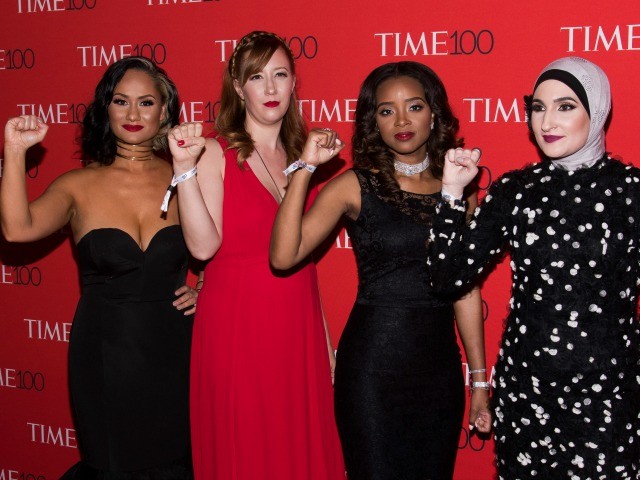 Muslim Rep. Keith Ellison, who is a co-chair of the Democratic National Committee, backed Sarsour amid criticism in April, but his Twitter feed shows no support for her since the speech.

Michael Blake, a New York Democrat and a senior member of the DNC, vociferously supported Sarsour in April, but his tweets say nothing about Sarsour since the speech.

Making it real clear. If you keep coming after @lsarsour, we're going to respond directly, consistently, with all heart & soul.
Fall back!

He posted an image of Sarsour on July 14 but did not name her.

#IMarchWithLinda because as a white person it is my duty to show up and protect our movement leaders who are threatened.

But he has only retweeted out Geidner’s tweet since Sarsour’s public devotion to jihad, segregation, and Allah.

One of her few American supporters is progressive TV commentator Van Jones, who has kept up his support for her with a July 7 and July 11 tweets:

We got your back, sister! Everyone knows these people are full of it. Keep on speaking your truth. @lsarsour https://t.co/9CNxAFOi9u

Amen, sister. Much love and respect to you. https://t.co/7EYmAAQZJC

Sarsour was one of the co-leaders in the January “Women’s March” in Washington D.C. against Donald Trump. But that organization has not tried to justify or excuse her pro-jihad speech. Instead, the group’s first response said pro-jihad Sarsour is being criticized because she’s a “leader who unites.”

Linda Sarsour is being targeted because she's a leader who unites people of all faiths and backgrounds. Join us in saying #IStandWithLinda. https://t.co/FdDtLk5fov

That’s a long drop from the enthusiastic support Sarsour got from the march movement in January.

We are proud to have @lsarsour as our co-chair. We will always have her back. #IMarchWithLinda pic.twitter.com/YyF4DEmxZ4

That evasive op-ed was also tweeted by her allies in the Justice League NYC and the National Immigration Law Center.

Sarsour attended an anti-gun march July 16 and got some publicity — and a small level of social-media support — from her allies at the poorly attended event.

Her main allies have sent out tepid supporting comments — none of which defended on mentioned the content of Sarsour’s call for segregation and jihad. For example, the ACLU justified its support by Sarsour because “she fights for civil rights and civil liberties.”

She fights for civil rights and civil liberties. Here's a profile of @lsarsour for our magazine to learn more: https://t.co/6QYWtVabw9 https://t.co/910WSxDlZM

The ACLU tweet provided a link to an August 2016 ACLU article which touted Sarsour’s alliances with progressives, but completely whitewashed her Islamic agenda, saying:

She sees her community’s struggles for equal rights as no great departure from momentous civil rights battles past and present. The outlook fuels the breadth of her activism: She works on immigration, women’s and economic issues, police accountability, and much more. And she is rigorous about showing up. After Michael Brown, a Black teenager, was shot dead by police in Ferguson, Missouri, Sarsour traveled there to join the Black Lives Matter protests…

she opens her talk by telling the crowd, “If you feel uncomfortable about what I’m saying, that’s your problem, not my problem.” She admonishes racism in the Muslim community with sloganeering (“Sisters and brothers, justice is not just us”) and religious inspiration (“If our prophet was calling for radical equality, why aren’t you?”).

Sarsour gave her speech at the annual convention of the fundamentalist group, the Islamic Society of North America. But that group distanced itself from her after equivocating for several days and offered only a weak signal of solidarity on July 8 without endorsing her incendiary – although orthodox Islamic — remarks.

ISNA’s president, Azhar Azeez said: “ISNA is proud to provide a platform for the exchange of ideas put forward by speakers such as Linda Sarsour. We appreciate Linda’s commitment to social justice and look forward to hosting her at future ISNA events.”

The Muslim Public Affairs Council is a pro-Islamist lobby but it ignored the controversy despite prior support for Sarsour. In January 2017, the MPAC group posted a favorable article saying “Linda spoke truth to power … [and] as an activist [is one of the] prime examples of American Muslim civic engagement and the valuable contributions they bring to American society. “

The twitter account of the far-left Lawyer’s Committee for Civil Rights Under Law celebrated Sarour in April.

Proud to see leaders and advocates committed to racial justice and social justice on #Time100. pic.twitter.com/yWEQU3biYC

The group was silent after her jihad speech — until Sarsour spoke at the July 15 anti-gun event.

The Southern Poverty Legal Center defended Sarsour in January but has not made a comment about the jihad-and-segregation speech.

Islamophobes have been attacking #WomensMarch organizer @lsarsour. We stand with her against this type of hate and bigotry. #IMarchWithLinda

The strongest statement in support of Sarsour came from the Council on American-Islamic Relations, a pro-Islam group that portrays itself as a civil rights group.

@lsarsour is a true American hero. She speaks truth to power. That's why she's demonized by the extremist right wing media.#IStandWithLinda

Breitbart has frequently noted that the CAIR group is so closely entwined with Islamists and with jihadis that court documents and news reports show that at least five of its people — either board members, employees or former employees — have been jailed or repatriated for various financial and terror-related offenses.

Breitbart has also published evidence highlighted by critics showing that CAIR was named an unindicted co-conspirator in a Texas-based criminal effort to deliver $12 million to the Jew-hating HAMAS jihad group, that CAIR was founded with $490,000 from HAMAS, and that the FBI bans top-level meetings with CAIR officials. “ In 2009, a federal judge concluded that “the government has produced ample evidence to establish the associations of CAIR… with Hamas.” CAIR has been declared a terrorist organization by the United Arab Emirates and was named by federal prosecutors as an unindicted co-conspirator in a Hamas-funding operation.

Breitbart reporters have been pushed out of CAIR press conferences several times. The group defends its record here.

Despite the loss of support and visibility,  Sarsour was invited to give a  sideshow speech at a hip-hop concern in her Brooklyn hometown. 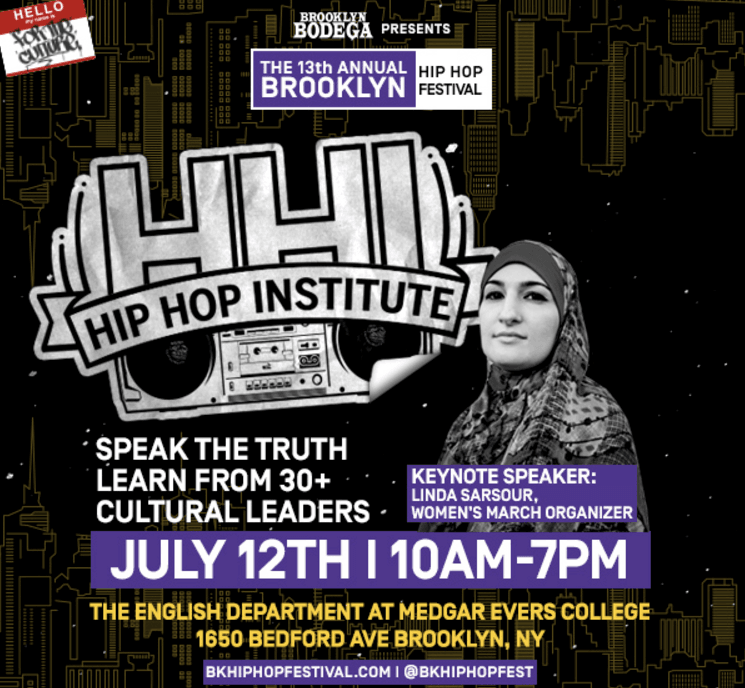