Here are some of its extraordinary achievements:

Thanks to fracking the U.S. has become the world’s largest producer (and consumer) of natural gas.

According to the International Energy Agency’s latest report:

The United States – the world’s largest gas consumer and producer – will account for 40% of the world’s extra gas production to 2022 thanks to the remarkable growth in its domestic shale industry. By 2022, US production will be 890 bcm, or more than a fifth of global gas output. Production from the Marcellus, one of the world’s largest fields, will increase by 45% between 2016 and 2022, even at current low price levels, as producers increase efficiency and produce more gas with fewer rigs.

While US domestic demand for gas is growing, thanks to higher consumption from the industrial sector, more than half of the production increase will be used for liquefied natural gas (LNG) for export. By 2022, the IEA estimates that the United States will be on course to challenge Australia and Qatar for global leadership among LNG exporters.

For four years the U.S. has produced more oil than its nearest petroleum rival Saudi Arabia.

No. 1 "Saudi America" Has Out-Produced No. 2 Saudi Arabia for Total Petroleum Supply for the Last 4+ Years pic.twitter.com/Di98hvzpKe 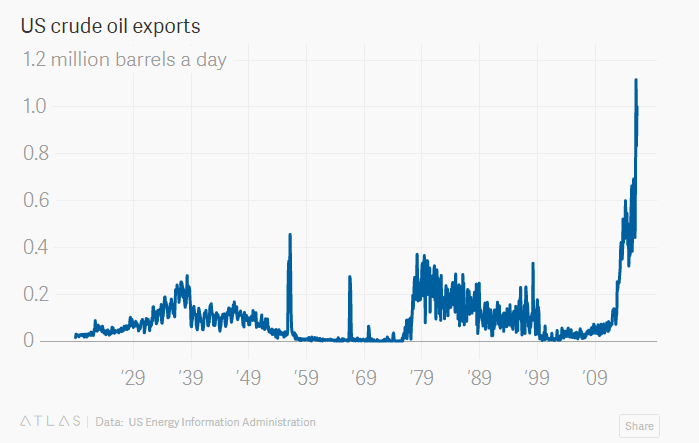 Trump — as he promised — has helped save the U.S. coal industry. Just look at what has happened to coal exports in the first quarter of 2017. They’re up 58 per cent on the same period last year, back in the dread era of Obama — the guy who wanted to make fossil fuels so expensive that electricity would “necessarily skyrocket.” 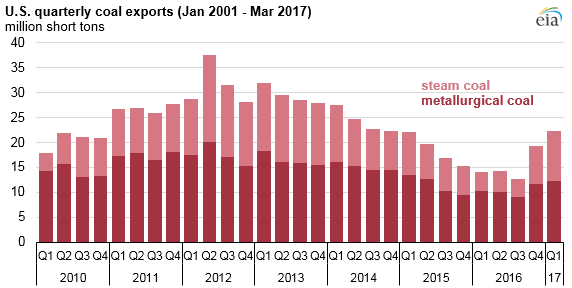 Who is buying this stuff? People you wouldn’t necessarily expect: half of it goes to Europe which, despite the “clean energy” targets imposed on it by the EU dictatorship, evidently cannot survive on solar and bat-chomping, bird-slicing eco-crucifixes alone.

America has moved far beyond energy independence. It is now achieving energy dominance.

All this is, of course, very good news if you’re lucky enough to be American.

And very bad news if, like me, you’re not, because increasingly we’re going to find ourselves in a world of two halves: winners and losers.

On the winning side, there will be the half that follows the American model and embraces the cheap, abundant energy provided by fossil fuel. This includes China and India who, for all their green posturing to gullible Westerners, don’t really believe in renewables.

On the losing side, there will be the half — including, currently, Canada, Australia, Britain and most of Continental Europe — which continues to insist on making obeisance to the Climate Fairy. And which, therefore, remains wedded to the kind of renewable energy schemes which are causing the indigent to die in fuel poverty, which are ruining industry, and which are driving up the cost of living to no practical purpose whatsoever.

South Australia is probably the most desperate victim of the great green energy disaster.

But even that once mighty economic powerhouse Germany is looking pretty feeble after its disastrous embrace of Energiewende, as the WSJ has noted:

Ms. Merkel’s climate and energy policies have caused residential electricity prices in Germany to spike by approximately 47% since 2006, costing the average German household about $380 more a year. The higher prices are largely due to a 10-fold increase in renewable-energy surcharges that guarantee returns for the wind and solar-power industries. These surcharges now make up 23% of German residential electric bills.”

Meanwhile in Britain, the government has announced a range of green schemes, including a plan to ban all non-electric cars by 2040. Apart from making little scientific or economic sense, this silly exercise in green virtue-signalling has already failed in its only plausible purpose: to buy off the overmighty environmental lobby. Here’s the Guardian‘s take:

Yup. Pay Danegeld to the Dane and it doesn’t make him go away. He just keeps coming back for more…