A top EPA official has resigned, supposedly in protest at the direction the Agency has taken under President Trump.

Or — as we climate realists prefer to put it — #winning.

Elizabeth “Betsy” Southerland had worked at the EPA for thirty years. But on Tuesday she resigned from her post as director of science and technology in the Office of Water, claiming “the environmental field is suffering from the temporary triumph of myth over truth.”

Just what incredibly good news Southerland’s departure is can be best be appreciated by reading her farewell letter.

It’s supposed to be her Parthian shot — a damning indictment of the decline of a once-great institution under the wicked Donald Trump and his sinister henchman, EPA Administrator Scott Pruitt.

But, actually, it tells you rather more about the weird, reality-denying mindset which prevails among the inhabitants of the swamp which Trump is busily trying to drain.

By what definition of “truth” is any of this true?

No war on coal?

But that’s exactly what Obama launched in 2008 when he said:

If somebody wants to build a coal-fired power plant, they can. It’s just that it will bankrupt them.

And very successful he was too as this chart from the Energy Information Administration shows: 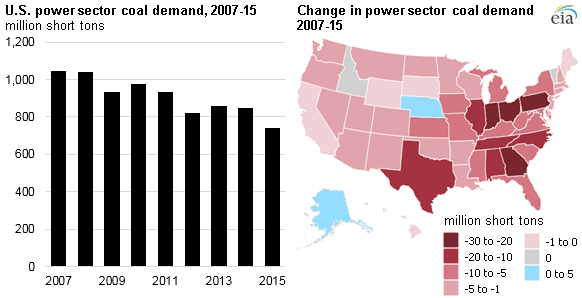 Only under President Trump has the coal industry begun to recover. But this can’t be what Southerland is talking about when she claims there is “No war on coal.”

Complying with EPA regulations costs the U.S. economy $353 billion per year — more than 30 times its budget — according to the best available estimate. By way of comparison, that is more than the entire 2011 national GDPs of Denmark ($332 billion) and Thailand ($345 billion).

We know that the annual cost of the global warming industry is — at a conservative estimate — $1.5 trillion.

You could buy a lot of hospitals — or reduce a lot of taxes or national debt — for $1.5 trillion.

What are the taxpayers who pay this $1.5 trillion — and, yes, it does all come from taxpayers, energy users, etc. in the form of mandated subsidies, levies, and so on — getting in return for their investment?

Why, only the possibility that the planet’s increase in global warming may be reduced, by the end of the century, by 0.048°C (0.086°F). That’s about the same temperature reduction you experience when you travel a couple of stories down in an elevator.

Perhaps that’s not, strictly an economic crisis. Just the biggest conspiracy to defraud the taxpayer in the history of the universe.

This is not a scientific statement backed by credible evidence. It’s an affirmation of religious belief. But what Southerland appears not to appreciate is that she’s not actually a High Priestess in the Temple of Gaia. She’s a public servant whose job is to administer whatever the government of the day tells her to do. The fact that she imagines otherwise speaks volumes about the scale of the arrogance and bureaucratic overreach which President Trump is currently in the business of trying to combat.

It may take a few years and even an environmental disaster, but I am confident that Congress and the courts will eventually restore all the environmental protections repealed by this administration…