Most global warming is natural and even if there had been no Industrial Revolution current global temperatures would be almost exactly the same as they are now, a study has found.

The paper, by Australian scientists John Abbot and Jennifer Marohasy, published in GeoResJ uses the latest big data technique to analyse six 2,000 year-long proxy temperature series from different geographic regions. “Proxies” are the markers scientists use – tree rings, sediments, pollen, etc – to try assess global temperature trends in the days before the existence of thermometers. All the evidence suggests that the planet was about a degree warmer during the Medieval Warming Period than it is now; and that there is nothing unnatural or unprecedented about late 20th century and early 21st century “climate change”.

This contradicts the claims of alarmist scientists at the Intergovernmental Panel on Climate Change that “man made” global warming is a worrying and dangerous phenomenon.

Time-series profiles derived from temperature proxies such as tree rings can provide information about past climate. Signal analysis was undertaken of six such datasets, and the resulting component sine waves used as input to an artificial neural network (ANN), a form of machine learning. By optimizing spectral features of the component sine waves, such as periodicity, amplitude and phase, the original temperature profiles were approximately simulated for the late Holocene period to 1830 CE. The ANN models were then used to generate projections of temperatures through the 20th century. The largest deviation between the ANN projections and measured temperatures for six geographically distinct regions was approximately 0.2 °C, and from this an Equilibrium Climate Sensitivity (ECS) of approximately 0.6 °C was estimated. This is considerably less than estimates from the General Circulation Models (GCMs) used by the Intergovernmental Panel on Climate Change (IPCC), and similar to estimates from spectroscopic methods.

In fact as the chart shows, recent warming is well within the planet’s natural historic climate boundaries: 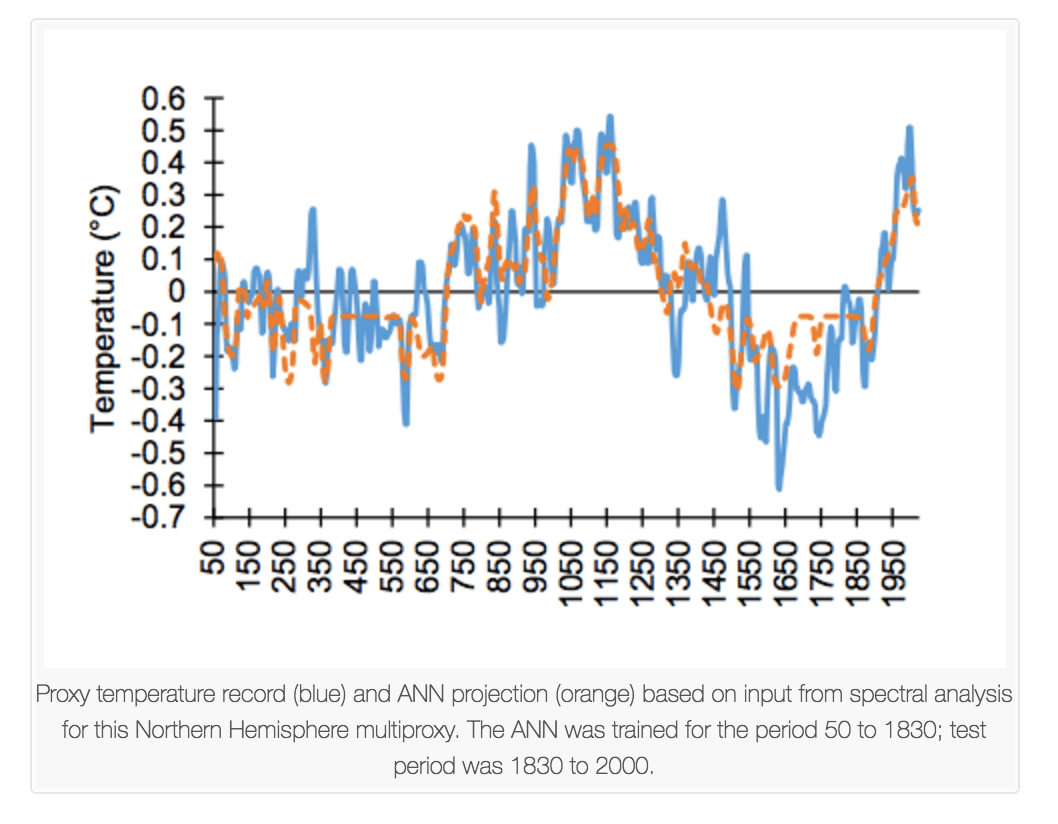 According to co-author Jennifer Mahorasy – who was behind the recent exposure of the scandal in which Australia’s Bureau of Meteorology was found to be erasing record-breaking low temperatures from its records – global temperature has moved up and down quite naturally for the last 2000 years.

We began by deconstructing the six-proxy series from different geographic regions – series already published in the mainstream climate science literature.  One of these, the Northern Hemisphere composite series begins in 50 AD, ends in the year 2000, and is derived from studies of pollen, lake sediments, stalagmites and boreholes.

Typical of most such temperature series, it zigzags up and down while showing two rising trends: the first peaks about 1200 AD and corresponds with a period known as the Medieval Warm Period (MWP), while the second peaks in 1980 and then shows decline. In between, is the Little Ice Age (LIA), which according to the Northern Hemisphere composite bottomed-out in 1650 AD.  (Of course, the MWP corresponded with a period of generally good harvests in England – when men dressed in tunics and built grand cathedrals with tall spires.  It preceded the LIA when there was famine and the Great Plague of London.)

Up until the 1990s, this was widely accepted by the climate science community. But then came a concerted effort led by alarmists including Michael “Hockey Stick” Mann to erase the Medieval Warming Period from the records. Scientists who argued otherwise – among them Willie Soon and Sallie Balliunas – were harassed for their “incorrect” thinking.

However, the new study would appear to confirm that the skeptics were right all along – and that it’s the alarmists who have some apologizing to do.

To be clear, while mainstream climate science is replete with published proxy temperature studies showing that temperatures have cycled up and down over the last 2,000 years – spiking during the Medieval Warm Period and then again recently to about 1980 as shown in Figure 12 – the official IPCC reconstructions (which underpin the Paris Accord) deny such cycles.  Through this denial, leaders from within this much-revered community can claim that there is something unusual about current temperatures: that we have catastrophic global warming from industrialisation.

In our new paper in GeoResJ, we not only use the latest techniques in big data to show that there would very likely have been significant warming to at least 1980 in the absence of industrialisation, we also calculate an Equilibrium Climate Sensitivity (ECS) of 0.6°C. This is the temperature increase expected from a doubling of carbon dioxide concentrations in the atmosphere. This is an order of magnitude less than estimates from General Circulation Models, but in accordance from values generated from experimental spectroscopic studies, and other approaches reported in the scientific literature [9,10,11,12,13,14].

The science is far from settled. In reality, some of the data is ‘problematic’, the underlying physical mechanisms are complex and poorly understood, the literature voluminous, and new alternative techniques (such as our method using ANNs) can give very different answers to those derived from General Circulation Models and remodelled proxy-temperature series.