All week some of the very worst people in climate activism have been trying to make political mileage out of Hurricane Harvey.

They range from the inevitable Naomi Klein…

NOW IS EXACTLY the time to talk about climate change, and all the other systemic injustices — from racial profiling to economic austerity — that turn disasters like Harvey into human catastrophes.

…and the inevitable Michael “Hide the Decline” Mann…

Two words that @realDonaldTrump or @FEMA_Brock has 100% failed to use in this crisis – climate change. You cannot hide from it!

The USA must rejoin the #ParisAgreement and recognize climate change as our nation's #1 threat to national security. https://t.co/oXy7KIbeOr

What all these blowhard charlatans have in common is that they are all talking drivel. They are, as the EPA rightly says, attempting “to politicize an ongoing tragedy.”

So why do they do it? Because for climate alarmists every major weather event – especially ones that cause millions of dollars of damage to property and claim human lives – is never really a disaster or even a crisis but a heaven-sent opportunity to promote their alarmist narrative.

It’s what Klein, Mann, Kerry Emmanuel of MIT, Stefan Rahmstorf of the Potsdam Institute, Eric Holthaus,  have been doing all this week with their “climate change kinda sorta caused Hurricane Harvey” claims. They know that almost no one among the readership of the left-wing publications for which they write is going to question their (fake) science because what they’re saying accords with one of the main tenets of the green religion: everything that goes wrong with the weather must be man’s fault – but most especially it’s the fault of Donald Trump for pulling out of the Paris Climate Agreement.

Meanwhile, one last time, here’s a reality check courtesy of actual weather data recorded by proper scientists from the days when scientists did actual science.

First, Hurricane Harvey is remarkable precisely because it is such a rare event. It comes at the end of a prolonged hurricane drought:

Second, the intensity of the rainfall was caused by the coincidence of two meteorological anomalies, neither of which is the result of “climate change”. They are, as former NASA scientist Roy Spencer notes:

1) A strong tropical cyclone, with access to abundant moisture evaporated off the Gulf of Mexico, and

2) Little movement by the cyclone.

As he explains in more detail here, this is most definitely a chance occurrence not a climate change event.

Third, the claim that climate change/global warming is responsible – as the alarmists keep telling us – for more flooding, more rainfall is an absolute and total lie.

Here, with the evidence, is the trusty Paul Homewood.

Check out this chart of record US rainfall: 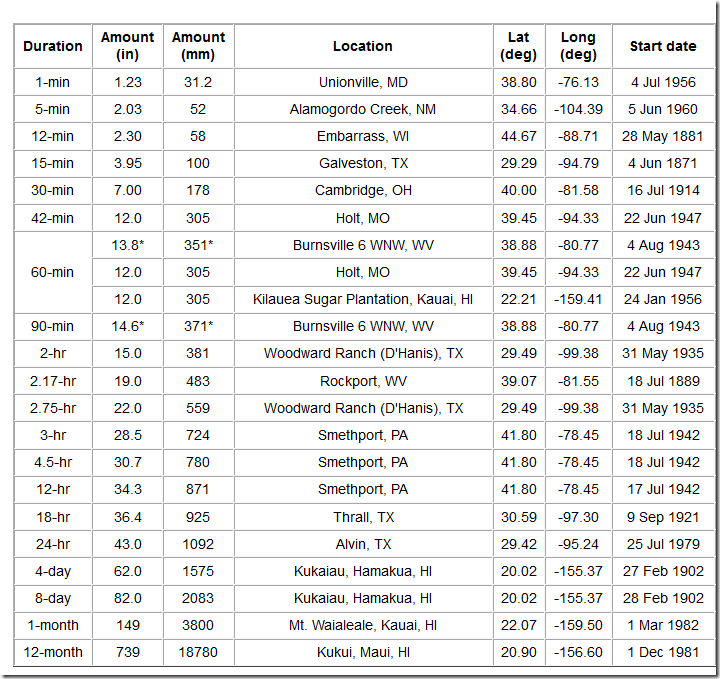 Note that none at all has occurred since 1981.

Take particular note of the four records in Texas:

Storm Harvey never got anywhere near these sort of totals.

The same, Homewood goes on to demonstrate, is true of the global rainfall record. (Just in case any alarmists want to play the “never mind the US, what about Bangladesh” game). Even the most recent rainfall record was set as long ago as 1980.

Fourth, and finally, of course Houston is going to be prone to flooding. Always has been. Again, we must thank Paul Homewood for pointing out what ought to be obvious with any understanding of local history. Here is what Harris County Flood Control District’s website has to say:

Flooded from the Beginning

When the Allen brothers founded Houston in 1836, they established the town at the confluence of Buffalo and White Oak Bayous. Shortly thereafter, every structure in the new settlement flooded. Early settlers documented that after heavy rains, their wagon trips west through the prairie involved days of walking through knee-deep water.

Harris County suffered through 16 major floods from 1836 to 1936, some of which crested at more than 40 feet, turning downtown Houston streets into raging rivers. After the tremendously destructive floods of 1929 and 1935, however, citizens clamoured for solutions. Estimated property damage in 1929 was $1.4 million, a staggering sum at the time. Losses more than doubled in 1935, when seven people were killed and the Port of Houston was crippled for months – its docks submerged, its channel clogged with tons of mud and wreckage, its railroad tracks uprooted. Twenty-five blocks of the downtown business district were inundated, as well as 100 residential blocks. If ever there was a county in need of flood assistance, this was it.

Hang your heads in shame, warmists. History, science and climate are NOT on your side.