Only 37 percent of U.S. 12th graders were prepared for college-level coursework in mathematics and reading in 2016, but many public school districts have become fixated on the latest progressive trend of “social and emotional learning.”

There is little to boast about when it comes to the state of U.S. education.

As Breitbart News reported in April of 2016, only about 37 percent of U.S. 12th graders are prepared for math and reading at the college level, according to the 2015 National Assessment of Educational Progress (NAEP) – also known as the Nation’s Report Card.

A recent report also found that U.S. high school students are earning more A’s in the classroom, but declining in scores on the SAT achievement test – a clear sign of artificial grade inflation, say experts.

In addition, results of the 2015 Trends in International Math and Science Study (TIMSS) and the Program in International Student Assessment (PIS) found American students showing, at best, mediocre performance in math, science, and reading.

“Taking PISA and TIMSS together, the news isn’t great, especially considering that we spend more on K-12 education than almost any other country in the world,” wrote Cato’s education director Neal McCluskey.

Nevertheless, school districts, worked into a frenzy by the federal government and the tech-ed industry, have become orgasmic about social and emotional learning (SEL) – how to measure it, teach it, and produce the kind of child any government or Chamber of Commerce could love.

How do we measure social and emotional learning? https://t.co/POFb5XwLfT pic.twitter.com/en1vi99fcB

Social-emotional learning emphasizes the personal and relational skills researchers and employers say students need to succeed both inside and outside the classroom, skills like social awareness and self-management. Measurements that track how students are performing in these areas would help schools decide if their approaches and programs are successful, educators say, and some policymakers have pushed for more precise measurements that might allow for the inclusion of so-called non-cognitive skills in states’ school accountability models.

This collection of psychological SEL data is encouraged by the federal government in the new Every Student Succeeds Act (ESSA), which promotes the measurement of some “non-academic” accountability measures.

This trend is bolstered by the recent fed-ed bill, the Every Student Succeeds Act, which encourages schools to include such non-academic measures in their accountability ratings. It’s bad enough that the feds demand accountability – which should be to parents, not federal or state bureaucrats – but it’s even worse that they dictate how that accountability should look. So much for the bi-partisan propaganda that ESSA ended federal education mandates.

Pediatrician Dr. Karen Effrem is president of Education Liberty Watch and executive director of the Florida Stop Common Core Coalition. In a column at the National Pulse, she observes that organizations such as the National Association of State Boards of Education and the American School Counselors Association openly acknowledge that a primary purpose of the Common Core State Standards is “to mold and profile students’ attitudes, beliefs and behavior — through what’s called social emotional learning (SEL) or ‘21st Century Skills.’”

“The Every Student Succeeds Act requires other factors besides student achievement in their mandated accountability plan, which is a wide gateway for social emotional assessment and data collection,” Effrem tells Breitbart News. “State (Common Core) Assessments and The National Assessment of Educational Progress (NAEP) – also known as The Nation’s Report Card – are already starting to include mindset and school climate questions either as surveys or as part of the tests themselves.”

Ironically, U.S. Education Secretary Betsy DeVos has said that ESSA “essentially does away with the whole argument about Common Core,” even though, according to Education Week, “at least 37 states” were still using the Common Core standards or its “rebrands” as of the end of last year.

How does social -emotional learning benefit the economy? https://t.co/ZyCOcQyWuT

With the federal government promoting non-academic measures of success, test and tech-ed companies have seized the opportunity.

In May, Natasha Singer wrote at the New York Times that tech giant Google – with its plethora of Chromebooks and free classroom apps – is “helping to drive a philosophical change in public education – prioritizing training children in skills like teamwork and problem-solving while de-emphasizing the teaching of traditional academic knowledge, like math formulas.”

“It puts Google, and the tech economy, at the center of one of the great debates that has raged in American education for more than a century: whether the purpose of public schools is to turn out knowledgeable citizens or skilled workers,” Singer added.

Colorado parent Cheri Kiesecker says Big Data has been given free rein under the guises of both “personalized learning programs” and workforce development, with both Democratic and Republican lawmakers on board with the program.

“There is no evidence that these online ‘personalized’ programs accurately measure or predict,” Kiesecker tells Breitbart News. “In fact we see quite the opposite. Algorithms are often biased and wrong. So why are we pushing online learning in classrooms? Data is money.”

How is social-emotional learning embedded in our teaching every day? ⬅️ Today's professional development theme

Other test and tech-ed companies want in on the windfall.

The ACT college readiness test, for example, just announced the launch of ACT Tessera – which it describes as “a comprehensive next-generation assessment system designed to measure social and emotional learning (SEL) skills.”

ACT says the new system is geared for middle and high school students and will provide both “actionable” lesson plans for teachers to use in their classrooms as well as matching assessments.

“A growing number of research studies—including ACT’s own research—have confirmed that SEL skills, sometimes known as behavioral or noncognitive skills, are essential for success in education and career,” the testing company states.

Middle and high school students will therefore be taught and then assessed in six psychological areas, according to ACT:

CASEL depicts a graph of the “SEL Core Competencies”: 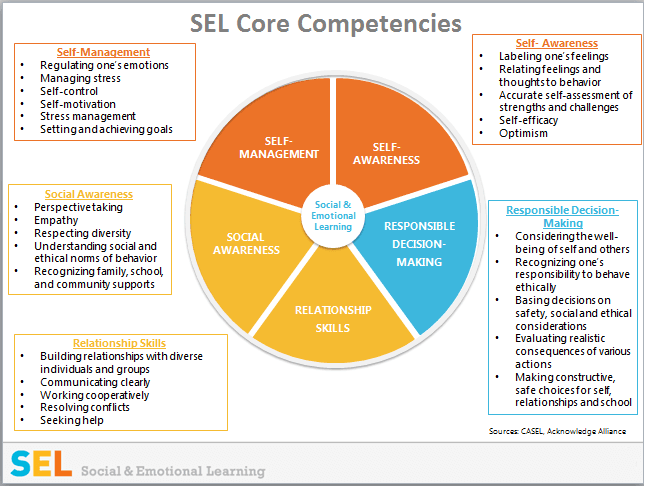 “As more programs are being taken up in schools and districts, there becomes this greater demand to assess them, to see if they’re working, to see if students are, in fact, learning the skills that are being taught,” Lindsay Read, manager of research at CASEL, told the Hechinger Report, adding that there is a great need for tests that can be administered and scored quickly in classrooms.

The MeasuringSEL Design Challenge winners for 2017 included Northwest Evaluation Association and the Santa Ana Unified School District. According to the Hechinger Report, this first-place design “makes use of metadata collected when students take other computer-based tests.”

“It assesses self-regulation and self-management based on how long students spend on each test question, effectively combining a measure of social-emotional learning with existing standardized tests,” the report continues, affirming that when students are taking computer-based tests in math and reading, their psychological attitudes and traits are also being measured and evaluated.

The second-place CASEL MeasuringSEL design was called Social Detective and measures “students’ ability to assess other people’s values, interests and perspectives based on video clips of them,” says the Hechinger Report, explaining:

In Social Detective, students watch video clips of people answering questions like “What makes a good friend?” and then they describe the person in their own words, answering multiple-choice questions like “What is more important to this person, loyalty or honesty?” In the assessment itself, students can practice social perspective-taking. They get immediate feedback about how their answers match the answers of the people who appeared in the videos. A full assessment includes 15 minutes of watching a video, answering questions, getting feedback and repeating the exercise at least three times.

Below is a video about one of the third-place CASEL SEL design challenge winners – PERC – which is a “computer-based tool that assesses students’ Persistence, Effort, Resilience, and Challenge-seeking behavior”:

“Educrats and their ed-tech cronies seem to assume that because they think it’s a good idea, they have the right to decide that each child should undergo it – without even telling parents what’s happening,” she says.

“Parents, investigate whether your schools are implementing government-sponsored personality manipulation. If so, reassert your right to protect your children from such dangerous experimentation,” Robbins adds. “Schools must treat students as students, not patients.”