A manager at the Democratic National Committee reportedly tried to hide job opportunities from normal men, marking a possible act of discrimination by a transgender-boosting manager against men.

“I personally would prefer that you not forward [the job notices] to cisgender straight white males, since they’re already in the majority,” said the leaked memo from Madeline Leader, the data services manager at the DNC.

The “Cisgender” term refers to normal people, and it was invented to justify the claim that some people can switch sex because they are “transgender.” For example, progressives argue that a man trying to live as a woman is actually a “transgender woman,” and a normal woman living life as a woman is merely “cisgender.” 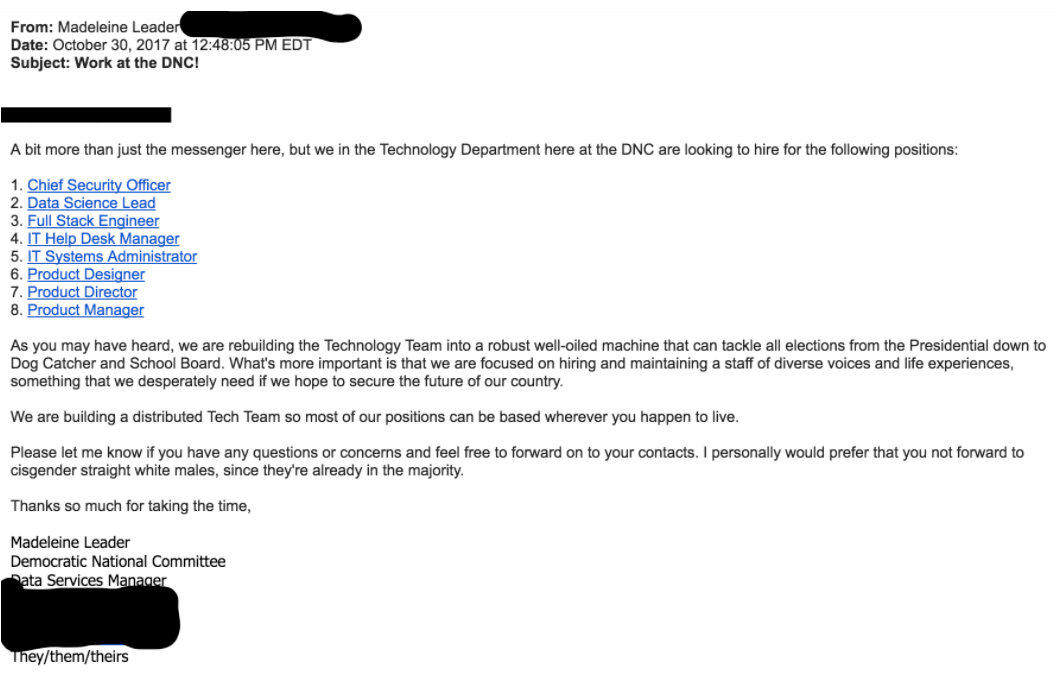 The DNC request also excludes people who are white and people who are not homosexual. Leader apparently wanted the hiring panel to exclude the 95 percent of men who neither “transgender” nor gay.

The memo shows that Leader apparently included the phrase “they/them/theirs.” The terminology is often used by people wishing to blur the sexual distinction created by the standard binary pronouns of “she” and “he.” It is often used by “transgender” people who are trying to live as members of the opposite sex.

The e-mail was unveiled by the Daily Wire, which also posted a comment from an anonymous DNC staffer:

Clearly the DNC is doubling down on a failed strategy that has alienated staffers and voters alike. We want to be judged based on the quality of our work, not on identity politics. How can we trust the leadership of the DNC if they don’t even trust us?

Leader did not ask for the exclusion of people because of their nationalities, such as American or Irish, so there is no evidence of illegal national-origin discrimination in the memo.

The DNC did not respond to a request for comment.

The transgender terminology is confusing, partly because even the term “gender” was invented to help sexual radicals argue that a person’s biological sex should have no impact on laws and social practices, such as single-sex athletics or single-sex showers. Progressives argue that each person has a gender which may be different from their biological sex and that if a man has the “gender identity” of a woman, the federal government must ensure that other Americans treat him as a woman.