The number of migrants displaced each year from their homes has been due overwhelmingly to climate disasters rather than armed conflict, according to the newly released World Immigration Report for 2018.

“Each year since 2008, an average of 25.3 million people have been newly displaced by disasters,” stated the report, which is published by the International Organization for Migration (IOM). “This is far greater than the average for conflict and violence, and reflects the indiscriminate, unpredictable and uncontrollable nature of certain hazards.”

Although the report makes several vague references to “climate change,” it prudently confines its discussion of the causes behind forced migration to actual climate disasters, such as floods, tornados and the like, rather than wading into the murky and uncharted waters of global warming.

With unusual circumspection, the report states: “The shortage of quantitative data on movements associated with environmental change, including climate change… represents a key gap.”

“The multicausal nature of such movements presents particular challenges,” the report carefully continues. “Evidence on long-term trends associated with disasters, such as duration of displacement and subsequent movements and trajectories, is also scarce. These gaps have been recognized and efforts are under way to innovate and overcome these barriers.” 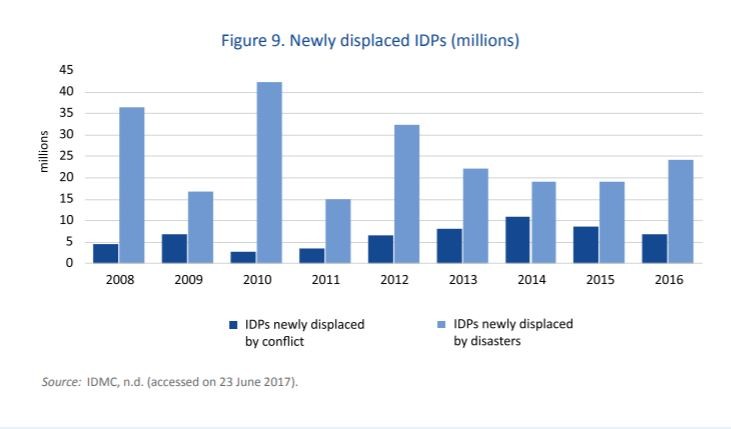 In 2016, the report continues, disasters triggered by climate, weather-related and geophysical hazards accounted for a total of 24.2 million displaced persons worldwide.

“As in previous years, the 24.2 million total, while a little less than the running average, far outnumbers new displacements associated with conflicts and violence,” the report concludes.

Nonetheless, the report states, “a significant portion of the global total of those newly displaced by disasters is usually associated with short-term evacuations in a relatively safe and orderly manner.”

This suggests that a significant number of persons displaced by weather-related events eventually return home and do not join the ranks of the permanently displaced.

The careful, fact-based analysis offered by the IOM in its 2018 report, especially as regards the complexity and multicausal nature of climate change, stands as a welcome contrast to other such reports, which hastily attribute migratory flows, as well as specific environmental phenomena themselves, to anthropogenic climate change.