WASHINGTON, DC – Rep. Steve King (R-IA) tells Breitbart News that history—in particular, the dismantling of German’s Berlin Wall which signified the end of Communism in that country—should serve as a guide for the Iranian people protesting to take back their country.

“I would encourage the Iranian people to take an inspiration from those who have achieved their freedom,” King told Breitbart News. “And, certainly, it’s the Germans and the people who lived on the other side of the Iron Curtain.”

King held up a piece of the Berlin Wall taken from the Communist side on September 12, 1990, that he keeps in his office. In addition to being taken out of the wall on his late father’s last birthday, King said that piece of the Berlin Wall “represents the single most significant event in my lifetime: when the Iron Curtain came crashing down. And this is a physical component of that Iron Curtain,” he said. 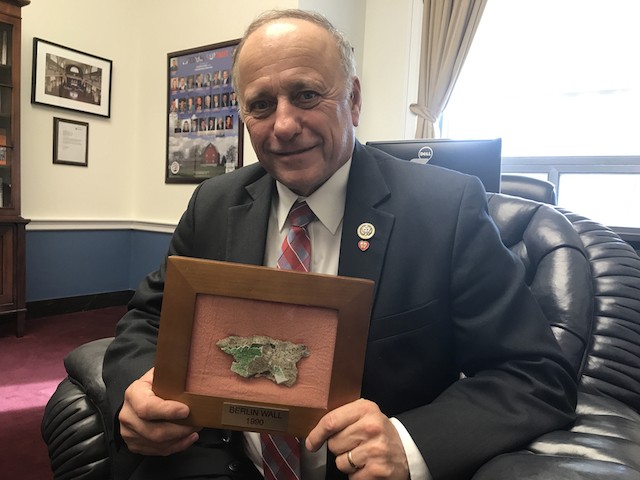 “Once the people come to the streets and come to the town or city square to call for their country back … that they can have a country that’s ruled by, we say, ‘We The People’—of, by, and for the people of Iran. Once you leave the square, you’ve lost your country.” He added, “It’s hard to go back to the square again. It takes years to gin up the support to do that again. So I encourage the Iranian people to stay in the streets.”

On Tuesday, King spoke at a panel discussion on Iran featuring Amb. John Bolton, where he listed several incidents throughout history where people living under various dictatorial and fascist regimes were unable to gain freedom due to lack of support from the United States, and other incidents where freedom rang because the people persisted.

“When John F. Kennedy denied the air cover for the Bay of Pigs, the revolution there failed,” King told those gathered. “And the people of Cuba have lived under that kind of suppressed marxism ever since 1959.”

He also mentioned 1992, when the Kurds thought they would have U.S. support as Saddam Hussein gassed them to death.

He recalled how, in 1968, “the tanks rolled in there and pushed the people out of Prague.” Then how he stood in the very spot on Tiananmen Square in Beijing where one brave man faced down a Chinese tank on June 1, 1989. “And they rolled the tanks in there and they suppressed the revolution or we might have seen the end of at least a militaristic Marxism in the world if they had succeeded in Tiananmen Square.”

King said, “I went there to stand in that very spot where that man stared that tank down because I was so inspired by his actions. And I’ve gone to different places around the world just to be on the soil where people love freedom.”

During the mid-1950s, “When the Russians rolled their tanks into places like Budapest and Prague, they suppressed the revolution there,” King said. “And the people lived under that Marxism until 1989 and 1990.”

One of the most striking examples of resistance, King recalled, occurred in 1990 when the Czechs stood in the streets of Prague, holding their keys up and rattling them, refusing to leave. “And they got their country back. And it was essentially a peaceful revolution there.”

“I’ve talked to people who have lived on the east side of the [Berlin] Wall under communism. And they said, when they could finally go into the west and see all this beauty all of this technology, they told me, ‘we bought every bright color we could get for clothes. We bought yellow and green and orange and we wore them around proudly because we finally could.'” He added, “The drab world they lived in before was black and white and they walked into a full world of technicolor.”

He said religious freedom, and the ability to worship as people choose, is also part of that equation the Iranian people are striving for.

So far, at least 22 Iranian protesters have been killed. Many have also come out against the regime by burning their Basij forces ID cards. The Basij Forces is a volunteer paramilitary group that is one of five forces operating under Iran’s Islamic Revolutionary Guard Corps (IRGC).

“We get to live that here in the United States: religious freedom, freedom of speech, freedom of the press, assembly, the right to keep and bear arms,” King said. He concluded by saying, “The pillars of American exceptionalism are very well laid out; most of them within the Bill of Rights in our Constitution. That’s the freedom I’d love to see for the Iranian people.”