The thousands of people who took part in the March for Our Lives protest along Pennsylvania Avenue in Washington, DC, on Saturday carried signs revealing their anti-gun, anti-Trump, and pro-left wing agenda.

The event was launched by students at the Parkland, Florida high school where 17 people were shot and killed last month by a former student with a long history of mental health issues and run-ins with law enforcement. But in a matter of days, left wing and gun control groups hijacked the march and transformed it into a turn out-the-liberal-vote rally.

“Vote them out!” people chanted on stage and on the ground, as young people took to the podium to demand Congress pass laws to ban certain guns and restrict gun purchases. 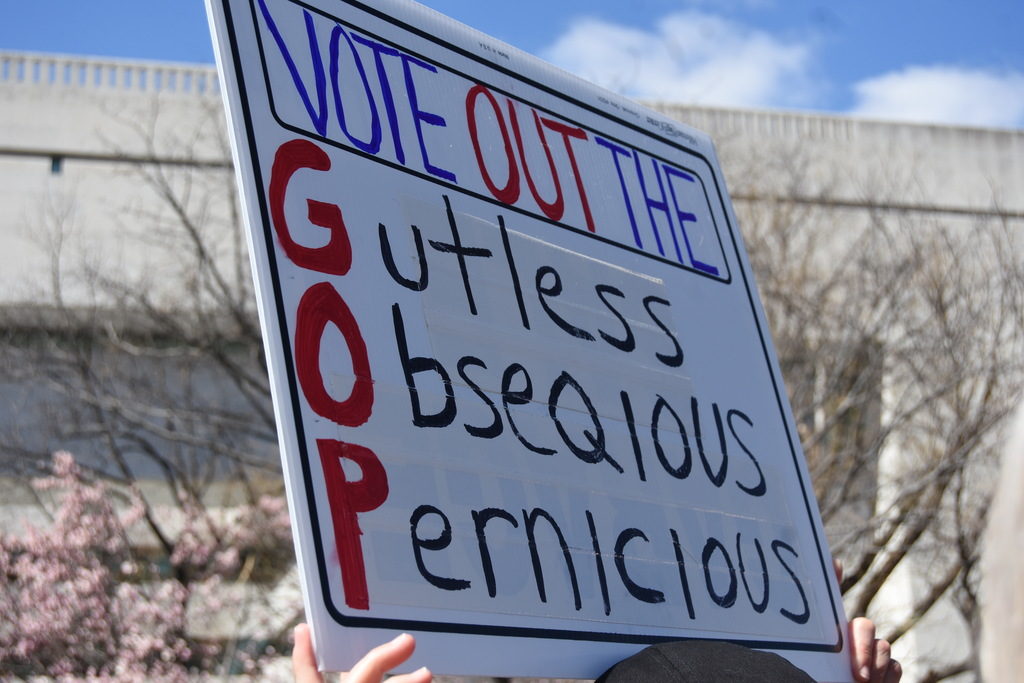 One sign at the March for Our Lives event in Washington, DC, on Saturday, called for voting out the GOP. (Penny Starr/Breitbart News)

The groups involved in organizing, promoting, and funding the March for Our Lives include the anti-gun Giffords – an organization started by former Rep. Gabrielle Giffords (D-AZ) – Moms Demand Action for Gun Sense in America, Move On, the Women’s March, and Planned Parenthood. 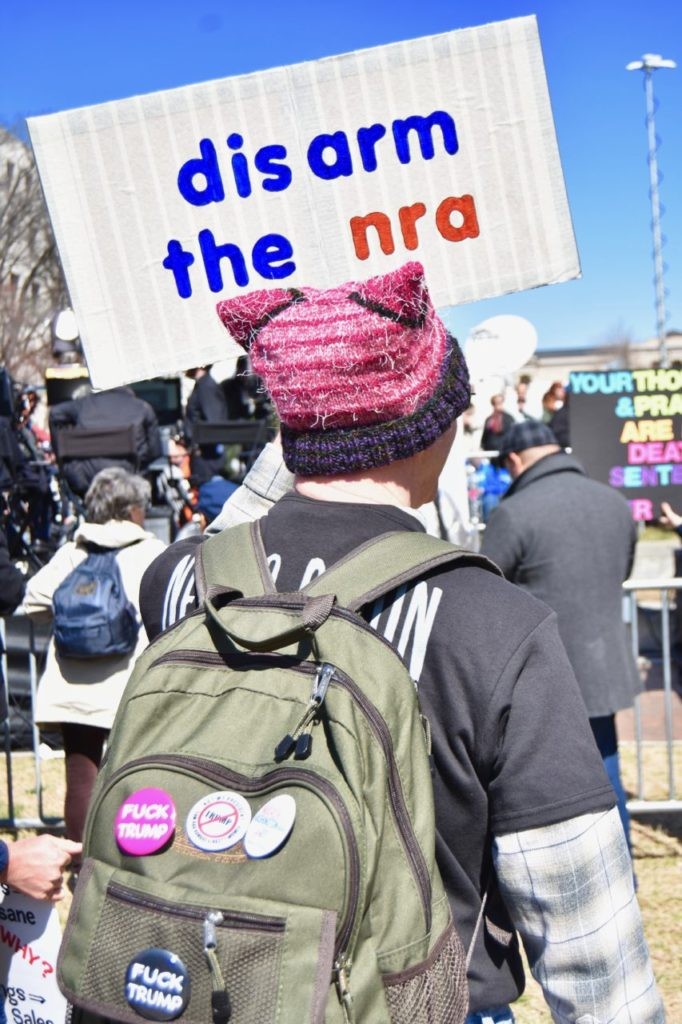 A participant at the March for Our Lives event in Washington, DC, on Saturday, carries an anti-NRA sign and a backpack with F**k Trump buttons. (Penny Starr/Breitbart News)

“Disarm the NRA,” one sign read. “How many kids have you killed today NRA,” said another.

One man carried an effigy of the president with the label “liar” pinned on his shirt. 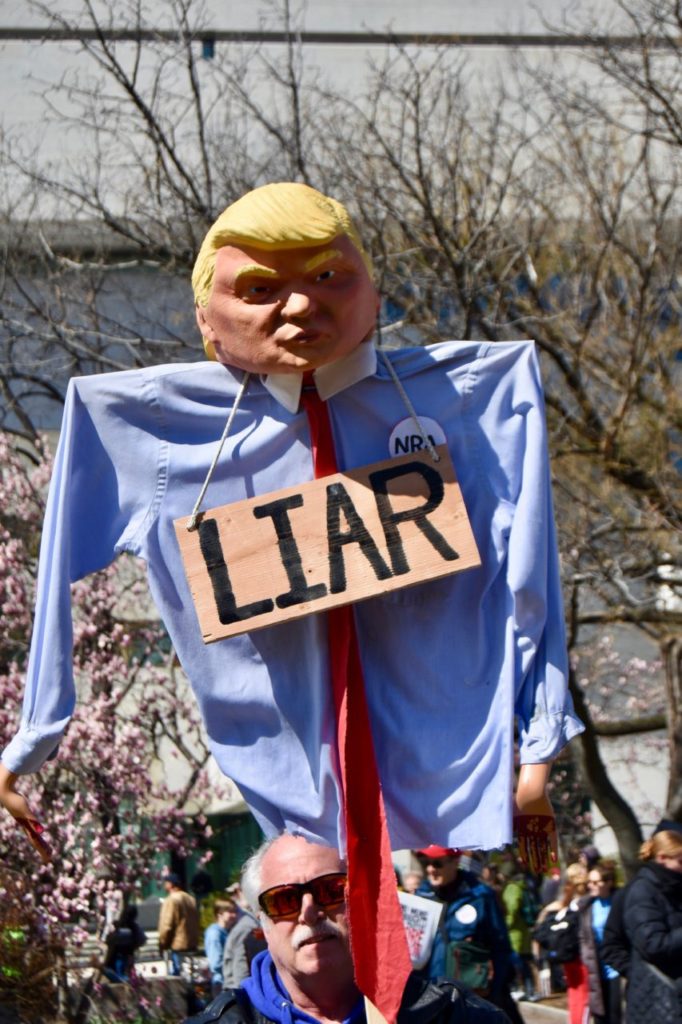 One man had an effigy of President Donald Trump at the March for Our Lives event in Washington, DC, on Saturday. (Penny Starr/Breitbart News)

Two high school students from Pennsylvania told Breitbart News that a Second Amendment guaranteeing the right for American citizens to keep and bear arms would not be necessary if there were no guns in the United States.

Pussy hats and other relics from the anti-Trump Women’s March were prevalent in the crowd, at least half of which was made up of older people rather than the teens said to be the impetus behind the protest.

One woman registering voters told Breitbart News that 500 volunteers were in the crowd on Saturday to sign up protesters.

As Breitbart News reported, BuzzFeed News spoke to some of the groups supporting the march:

A spokesperson for Giffords told BuzzFeed News that it is “lending support in any way the students need, especially helping to operationalize these marches from logistics to programming.”

“We applaud these students for demonstrating incredible leadership and demanding that our lawmakers do more to help protect Americans from gun violence,” the Giffords spokesperson said in the BuzzFeed News report.

Planned Parenthood and the George Soros-funded Move On are also in the mix of left-wing groups behind the march.

BuzzFeed News reported, “MoveOn said it will encourage its millions of members to follow and promote the March for Our Lives movement on social media and attend the rally” and would help with security and other logistics.

A spokesperson for Planned Parenthood said it is “teaching and hosting trainings” for teens “to keep momentum going so they don’t get burned out,” BuzzFeed News reported.

As Breitbart News reported, Cameron Kasky, 17, acknowledged that the anti-Trump group Indivisible helped with the march and said that their assistance is necessary because of the role race allegedly plays in school shootings. Kasky said in an interview on Friday with National Public Radio:

You know our story was told because we are an affluent white community and we have to shine the spotlight that was given on us on everybody in the world that has to deal with this on a daily basis. So people like Indivisible, who represent students who are in lower-income communities and don’t get to speak out the way we do because people don’t listen — we have to connect with these students.

The National Park Service does not provide crowd estimates, but it released a permit filed for the event that planned on 500,000 people.

View of March for Our Lives protest from several blocks away from main stage pic.twitter.com/4IuS7tfTtZ

The crowd was protected by a massive force of heavily armed D.C. Metropolitan Police and Capitol Police. 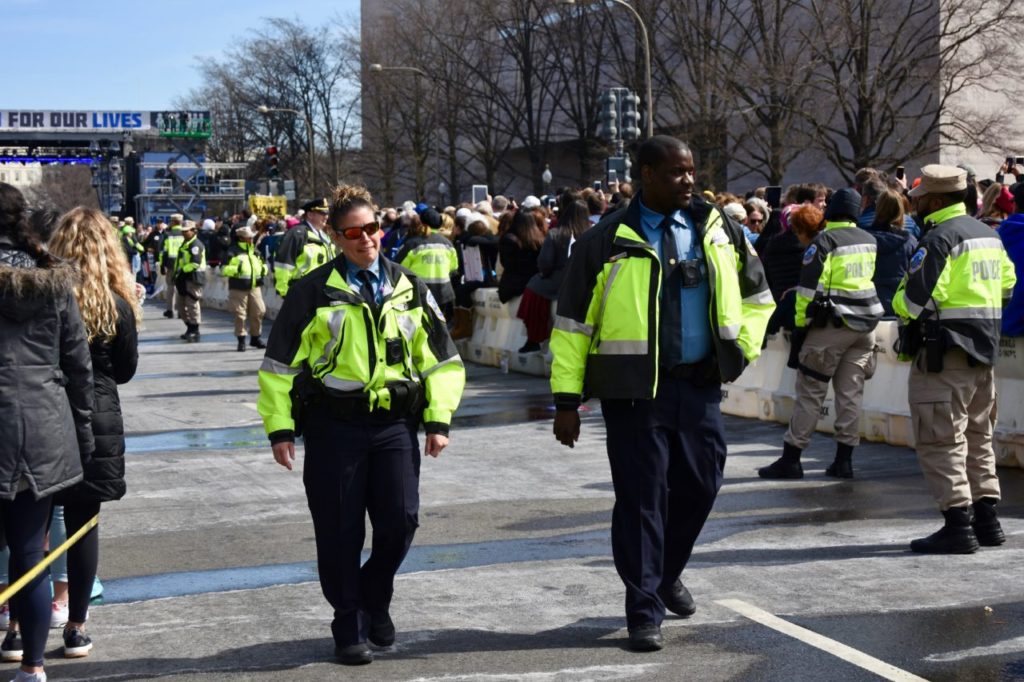 The crowd at the March for Our Lives event in Washington, DC, on Saturday, was protected by a heavy police presence. (Penny Starr/Breitbart News)

Celebrities like Miley Cyrus and Demi Lovato, who performed at the event, and Kim Kardashian and Kanye West, who also attended, were surrounded by armed security at the march.

A small contingent from Gunowners of America was on hand at the march with posters pointing out the hypocrisy of some Hollywood celebrities and their support of the march, including George Clooney, who donated $500,000 to the event while starring in movies featuring gratuitous violence involving guns.