The “White Death” opioid crisis is caused by illegal drugs like heroin and fentanyl, not by legal painkillers, and it exploded because President Barack Obama unleashed a migrant crisis in his second term, according to a new understanding of the plague.

That is the core argument made by Daniel Horowitz at Conservative Review. He explains how data from Centers for Disease Control shows prescription painkiller usage has plummeted at a remarkable rate since 2012, even as the opioid epidemic became a red-hot front-page crisis. In fact, some of the states with the worst rates of drug-related death since 2012 also display the steepest declines in prescription rates. Horowitz contends:

Rather than a steady decline in fatalities from overdoses to match the decline in prescription opioids, everything went bonkers from 2013 to the present, after the public and politicians turned against the use of prescription opioids. We saw a spike in deaths of unfathomable proportions, getting worse every year through 2014, 2015, and 2016. The level of fatalities doubled and tripled in those states as, not surprisingly, heroin and fentanyl flooded the market.

Horowitz blames this squarely on President Barack Obama’s careful sabotage of border security and internal immigration law enforcement, which opened the floodgates for drug smugglers to wage what he describes as “chemical warfare” against the United States.

The current crisis kicked into overdrive after painkiller prescriptions began declining, but it tracks very closely with Obama’s amnesty programs and the surge of young migrants that poured over the southern border. 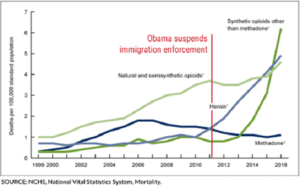 The key points of this argument are that Obama’s migrants generated huge profits from human smuggling operations, which financed improved drug production, which was distributed via the new illegals welcomed by Obama. Horowitz points to the rise of the MS-13 gang and its well-documented ties to the major drug cartels as an example of financial and human capital pouring over the southern border during Obama’s second term.

He adds a provocative theory that the prescription painkiller theory of the opioid crisis reverses the actual cause-and-effect relationship at play: the opioid crisis got worse after painkiller prescriptions went down because people who wanted to get high could no longer do it with pills, so they turned to the newly-enhanced street networks for heroin and fentanyl.

Fentanyl is the demon that crops up again and again as law enforcement officials and medical professionals talk about the opioid crisis. It’s a synthetic compound vastly stronger than heroin, a fact the New Hampshire State Police Forensic Laboratory illustrates with a side-by-side photo comparing lethal doses of the two drugs: 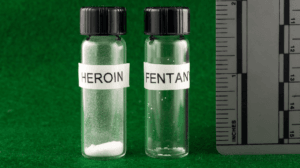 One reason fentanyl is such a big problem is that drug dealers mix it with cocaine and heroin to juice up their potency, often without informing their customers. The mixtures are made with crude equipment and often use low-quality fentanyl compounds, effectively turning every drug fix into a game of Russian roulette.

The CDC reports that over half of the overdose deaths reported from the hardest-hit states last year involved fentanyl. One disturbing new trend involves college students using what they believe is cocaine to stay awake, only to learn to their sorrow that they have been snorting fentanyl. The Associated Press revealed on Monday that music legend Prince had an “exceedingly high” concentration of fentanyl in his body at the time of his death.

A large percentage of the deaths reported as opioid or cocaine overdoses are actually caused by fentanyl or the even more dangerous carfentanil, an elephant tranquilizer that is growing more popular as the special sauce in drug mixtures. Carfentanil is so dangerous to humans that its dealers are effectively serial killers.

In a report on fentanyl published Thursday, NPR interviewed police, medical professionals, and drug users who proposed a sinister theory that is very consistent with Horowitz’s charges of chemical warfare: “They speculate that cartel leaders are using cocaine to expand the market of people addicted to opioids.”

In other words, the cartels are deliberately poisoning Americans with fentanyl because it’s even more addictive than cocaine and heroin. Even experts skeptical of this theory, on the grounds that fentanyl kills repeat business by killing off the customers, admitted that the amount of fentanyl turning up in cocaine is so large that it suggests deliberate intent on the part of dealers – it’s just too much to explain away as accidental contamination from sloppy packaging.

“Fentanyl has drastically changed the landscape,” DEA Special Agent Patrick Trainor of Philadelphia told the UK Guardian in December. “Sixty-four percent of fatals in Philadelphia County are fentanyl-related. There’s no dope out here now, it’s all fentanyl. Even the old timers are scared of it.”

Trainor also addressed skepticism that drug dealers would deliberately poison their customers with deadly substances like fentanyl: “There’s no greater endorsement for a trafficker than when his product kills somebody. That’s not mythology. We see it all the time. We’ve had wiretaps of drug traffickers bragging how many people their drugs killed.”

The Guardian noted that fentanyl-related deaths have surged 540 percent over the last three years, and accounted for “nearly all the increases in drug overdose deaths from 2015 to 2016,” according to the Journal of the American Medical Association.

On Tuesday, the DEA announced charges against Francisco Quiroz-Zamora for “flooding the New York City area with large quantities of fentanyl from Mexico,” as the Associated Press put it.

“According to U.S. authorities, Quiroz-Zamora, who lived in San Jose del Cabo in Baja, had the drugs smuggled by cars, trucks, and couriers over the border into Arizona and California before the supplies reached the New York City area,” the AP reported.

Quiroz-Zamora’s operation, based out of the same building used in exterior shots to represent Elaine’s apartment in the popular TV show Seinfeld, is said to have imported enough fentanyl to kill ten million people.

“This investigation provides the American public with an inside view of a day in the life of a Sinaloa Cartel drug trafficker; including international travel, money pick-ups, and clandestine meetings,” said DEA Special Agent-in-Charge James Hunt. “Quiroz-Zamora oversaw the delivery of multi-kilogram loads of fentanyl to New York, powerful enough to kill millions.”