The signs are that it could be one of the weakest in centuries, potentially ushering in the most serious bout of global cooling since the 17th century’s Maunder Minimum.

You might think the climate alarmists would be happy about this: after all, what better antidote to the horrors of “global warming” than a bracing dose of global cooling?

Instead, they are trying to divert attention by reviving one of their favorite old scare stories: the one about how ‘climate change’ is causing the Gulf Stream to alter its course, just like in The Day After Tomorrow.

This latest version of the scare story originated in the alarmist journal Nature and was then amplified by the Germany’s Potsdam Institute for Climate Impact, ground zero for the most extreme form of pseudo-scientific climate alarmism.

The Atlantic overturning – one of Earth’s most important heat transport systems, pumping warm water northwards and cold water southwards – is weaker today than any time before in more than 1000 years. Sea surface temperature data analysis provides new evidence that this major ocean circulation has slowed down by roughly 15 percent since the middle of the 20th century, according to a study published in the highly renowned journal Nature by an international team of scientists. Human-made climate change is a prime suspect for these worrying observations.

This in turn prompted the usual suspects in the alarmist media to ramp up the scaremongering still further.

The Gulf Stream myth has been dispelled on several occasions. By a NASA study in 2010 (“…data suggest the circulation may have even sped up slightly in the recent past…”; by a paper in Geophysical Research Letters in 2013 (“In contrast to recent claims of a Gulf Stream slowdown, two decades of directly measured velocity across the current show no evidence of a decrease”); most recently by MIT’s Carl Wunsch: “assertions of weakening are conceivable, but unsupported by any data.”

You might think that nobody paid much attention to this Day After Tomorrow scaremongering drivel, but unfortunately people do. Only the other day I was grumbling about the unseasonally cold weather to a non-lunatic friend who explained to me to that it was all the fault of the Gulf Stream and worse was to come. Apparently, she’d heard this on the authority of the BBC.

There isn’t much disputing the cold weather some of us are having.

The U.S. Midwest, for example, is experiencing its coldest Spring on record. (As Tony Heller tartly notes this was “22 degrees colder than the Spring of 1910 when CO2 was 300 PPM”) 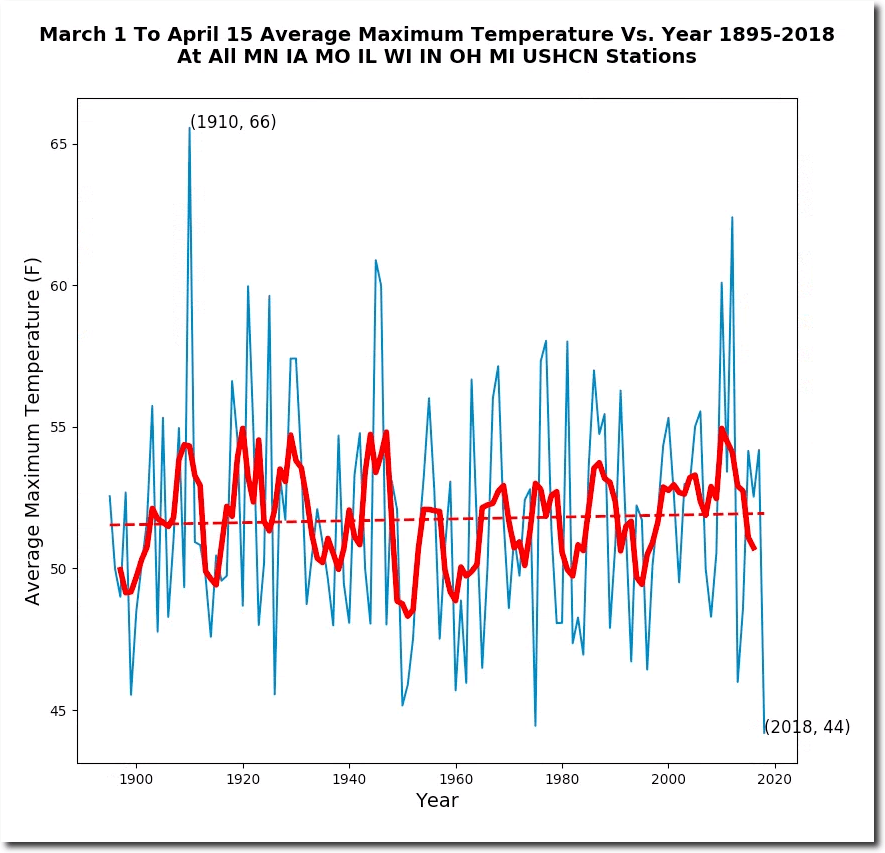 What no one can agree on is the cause. Really it depends who you trust.

a) the alarmists who have previously insisted on no evidence that the world is overheating catastrophically due to man-made global warming, but are now shifting their position yet again on account of the fact that climate isn’t doing what their computer models predicted it would do.

b) the scientists who note that there has been a clear historical correlation between periods of low sunspot activity (Maunder Minimum; Dalton Minimum) and periods of global cooling.

As the Global Warming Policy Foundation’s Benny Peiser says, these are very interesting times for the climate debate.

We are in the process of moving into the biggest scientific experiment of all time. We are approaching a solar minimum which we can observe. We can see how solar activity is declining. And we now have two competing theories that have made predictions as to what impact the solar minimum, never mind a grand solar minimum if it where to happen, will have on the climate. We have the conventional IPCC consensus which suggests that it will have a negligible influence and that the next 20 years will see a warming of somewhere between 0.4 and 0.6 degree Celsius. And we have the alternative theory that suggests that solar inactivity will have a dampening effect on global temperatures. This would mean that in the next 20 years the warming trend will either be much smaller or will return almost back to Pause conditions, where we see hardly any warming. So we now have a big test in front of us.

My money’s on the people who have been proved right all along so far. You?