Democratic and female lawmakers are trying to widen the border’s catch and release loopholes by portraying women and children as the most pitiable victims of President Donald Trump’s immigration policies.

“This administration is clearly decided that they’re going to attack women, children, and their families,” said Sen. Kamala Harris (D-CA) at a Thursday press event. “The government should be in the business of keeping families together not tearing families apart.”

“My office is flooded with stories of moms who are literally screaming as their children are ripped from their arms,” said Reps. Pramila Jayapal, (D-WA). “When the attorney general says he’s going to institute a new policy at the border that literally tears children from their mothers we know that it is shameful,” Jayapal said. 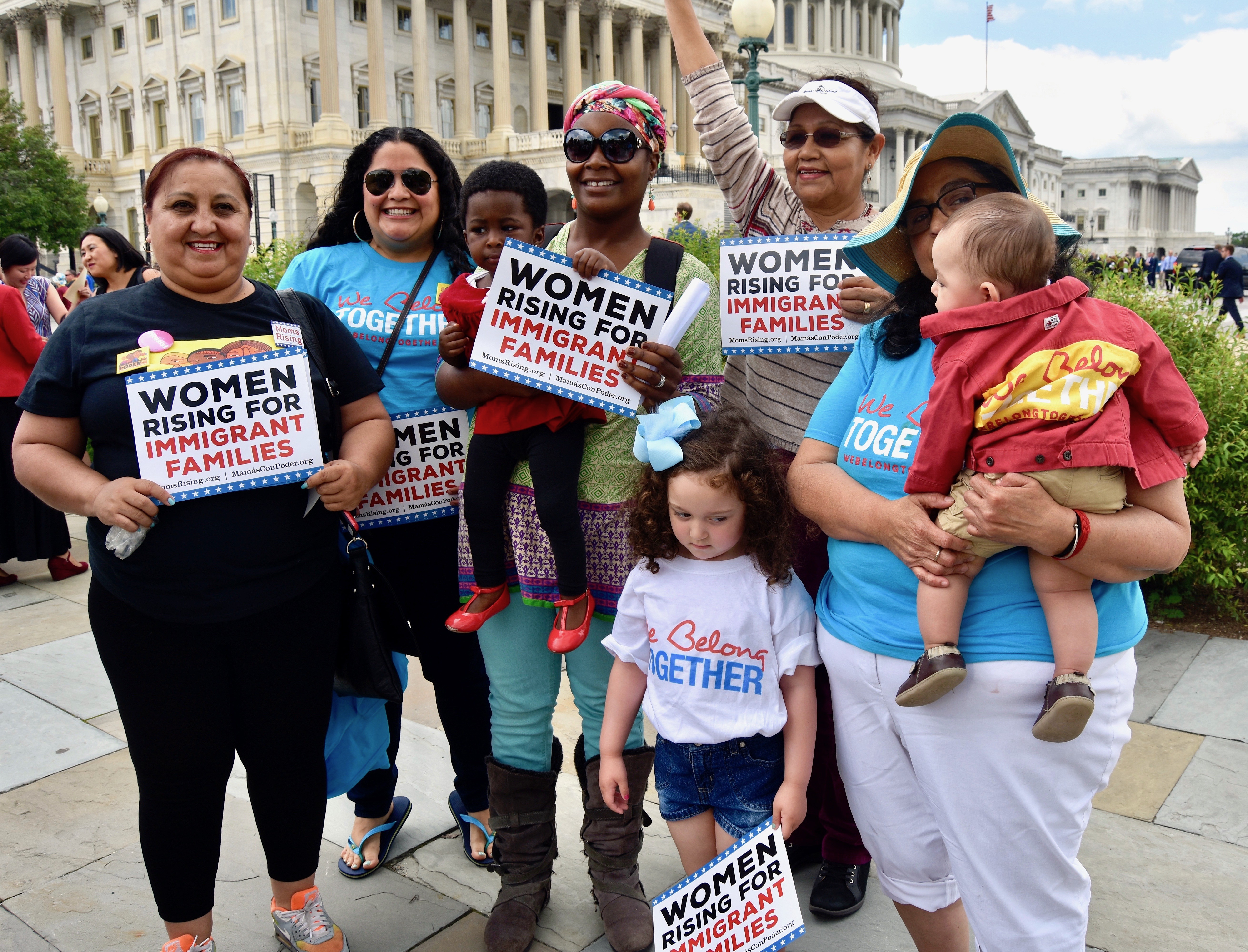 Moms and their children posed for photos at a press conference on Wednesday at the Capitol where Democratic lawmakers and activists called for open border immigration policies. (Penny Starr/Breitbart News).

Harris said she and Jayapal have introduced the “Detention Oversight Not Expansion Act” that would reduce the capacity of border detention centers. If the centers are reduced, border officials will be forced to release more migrant families into the United States because the existing detention facilities would be overwhelmed.

The press event is part of the large progressive pushback against the administration’s popular policy of enforcing the nation’s immigration laws. For example, Trump’s deputies are trying to end the “catch and release” policy which allow migrants to overwhelm border walls and flood into the United States in search of jobs. To close up this loophole Trump’s deputies are now holding adults in detention until their claims are processed, and they are sent home.

If the migrants bring children to help them get “catch and release,” the children are kept safe in facilities run by the Department of Health and Human Services until they can be reunited with their parent or parents as they are deported.

Progressives know that if border officials are forced to keep the children with their parents, then a separate legal rule — the 1997 Flores settlement — requires them to release the families after 20 days, even if their legal cases are still being processed.

Trump’s deputies are trying to close other loopholes. For example, deputies working for former President Barack Obama previously allowed women who reported they had been abused by a spouse or partner to gain asylum based solely on that claim. 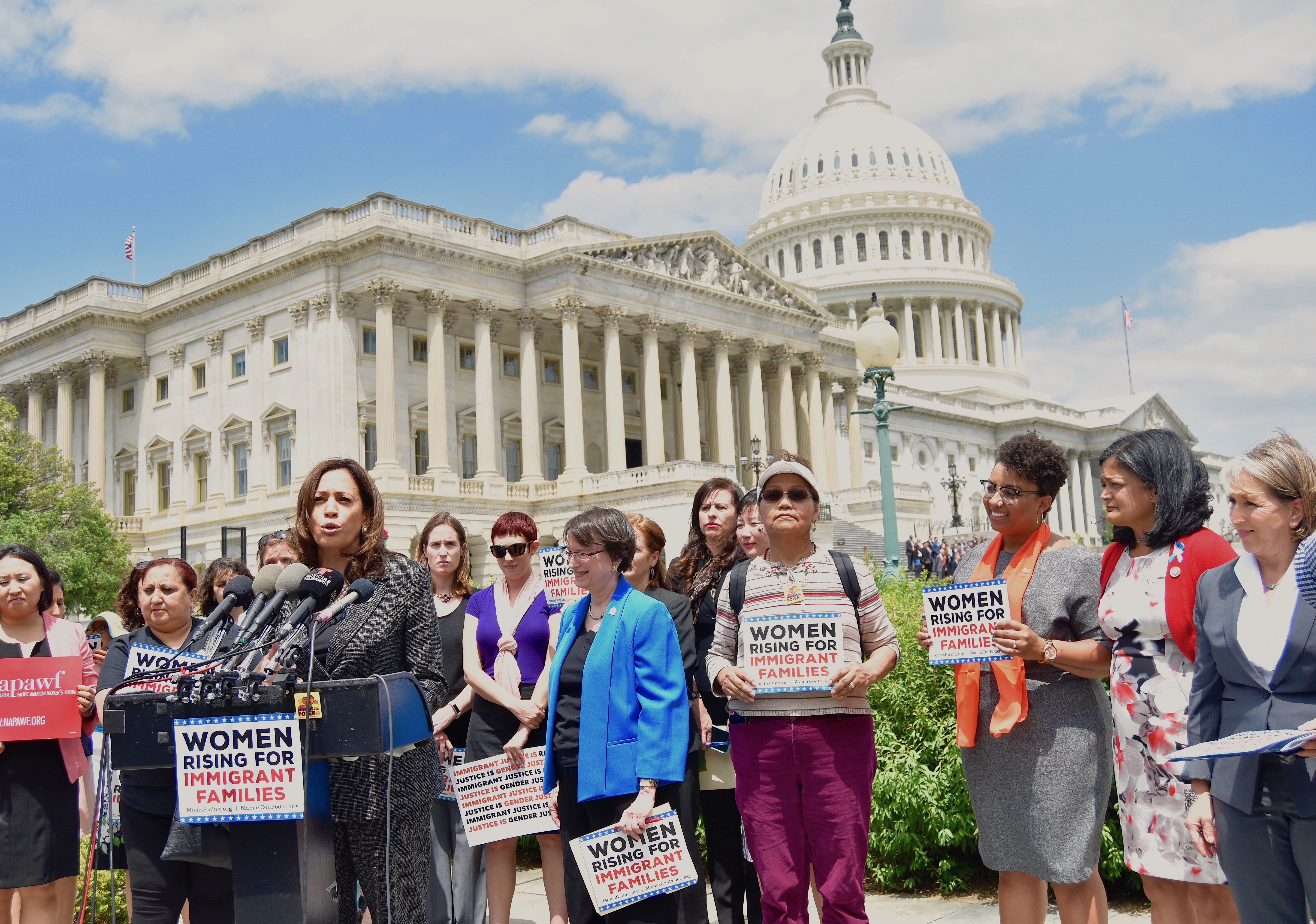 The activists and lawmakers slammed Trump for what they said are policies that mistreat children and pregnant women and separates families.

But none spoke about the impact of unlimited immigration has on American mothers and their children, and none of the lawmakers took questions from reporters.

Harris claimed that children separated from their mothers could face potentially lifelong impact because of  “trauma” and women who are pregnant and in immigration centers are deprived of proper care to the point that some suffer miscarriages.

.@SenCortezMasto: I will not stand by while this Administration continues to attack immigrant families — he rescinded DACA and TPS … and he is separating kids from their parents. Children can be detained for months at end. pic.twitter.com/3H9Phh9pl7

Harris said she and Jayapal have introduced the “Detention Oversight Not Expansion Act” to cut beds in detention centers and prohibit expansion or new construction of such centers.

“From the rhetoric on the campaign trail to every single immigration effort has all been designed to put fear into our communities; to lead by anger and hostility and to punish those among us who should be least punished,” Grisham said.

The letter sent to Congress includes a long list of alleged transgressions by the Trump administration, including “policies that endanger the lives and livelihoods of immigrant women, tear families apart, undermine fair pay, and leave children without the family members who love them.”

The letter said that immigrant women are no longer reporting rape or domestic violence because of fear of “enforcement” of immigration law and denounced Trump ending Deferred Action for Childhood Arrivals (DACA) and Temporary Protection Status (TPS) for individuals who no longer face threats in their homeland.

“As organizations that represent women and families, we reject this President’s treatment of immigrant women and children and call on Congress to enact policies that respect the sanctity of a family, create a common-sense and humane immigration process, and build a brighter future for the United States,” the letter concludes.

We signed onto this important @MomsRising letter released today: "We call on Congress…to enact legislation that affirms the dignity of immigrant women & children & protects our country." Grateful for @SenKamalaHarris' & @NancyPelosi's solidarity. https://t.co/R548FMAIWh https://t.co/Fa24HsMIiO

“Make no mistake, when pregnant immigrant women are being detained and denied the health care they need, it’s a women’s issue,” MomsRising Executive Vice President Donna Norton said in a press release distributed at the press conference. “When asylum-seeking parents fleeing gangs and state-sponsored violence come here only to be torn apart from their children – and when children are purposefully separated from moms by our government – it’s a women’s issue.”