When inflation is subtracted, the 9.4 percent nominal gain actually delivered a 7 percent real gain in just 15 months. If extended for the next three years, Trump’s lower-migration/higher-wages policy will deliver a real pay raise above 20 percent as employers compete to hire Americans instead of additional migrants.

Under former President Barack Obama, warehouse wages shrank while he opened or widened many avenues for migrants to join the U.S. workforce. The imported workers included up to 400,000 asylum seekers, 175,000 migrants given “administrative closure,” the 700,000 ‘DACA’ migrants, plus many other white-collar and blue-collar workers.

Many of the new warehouse workers are recently hired African-Americans and Latinos, according to a May study by the Progressive Policy Institute. Michael Mandel, the group’s chief economic strategist, reported:

Our analysis of BLS figures shows that workers at ecommerce fulfillment centers get paid roughly 30% more than brick-and-mortar retail in the same county. That’s an important gain, given that real wages in retail have barely risen for decades. Nationally, the average weekly wage for production and nonsupervisory workers in the ecommerce industries is $685, compared to $464 for brick-and-mortar retail. 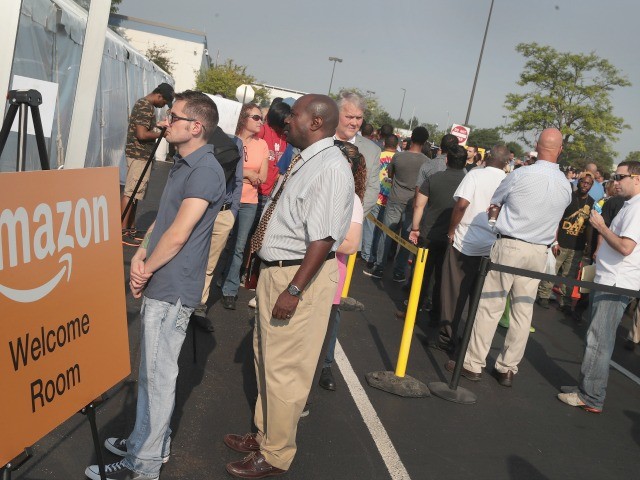 The rising wages also give employees a greater share of the productivity gains achieved by adding many robots to Amazon’s warehouses.

The rising wages for warehouse workers is a financial problem for Jeff Bezos, whose Amazon retail empire employs a reported workforce of roughly 300,000 employees. Trump is limiting the supply of imported workers, so Bezos and other warehouse employers are being pressured to raise wages for their huge workforces. 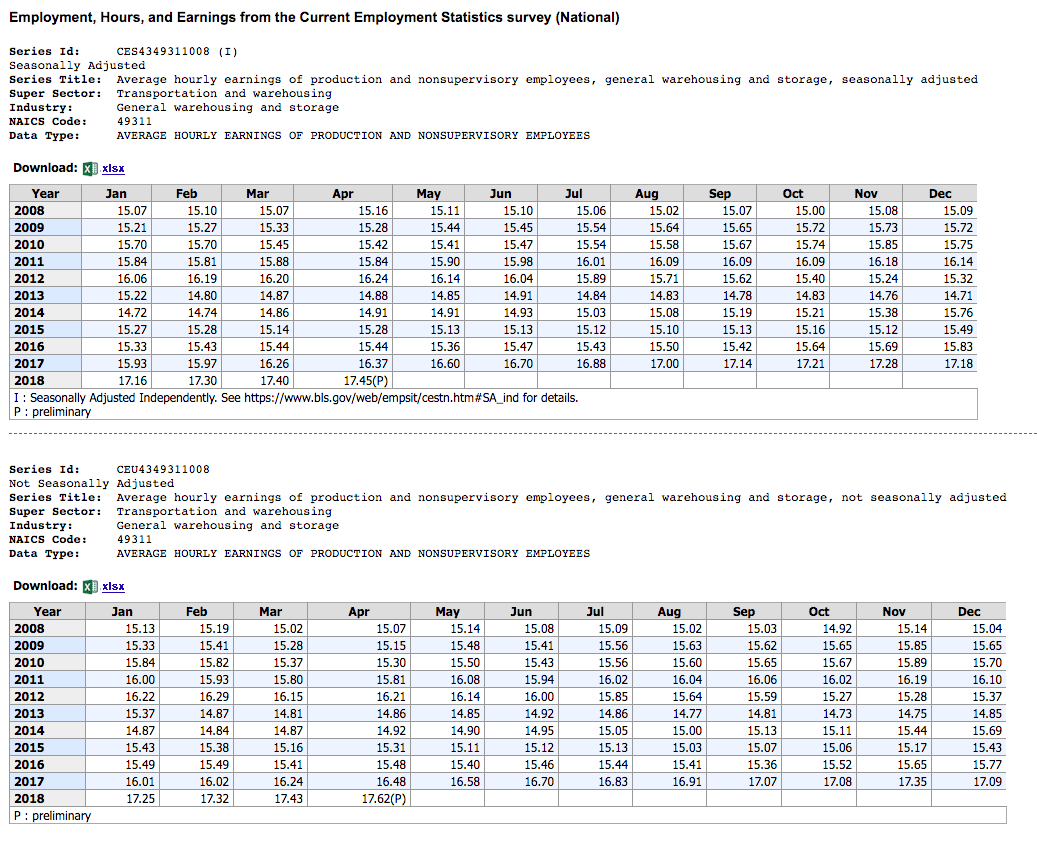 Amazon’s blue-collar wages are also a journalistic problem for any white-collar reporters at the Washington Post who cover immigration policy.

The reporters already face intense professional and corporate pressure to protect business’ access to cheap imported labor. For example, the newspaper’s editorial board has penned many editorials in favor of the DACA amnesty and of continued mass immigration, and it has panned Trump’s lower-immigration policies which are forcing employers to compete for the existing pool of employees.

Most reporters at the Washington Post ignore the economics of immigration and instead cover immigration via the elite-left racial and ethnic perspective. For example, in March, a Washington Post report echoed claims by the meatpacking industry that its apparent shortage of workers could be fixed by greater immigration instead of by offering higher wages to Americans and recent legal immigrants;

Asked whether his labor shortages have been exacerbated by the Trump administration’s immigration policies, JBS spokesman Cameron Bruett said the company was “proud to offer jobs to any qualified individual authorized to work in the United States.”

“The Administration has made a concerted effort to grow the economy and help businesses thrive through tax reform and a common-sense approach to regulation,” Bruett said in a statement. “We believe it will adopt a similarly pragmatic approach to workforce availability in agriculture and other labor-dependent sectors.”

It was an acknowledgment that a remedy for the labor shortage — “workforce availability” — would come from abroad.

Similarly, a June 3 Washington Post report described Florida GOP Rep. Carlos Curbelo as a “moderate” before quoting him saying that immigration policy should serve the interests of business groups, not of Americans. “The party should stand for an immigration system that complements our economy,” he said.

However, salaries for white-collar workers are also being pushed down by nation’s policy of growth via mass-immigration. 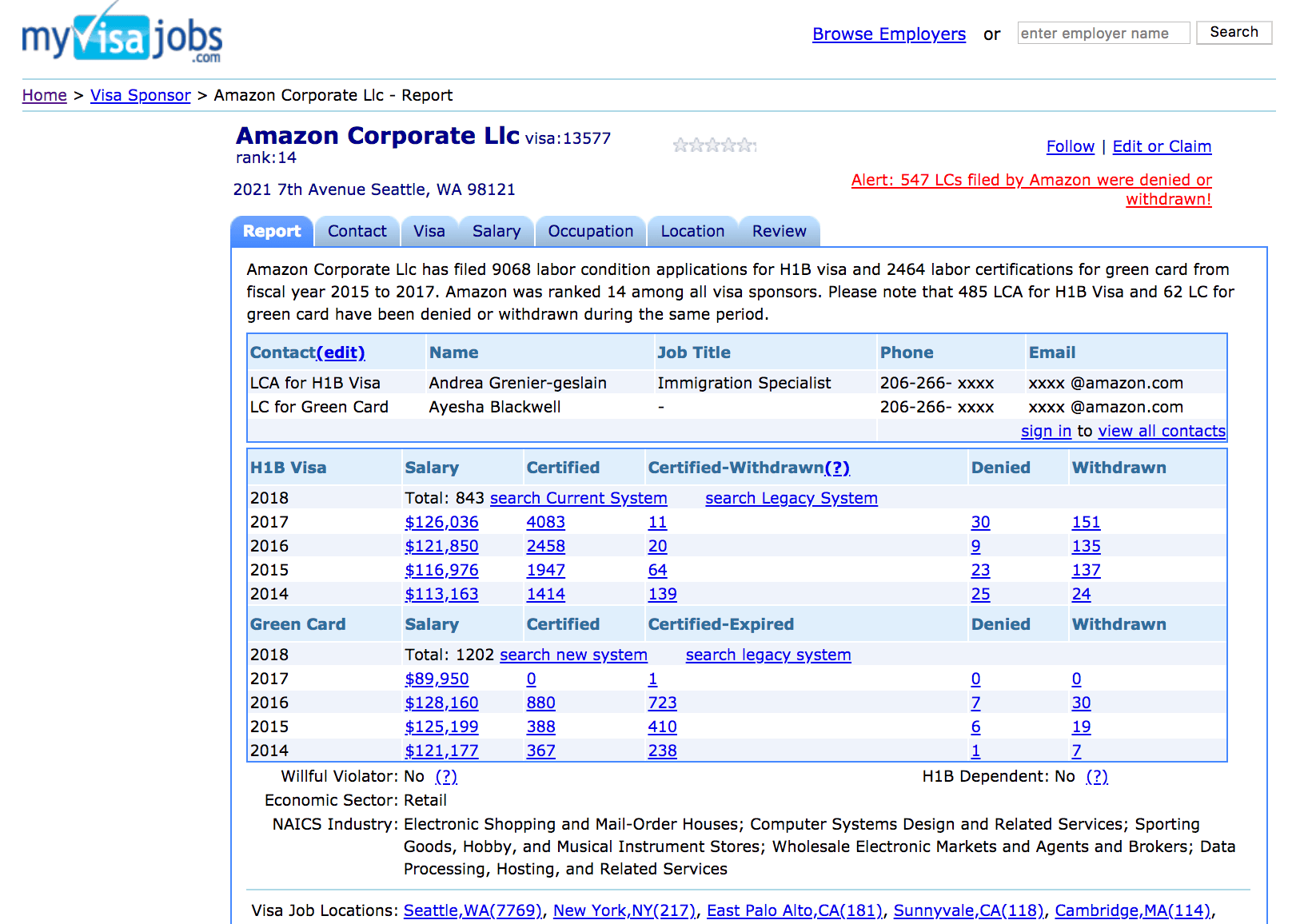 Bezos is also facing broad criticism for his company’s tough treatment of warehouse workers, who are required to maintain an exhausting pace as they fetch and pack goods bought via Amazon.com. Many of Bezos’ workers do not get company-paid benefits and are forced to supplement their wages with taxpayer-funded aid and welfare programs.

But the federal government’s ability to raise wages by restricting the migrant labor supply is a huge opportunity for GOP politicians — including Trump – who want to earn extra votes from blue-collar Americans and from recent immigrants. Amid the good economy and the slow rise in wages, Trump’s political ratings and the GOP’s generic-ballot score are moving upwards before November, even as GOP-affiliated business groups push for another wage-lowering amnesty.