On Tuesday’s edition of Breitbart News Tonight on SiriusXM, Mansour recounted in dramatic detail “the story of the personalities and political tensions that led the Continental Congress ultimately to declare independence from the British crown.”

She speculated that if Breitbart News had covered the Continental Congress “our readers would identify the most [with] John Adams because he was the quintessential figure there.”

Adams, she noted, was the undisputed leader of the faction of delegates who wanted to break from Great Britain. He led the debate and was, in the words of Thomas Jefferson of Virginia, “our colossus on the floor.”

“Adams had the foresight and the courage to see where this great endeavor was headed,” said Mansour. “He and all the other members of the New England delegation to the Continental Congress were for liberty from the get go.”

“We have to remember that New England was already at war,” she continued. “They were already bearing the brunt of British aggression. Remember that John Adams’ wife, Abigail Adams, was living in the midst of the war. Massachusetts at that time was occupied territory. The other colonies were hearing about the war, but Boston was an occupied city. Abigail Adams could hear the thunder of the bombardment of the Battle of Bunker Hill in 1775. She could hear it from their farm in Braintree, Massachusetts. So this wasn’t an intellectual discussion for John Adams. This was a matter of life and death, and he had witnessed deaths already. So the men of New England were for liberty right from the beginning.”

The real question was when to make the play for independence, she explained. “The only way to proceed was to do it unanimously. It had to be a united effort in declaring independence” otherwise the measure risked being voted down and “killed in its infancy.”

However, when the Second Continental Congress convened in Philadelphia in the spring of 1775, the delegates from the 13 colonies were nowhere near unanimous in their desire to break free from Great Britain. It wasn’t even a majority opinion. In fact, the delegates from New York, New Jersey, Pennsylvania, Delaware, Maryland, and South Carolina had “specific instructions from their folks back home not to vote for independence.”

Aside from the New Englanders, the other colonies were either too cautious to take such a definitive leap of faith or were loyalists who felt the king could be reasoned with.

“But these sentiments were gradually changing,” said Mansour. After King George’s appointed governor ordered the bombardment of Norfolk, Virginia, sentiment among the Virginia delegation started to slowly turn towards independence.

“That was no small thing because Virginia was the oldest and the wealthiest of the colonies,” she said. “They were the most prominent, so when Virginia starts to get some skin in the game and move towards independence, that’s when things started to change.”

John Dickinson of Pennsylvania became the leading voice opposed to independence. Dickinson, a Quaker pacifist, came up with the idea for the Olive Branch Petition of July 8, 1775, which would again humbly beseech King George III to restore peace.

Adams scoffed at “the very idea of sending another groveling supplication to King George after all that he did at Lexington, Concord, and Bunker Hill,” Mansour said. “Adams had seen the carnage the British had wrought in Massachusetts. He couldn’t believe anyone would be so naive to think that the British would go home and leave us in peace if we just ask them nicely. Adams would write: ‘Powder and artillery are the most efficacious, sure and infallible conciliatory measures we can adopt.’”

The petition was ignored by the king, who instead declared the colonies in a state of rebellion.

“By Spring of 1776, the idea of independence was being sparked in the hearts and minds of the people. It was the people who led,” Mansour said. “And it was helped in large part by a little pamphlet you might have heard of called Common Sense by Thomas Paine. As John Adams would later write, ‘The Revolution was in the minds and hearts of the people.’”

More of the delegates were freed by their conventions back home to vote for independence, but they still were cautious to proceed in unison.

“As Ben Franklin famously said, ‘We must, indeed, all hang together or, most assuredly, we shall hang separately.’ They were all being accused of treason.”

At the end of May 1776, General George Washington reported to the Continental Congress that King George had hired 17,000 German mercenaries to fight the colonists and an attack on New York was imminent.

“It was clear the king was at war with them. There was no going back,” Mansour said.

Soon after this, the Virginia delegation received instructions “to declare the United Colonies free and independent states.”

“That was the turning point,” she said. “This is what the moment the New Englanders had been waiting for all along. Once Virginia got in the fight, it was on.”

On Friday, June 7, 1776, Richard Henry Lee of Virginia took to the floor to introduce the following motion: “Resolved: That these United Colonies are, and of a right ought to be, free and independent states, that they are absolved from all allegiance to the British Crown, and that all political connection between them and the state of Great Britain is, and ought to be, totally dissolved.”

“Adams jumped to his feet and seconded the motion,” Mansour said. “But then the real debate began because Dickinson of Pennsylvania and his faction demanded a ‘cooling off’ period. They said they wanted the voice of the people to be heard before the vote. Of course, Adams argued against that, saying that the people are already behind this. They’re just waiting for us to lead them. But, again, they all decided to proceed with caution.”

Ultimately, it was agreed to delay the vote until July 1 to allow the delegates time to request new instructions from home about whether to vote for independence. In the meantime, a committee was assembled to draft a statement declaring independence should the vote move in that direction. Thomas Jefferson of Virginia was tasked with writing it.

Mansour dramatically recounted the events of the July 1 debate, as the gavel was sounded on that hot day in Philadelphia while a summer storm was brewing outside.

Rain pelted against the windows as John Dickinson of Pennsylvania rose one last time to argue against what he characterized as the “premature” separation from Great Britain.

“He spoke eloquently and passionately,” Mansour said. “He argued that to declare independence would be, in his words, ‘to brave the storm in a skiff made of paper.’”

In the silence that followed, “everyone felt the weight of that moment and the decision that laid before them. And then finally John Adams stood to make the case for liberty,” she said.

While thunder and lighting began to strike outside, Adams made his argument “mindful that this was an immense historic moment for all of human history – this moment when a free people were deciding for themselves to be self-governed.”

“We don’t have his exact words because he never gave prepared remarks. But we know the sentiments because he wrote to a friend at that particular time,” Mansour said, reciting Adams’ letter:

Objects of the most stupendous magnitude, measures in which the lives and liberties of millions, born and unborn are most essentially interested, are now before us. We are in the very midst of revolution, the most complete, unexpected, and remarkable of any in the history of the world.

Mansour explained that even though we have no transcription of Adams’ remarks, we have the recollections of the people who were there, including Thomas Jefferson, who wrote that Adams spoke “with a power of thought and expression that moved us from our seats.”

New Jersey’s delegate Richard Stockton described Adams as “the man to whom the country is most indebted for the great measure of independency … He it was who sustained the debate, and by the force of his reasoning demonstrated not only the justice, but the expediency of the measure.”

The final vote was postponed until the next day, July 2. They were still persuading the final holdouts and also waiting for Caesar Rodney of Delaware, a proponent of independence, to arrive to swing the Delaware vote.

On July 2, all the pieces came together. Caesar Rodney arrived in the nick of time, having ridden 80 miles through the night to be in Philadelphia to cast a defining vote to move the Delaware delegation to independence. South Carolina also finally joined the majority.

Recognizing the need for unanimity, John Dickinson and Robert Morris of Pennsylvania voluntarily stayed home that day so that their votes would not prevent the Pennsylvania delegation from joining the other colonies in voting for independence.

The New York delegation, whose homes were currently facing threat of destruction, abstained from voting so that the final vote would be unopposed and therefore unanimous.

Mansour read the letter John Adams wrote to his wife Abigail that day:

The second day of July 1776 will be the most memorable epocha in the history of America. I am apt to believe that it will be celebrated by succeeding generations as the great anniversary festival. It ought to be commemorated as the Day of Deliverance by solemn acts of devotion to God Almighty. It ought to be solemnized with pomp and parade, with shows, games, sports, guns, bells, bonfires, and illuminations from one end of this continent to the other from this time forward forever more.

The next day, Congress debated the wording of the Declaration that Thomas Jefferson had drafted.

“They cut out about a quarter of what he wrote,” Mansour said. “But everyone agreed one passage rang out like poetry that lit a fire in men’s hearts around the world and it still lights a fire to this day. And it’s these words”:

We hold these truths to be self-evident, that all men are created equal, that they are endowed by their Creator with certain unalienable rights, that among these are life, liberty, and the pursuit of happiness. That to secure these rights, governments are instituted among men, deriving their just powers from the consent of the governed.

One final edit they all agreed upon was “to add a key phrase to Jefferson’s concluding line in the Declaration of Independence that would commend their entire endeavor to God’s protection,” she said, reciting the passage:

And for the support of this Declaration, with a firm reliance on the protection of divine Providence, we mutually pledge to each other our lives, our fortunes, and our sacred honor.

“And so, my friends, that is how our country was born by Declaration,” Mansour concluded. “And I personally have to say, I don’t care where you come from originally, what you look like, or who your ancestors were, if you affirm that Declaration – if you today stand as our Founders did and bind yourself to those sentiments in that Declaration – then you are an American. You are part of the Spirit of 1776. And that’s the spirit that will sustain us, by the grace of God.” 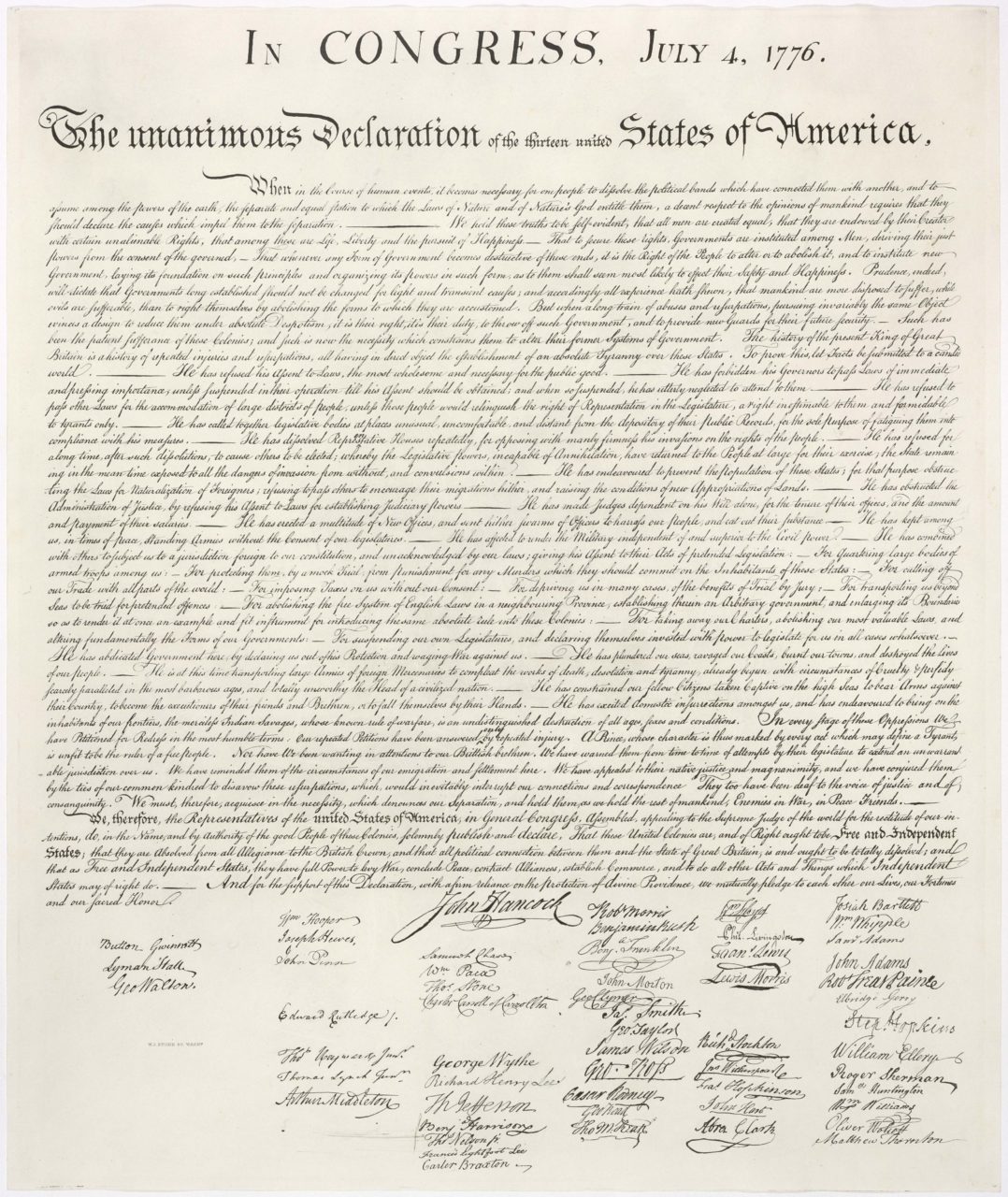