The establishment media and a TV manufacturer are blaming President Trump’s tariffs on cheap, Chinese imports for the closure of the company whose product is made in China.

This week, the establishment media has used the closure of Element Electronics, a small manufacturing plant in Winnsboro, South Carolina, where 126 workers will be laid off, to attack Trump’s tariffs on imported Chinese goods.

In a statement about the layoffs, Element Electronics executives said the announcement is due to Trump’s tariffs on imported Chinese goods, writing, “the layoff and closure is a result of the new tariffs that were recently and unexpectedly imposed on many goods imported from China, including the key television components used in our assembly operations in Winnsboro.”

The only problem with the media’s claim? This “last major TV factory,” as Time Magazine described Element Electronics, makes its products in China and only assembles some of its television sets in South Carolina.

Time Magazine described Element Electronics as the “last major TV factory” in the United States, despite the company not making any of its products in the U.S. (Screenshot via Time Magazine)

In a 2014 piece about Element Electronics, the left-wing blog ThinkProgress reported how a complaint was filed with the federal trade commission that accused the TV manufacturer of falsely claiming that their product was made in America when it is actually made in China. 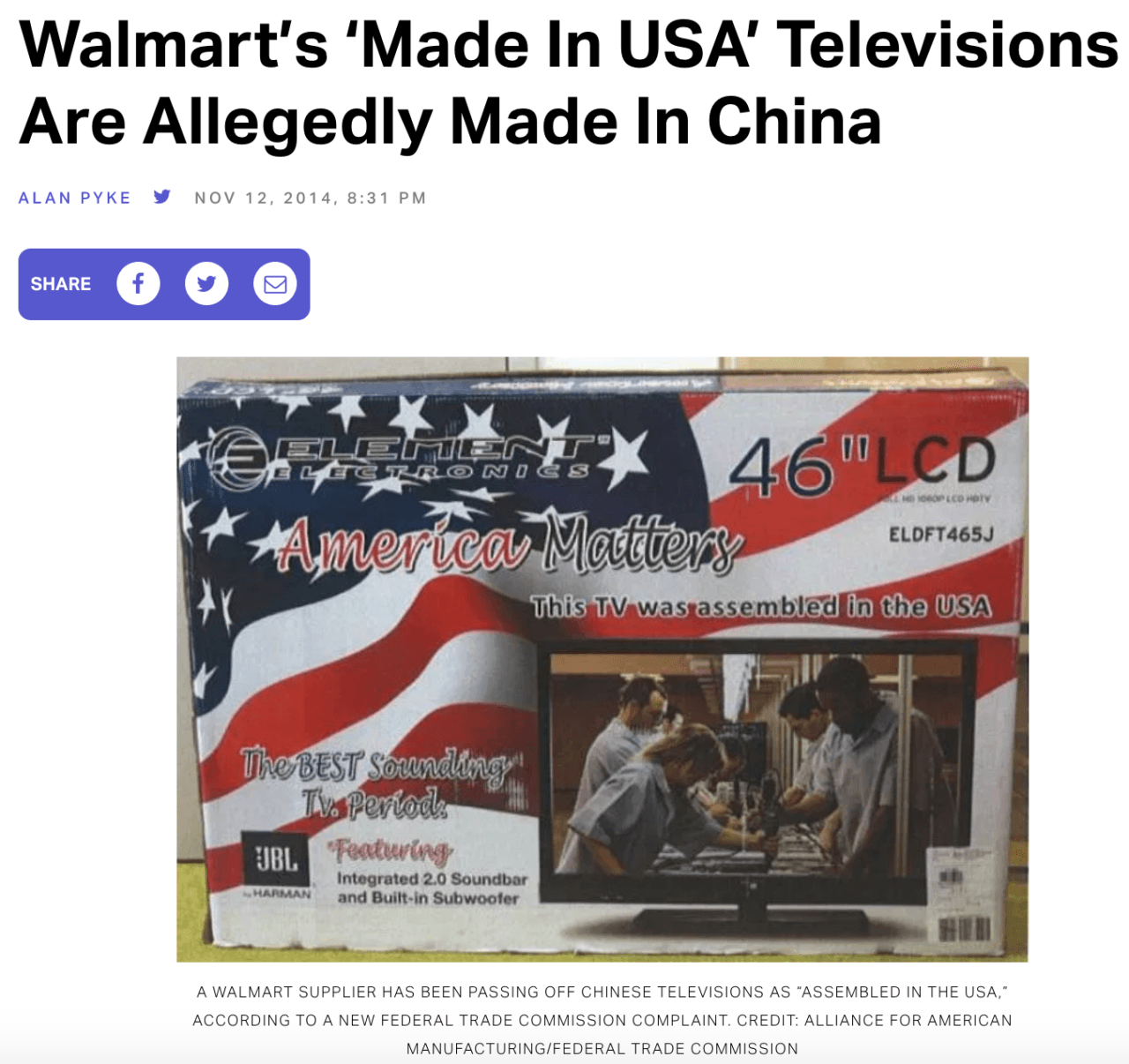 In 2014, ThinkProgress reported how Element Electronics has used patriotic “assembled in the USA” packaging to give the illusion that the product is not made in China. (Screenshot via ThinkProgress)

Instead, the complaint alleges, the Chinese-made TVs arrive to Element’s South Carolina assembly line in boxes adorned with a waving American flag and the slogan “America Matters” on the front and the phrase “assembled in the USA” on top. Element’s employees unscrew a plastic panel, install a Chinese-made motherboard, close the panel, and return the TVs to their patriotic packaging so that they can be shipped out to Walmart, Target, Meijer, Sam’s Club, and QVC. That depiction of Element’s assembly process comes from a July article in the Wall Street Journal.

The Journal article is the key evidence in the FTC complaint, which was filed by a non-partisan non-profit group called the Alliance for American Manufacturing (AAM). AAM’s blog had previously touted Element Electronics as an example of manufacturing jobs returning to the U.S., but in Tuesday’s complaint it asks the FTC for an injunction barring Element from saying that their televisions are assembled stateside.

A product cannot be advertised as assembled in America, according to FTC rules, unless it undergoes a “substantial transformation” on U.S. soil. Furthermore, the AAM complaint notes, the FTC rules offer a specific example of an assembly process that would not qualify — and that example “is strikingly similar to the facts as they relate to Element’s ‘assembly’ process.” The example describes a computer built from foreign-made parts that “then are put together in a simple ‘screwdriver’ operation in the U.S.,” reminiscent of what the Journal found upon visiting Element’s South Carolina facility.

Since Trump has implemented tariffs to protect American industries and jobs from cheap, foreign imports being dumped at unfairly low prices in the U.S. economy, the establishment media has been on a crusade to protect the free trade apparatus that relies on American businesses outsourcing their workforces to undeveloped, low wage foreign countries.

Researchers with the Coalition for a Prosperous America say for every billion dollars of net imports to the U.S., 6,000 American jobs are eliminated in the economy.

After the North American Free Trade Agreement (NAFTA) was implemented, American manufacturing employment plummeted with more than 5.5 million manufacturing jobs being eliminated since 2000.

Since 2001, free trade with China has eliminated at least 3.4 million American jobs for U.S. workers, as Breitbart News reported.