Federal legislators are exploiting the opioid crisis to boost their own special interests, such as regulating doctors and prescription drug companies, as well as opening jail cells.

The loud push for these supposed fixes also distracts voters from the real source of the problem – the politicians’ indulgence of loose borders, the inflow of foreign-manufactured drugs, and the toleration of drug distribution by illegal aliens.

The National Institute on Drug Abuse used Centers for Disease Control data to prepare a set of graphs illustrating the problem. The first graph makes the steadily climbing rate of drug overdose deaths in the United States chillingly clear: 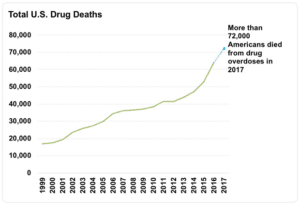 The second graph charts what type of drugs were involved in the overdoses. The line that blasts off into orbit beginning around 2014 represents “synthetic opioids other than methadone,” which largely means fentanyl. The next most lethal line beneath it represents heroin: 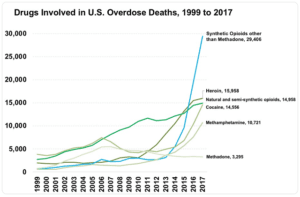 Writing at the American Spectator on Tuesday, David Catron suggested the opioid epidemic has been misdiagnosed and politically exploited in the manner captured by former Obama chief of staff Rahm Emanuel’s infamous quote: “You never let a serious crisis go to waste” because they present “an opportunity to do things you think you could not do before.”

Catron charged politicians with ignoring some facts while exaggerating others to reframe the opioid crisis in a way that supports maximum government intervention, to the great dismay of pain patients who become collateral damage.

They are suffering because politicians want to address the problem in a fashion that favors their agendas and worldview, the allegedly insufficient regulation of prescription drugs. Conversely, the political class sees no profit in addressing the real problem: weak borders, drug smuggling, and foreign crime organizations operating in the United States.

One politician who has no problem addressing those issues is, of course, President Donald Trump.

Unfortunately, his calls for action tend to be dismissed by other politicians and the media as cynical attempts to play the xenophobia card for his personal political gain. A growing partisan divide exists between voters who blame prescription drugs or street drugs for the opioid crisis:

It is outrageous that Poisonous Synthetic Heroin Fentanyl comes pouring into the U.S. Postal System from China. We can, and must, END THIS NOW! The Senate should pass the STOP ACT – and firmly STOP this poison from killing our children and destroying our country. No more delay!

The Synthetics Trafficking and Overdose Protection (STOP) Act referred to by President Trump passed the House in June. It is an effort to cut the flow of deadly fentanyl into the United States by improving the U.S. Postal Service’s ability to track packages from overseas that might contain the drug.

Trump is correct that fentanyl plays a huge role in overdose deaths, a truth the public is slowly becoming more aware of due to a string of celebrity overdose stories, from musicians Prince and Tom Petty to the most recent case, Demi Lovato. The mass overdose of more than 75 people in New Haven, Connecticut, last week was evidently caused, in part, by synthetic marijuana laced with fentanyl.

Lovato’s case is sadly instructive because she apparently did not know the drugs she purchased from a street dealer were laced with fentanyl. Secretly infusing fentanyl into their products to increase the potency at low cost is a common practice among dealers. It is killing as many people as the long-feared terrorist WMD attack on an American city would. The New Haven overdose looked like a terrorist attack to horrified witnesses as victims collapsed in broad daylight.

Catron noted that the opioid crisis has been used to justify an enormous expansion of regulatory power over doctors and drug companies, even though the assertion that prescription drug abuse started the explosion of overdose deaths clearly is not true. The fact that overdose deaths keep rising even as prescriptions decline is a difficult clue to ignore, but somehow the federal government managed to ignore it.

Chronic pain patients and their advocates complain the crusade against prescription medications is misplaced because street drugs are the real cause of the deadly drug crisis and is causing enormous harm to people who cannot get the pain medicine they need. The Associated Press (AP) last week quoted patients who said they have been treated like criminals and denied access to the drugs they need, even when they present detailed medical records and comply with every rule.

Patients told the AP they understand the awful dimensions of the drug crisis and are willing to make sacrifices to help, but the crusade against prescription medicines has gone too far. Some critics charge it has become a true “witch hunt,” because doctors are being targeted based on the amount of painkillers they prescribe, which gives doctors a powerful incentive to under-prescribe pain medication to keep themselves off the target list.

The AP article included the interesting observation that many of the deaths attributed to prescription drugs actually involved people mixing pharmaceuticals with “illicit drugs such as cocaine, heroin, or fentanyl.” Deaths from overdosing on prescription opioids have actually been fairly constant over the past decade, even as deaths from street drugs skyrocketed and the opioid crisis became a huge national story.

The response to the overdose epidemic has also managed to ignore the role of the one medical program that demonstrably has put more opioids into the hands of people who abuse them: Medicaid.

It is another blindingly obvious but somehow completely obscured fact that the 19 states that opted out of Obamacare’s Medicaid expansion did not experience the same spike in overdose deaths as the states that stayed in – a spike that occurred immediately after the Medicaid expansion went into effect in 2014.

Daniel Horowitz at Conservative Review connected the dots on Monday and warned that the fentanyl crisis is being exploited to push another political agenda the American people do not want: “criminal justice reforms” that will put a huge number of criminals back on the street.

The gang of jailbreak in Washington sold their back-end early release bill as simply “prison reform” and promised they wouldn’t add on front-end sentencing reductions. Now they are planning to add some provisions from the sentencing bill that will create a cascade of leniencies for top-level heroin and fentanyl traffickers, MS-13 gang members, and career firearm felons. And these are just the counts they are convicted of. Many, particularly in the federal system, often have a career of violent crime leading up to these convictions.

The schizophrenic approach of this administration to the drug trafficking and national poisoning crisis is incomprehensible. On the one hand, the president has been railing against drug traffickers and jailbreak legislation his entire life and particularly during the campaign. He still calls for the death penalty for top-level traffickers. The White House sent out an email on Wednesday lauding its “zero-tolerance policy toward synthetic opioid trafficking” and talking about punishing fentanyl distributors. Yet Jared Kushner and much of his Koch-pushed legislative affairs shop is promoting a bill that will dramatically cut front-end and back-end prison time for these very “animals” the president decries.

The technique of manufactured crisis involves overwhelming systems and making them collapse so agendas of radical change can be imposed. Stuffing the prisons full of drug offenders and then pushing jailbreak bills by lamenting the crisis of overcrowded prisons is a fine demonstration of the tactic. It might not have been a micromanaged conspiracy, but it definitely did begin with the political decision to open America’s borders and savagely attack anyone who complained about the resulting wave of drugs and organized crime.

But who wants to address a queasy problem like that–implicating the political class in a deadly overdose epidemic and inviting charges of racism and class warfare from activists when, instead, it is so much easier and more profitable to crack down on doctors and deep-pocketed drug companies?