The Administration is calling fake news on a Washington Post claim that the government is “surging” the denial of “passports to Americans along the border, throwing their citizenship into question.”

This is an irresponsible attempt to create division and stoke fear among American citizens while attempting to inflame tensions over immigration.  Under the Trump Administration, domestic passport denials for so called ‘midwife cases’ are at a 6-year low. The reporting is a political cheap shot.

The Post story has loosed an avalanche of Tweets, statements, and denunciations aimed at spurring Latino turnout in November.

The agency provided a point-by-point rebuttal, complete with graphics:

FAKE NEWS: “[U]nder President Trump the passport denials and revocations appear to be surging, becoming part of the broader interrogation into the citizenship of people who have lived, voted and worked in the United States for their entire lives” (Washington Post 8-30-18)

FACT: For decades, some midwives and physicians along the Mexico-U.S. border provided United States birth certificates to babies actually born in Mexico.  Many questions related to fraudulent birth certificates issued by midwives and others were documented during the 2009 proceedings of Castelano v. Clinton, in which midwives admitted to issuing fraudulent birth documents. Midwives falsely reporting births in exchange for compensation is an old problem that is not unique to the Trump Administration. In fact, the administrations of Presidents George W. Bush and Barack Obama, denied passports in these cases as a result. The Washington Post reported on this issue in September 2008: “The federal government won convictions against dozens of South Texas midwives from 1967 through 1997 for fraudulently registering births that they did not deliver, a U.S. official said, with most convictions coming after 1980.”

FAKE NEWS: “The Trump Administration is accusing hundreds, and possibly thousands of Hispanics along the border of using fraudulent birth certificates since they were babies, and it is undertaking a widespread crackdown… [U]nder President Trump the passport denials and revocations appear to be surging, becoming part of the broader interrogation into the citizenship of people who have lived, voted and worked in the United States for their entire lives” (Washington Post 8-30-18)

FACT: The State Department’s domestic passport denials are at the lowest rate in six years for midwife cases.  Twenty eight percent of these passport cases were denied in 2017 compared to 36 percent in 2015 under the Obama Administration.  Based on the current numbers for the year, the department continues to show a decline in denials to passport applicants – the lowest rate of passport applicant denials in six years (please see chart below).  There is no “surge” in denials or revocations related to midwives’ cases, as reported.  The U.S. State Department Bureau of Consular Affairs fully complies with policies and practices from 2009. 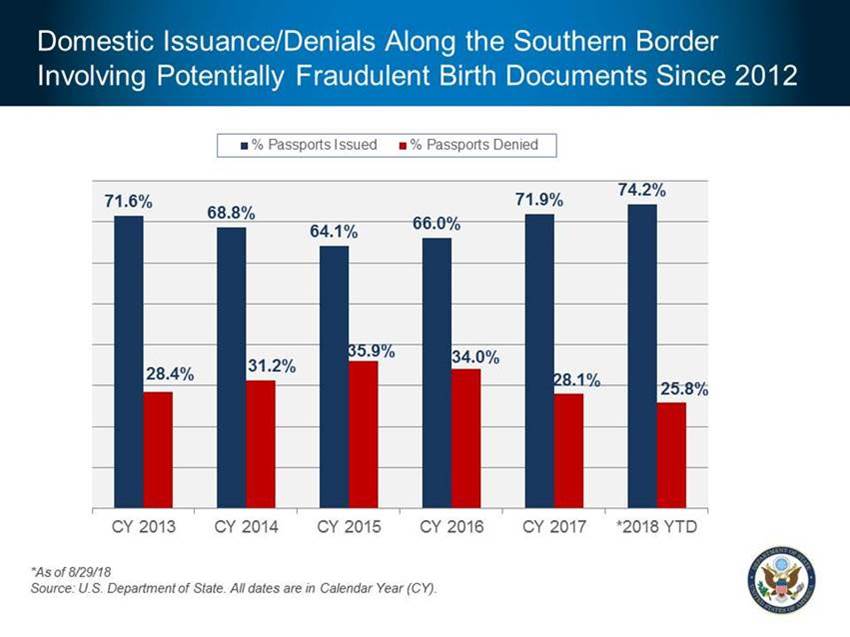 FAKE NEWS: “Now, the administration appears to be taking aim at a broad group of Americans along the stretch of border where Trump has promised to build his wall, where he directed the deployment of National Guardsmen and where the majority of cases in which children were separated from their parents during the administration’s ‘zero tolerance policy’ occurred.”

FACT: Again, the policy has not changed. This is a citizen fraud challenge dating back to the administrations of Presidents George W. Bush and Barack Obama. The U.S. Department of State Bureau of Consular Affairs continues to issue passports to applicants based on their applications and evidence, following policies on these types of case that have been in place since 2009.

The 2008 Washington Post article described the massive scale of the birth-certificate fraud:

The State Department is denying passports to people born in southern Texas near the border with Mexico if they were delivered by midwives, citing a history of birth certificate forgeries there for Mexican-born children dating to the 1960s, according to U.S. officials …

An INS list last updated in October 2002 identifies at least 65 midwives who have been convicted of fraud since the 1960s. U.S. officials previously said cases in the 1990s uncovered forgeries for about 15,000 people born in Mexico. By comparison, about 21,000 Texas births were certified in 2004 by midwives, an integral, though shrinking, part of South Texas culture.

The issue is receiving new urgency because of the Western Hemisphere Travel Initiative, which requires a passport to cross the U.S.-Mexico land border starting in June. A similar requirement for air travel last year led to a surge in applications for passports and a massive processing backlog.

So the State Department is denying the WaPo story about passport revocation. Normally this would carry some serious weight, BUT we all watched for weeks as the Trump admin denied the child separation policy AFTER FIRST BRAGGING ABOUT IT.

The Post‘s story created a sensation on the left:

They served in the army, the border patrol and the police. They have official US birth certificates. But the government is denying their passport applications and telling them they aren't American citizens. https://t.co/UOITShU6F8

“I served my country. I fought for my country.” An Army veteran born in Brownsville, TX was was denied a passport and Trump's State Department is now accusing him of being in the country illegally. https://t.co/51wt6aOUEM

“Under Trump, the passport denials and revocations appear to be surging, becoming part of a broader interrogation into the citizenship of people who have lived, voted and worked in the United States for their entire lives.” https://t.co/iXZtBfZXeo

If a US citizen asked me whether they should carry around their US passport, I can no longer in good faith tell them they don't have to.

With me on this?

This must stop. It must be investigated immediately. My office is working on the case of a veteran who is being denied a passport and having his citizenship challenged. If you are experiencing a similar problem, please call my office at 210-348-8216 or 202-225-3236. 2/2

The latest immigration outrage from Trump’s agencies. Wonder how many of the targets here are white? Just curious … https://t.co/pAuet6ibfo

What is incredible abt this process is that it's happening outside the courts; State/DHS are just declaring people w/US birth certificates and/or passports non-citizens, then forcing them to prove it, go to court to have citizenship re-established. USG has no burden of proof. https://t.co/EKhwqRITeO

Sen @brianschatz is spot on. The Trump administration is openly challenging the U.S. citizenship of U.S. citizens born on U.S. soil. https://t.co/ZZAEVYhTYL

Other progressives are jumping into the dispute: